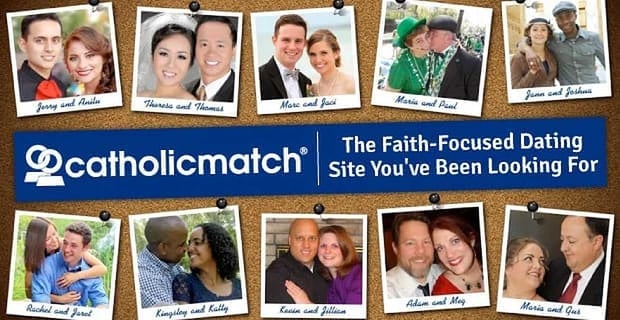 CatholicMatch: The Faith-Focused Dating Site You’ve Been Looking For

The 411: For the past 16 years, CatholicMatch.com has been the #1 dating site dedicated to creating more lasting marriages by bringing together singles of that particular faith.

In the ’90s, when the Internet and online dating were just getting started, there weren’t that many options for Catholic singles. That is, until CatholicMatch.com came along.

Originally called SaintRaphael.net, CatholicMatch was founded in 1999 by Jason LaFosse and Brian Barcaro, who came up with the idea while discussing the struggles Catholic singles face at a church picnic.

There was clearly a need for a community where Catholic men and women could find their future spouse, and LaFosse and Barcaro were going to fill that need.

CatholicMatch.com is the largest and most successful website for single Catholics.

A few years after the launch, LaFosse and Barcaro teamed up with Mike Lloyd and took CatholicMatch to the next level with online communication and other innovative features.

Sadly the team lost Lloyd in 2014 due to a sudden illness, but his legacy still lives on in the amazing work CatholicMatch does, which Editor Robyn Lee was kind enough to discuss with us.

With more than 200,000 members (60 percent female and 40 percent male) ranging in ages from 18 to 80, CatholicMatch has to stay on top of its game, and they’ve certainly been able to do that.

From community forums to chat rooms to private messaging, CatholicMatch provides the tools and opportunities users need to take control of their own dating success.

The team also takes a personalized approach when it comes to customer service, going out of their way to help every single member — from those who need simple online dating guidance to those who need help uploading photos (this is the only dating site that allows users to send in physical photos to be scanned and uploaded by the staff!).

From community forums to chat rooms to private messaging, CatholicMatch provides the tools and opportunities users need to take control of their own dating success.

“The thing that we’re really proud of is we have a really great security team that combines technology and real human investigators to make sure our site is not just safe but the kind of supportive community that our members want to be a part of,” Lee said.

CatholicMatch knows its audience and their specific needs, and it’s easy to see that they work hard to support those needs.

“We have a really specific niche market that are interested in faith-focused dating that will hopefully lead to strong, lasting marriages, and that’s important to Catholics. That’s why it’s important to have a site like CatholicMatch — for Catholics to come and find people like them,” she said.

Success That Serves as Inspiration for Others

Not only is CatholicMatch having a positive influence on its members and the dating industry as a whole, but it’s also making a significant impact on the Catholic community, creating more marriages and offering support for those marriages thanks to its services and sister sites like the CatholicMatch Institute and NationalCatholicSingles.com.

“We really try to strengthen marriages and help people better discern dating and marriage. With the CatholicMatch Institute, we have resources and articles and a weekly newsletter, and we really try to better educate our members to be better daters, to really date with marriage in mind and to help them make better choices,” Lee said. “We try to be a service to single Catholics in a way that goes beyond our dating site, and that’s something that we’re really proud of and we really try to promote.”

“We are humbled to receive new stories on a weekly basis,” Robyn Lee said.

And the proof is in the thousands of success stories you can see on the site.

“Our success stories serve as a source of hope and inspiration for other members who are still searching, and we are humbled to receive new stories on a weekly basis,” she said. “We get tons of feedback from people who say they’ve met their spouse through CatholicMatch. The positive feedback we get really keeps us going.”

Over the past 16 years, CatholicMatch has solidified itself as a leader in the dating world and the Catholic community, and the next 16 years look to be just as impressive.

More focus will go to developing the CatholicMatch Institute into a hub that teaches singles how to become more purposeful daters and couples how to strengthen their existing relationships.

But CatholicMatch’s overall goal is to constantly make the online dating process easier for its members and to continue to be the trustworthy tool that helps those who want to get married get married.

“In the early days, we never thought we would end up building the largest and most successful website for single Catholics. But here we are, and it never gets old,” Barcaro said. “Every single time we receive the story of a happy couple, photos of newborn babies or a thank you note for fostering a community through our website, it is both moving and humbling. We love what we do, and we hope you’ll join us on this journey.”