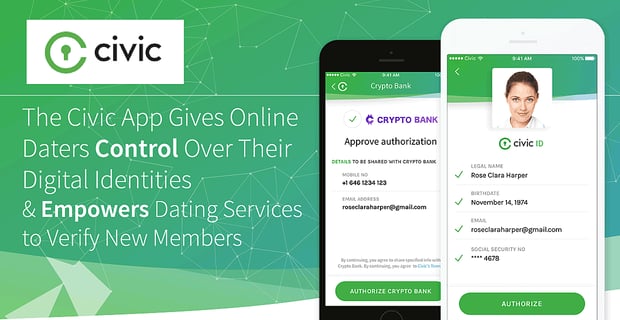 The Short Version: In response to the online privacy crisis, Civic has designed groundbreaking mobile authentication tools for consumers and businesses. The Civic App provides users with a digital identity that uses biometrics to protect an individual’s identity, and it empowers the average consumer to keep private information, including credit card numbers and passwords, safe from prying eyes. These tools can make the online dating experience more trustworthy and secure from start to finish.

In July 2015, a group identified as The Impact Team infiltrated Ashley Madison’s database and stole the personal records of its users. Ashley Madison had served as the dirty little secret for married individuals who joined to seek an extramarital affair, but now the secret was out and their information was in the hands of cybercriminals.

The hackers attempted to blackmail the dating site into shutting down. However, when Ashley Madison’s parent company, Avid Life Media, didn’t cave in to their demands, they released over 25 gigabytes of private company data. This leaked information held millions of user passwords, full names, home addresses, search history, and credit card records. “Too bad for ALM,” the hackers wrote on the dark web. “You promised secrecy, but didn’t deliver.”

The Ashley Madison data breach represents the worst-nightmare scenario for online daters and online dating services. People join dating sites to fall in love, but they can fall prey to identity theft and other scams if they’re not cautious.

Civic is a revolutionary tech company on a mission to give consumers and businesses a safe way to store and share personal information.

Fortunately, a tech company called Civic has come to the rescue of consumers and developed identity verification tools that can help businesses maintain a robust online security system. Dating services can partner with Civic to create a safer future for everyone online.

Chris Smith, Civic’s Vice President of Business Development, told us the company has leveraged a blockchain-based digital identity platform to address today’s online privacy concerns and shore up the vulnerabilities in large online databases. Anyone can download the Civic App and use it to control and protect their digital identities, which could be an interesting use care for dating sites.

Civic is currently building toward a more secure and privacy-conscious future by partnering with businesses around the world. For instance, the company recently announced it will work alongside Telefónica to raise awareness about the importance of cybersecurity.

“We want to give people a way to protect who they are online,” Chris said. “Since we’re all attached to our smartphones all day long, we believe it’s best to give consumers a tool they can access from their phones.”

Civic was initially inspired by the idea of voting. The CEO and Co-Founder Vinny Lingham was raised in South Africa and has always been passionate about democracy. This passion project soon grew into a global effort to provide online users with a way to establish who they are to businesses without making their private details public.

Civic employs a two-factor authentication system to verify an individual’s identity on the app.

Today, Civic’s close-knit team works hard to protect the private information of citizens around the world. Civic is a global operation with 50+ team members in the U.S., Brazil, Latvia, Germany, and South Africa.

Chris joined the team in 2018 and has used his advertising background to raise the company’s profile and advocate on behalf of consumer privacy.

“Everyone should have control, safety, and security around their identities. Identity is what really makes a human. It’s how we interact. It’s how we pay for things. It’s everything, right?” Chris said, “But there clearly is a challenge in the way identity is being addressed right now in the digital space, and we’re working on a solution that can fix that.”

Civic’s decentralized platform means that Civic never stores user information, so there isn’t a single, vulnerable database. The tech-savvy team realizes that these large databases can become a target for hackers, so the Civic App uses each individual’s smartphone to hold his or her personal information.

“We’re not storing your info, my info, and everyone’s info in one database,” Chris explained. “We’re really relying on the consumer’s smartphone to essentially decide what information they are sharing. The whole idea around what we’re trying to accomplish is to give the everyday consumer a way to manage and control their digital identity.”

A Secure Login Service Can Build Trust in Online Services

Civic’s secure login service is the main draw for consumers who are tired of forgetting their passwords. A lot of people give up on coming up with original passwords for every email address, social media account, dating site, and other platforms they join, so they use the same password on multiple websites and make themselves vulnerable to hackers. If someone steals one password, they can access your entire life online.

Civic users can set up a Civic ID which allows them to verify their identities and automatically register and log into sites and apps that use Civic’s Secure ID Platform. Apps and websites can use a unique QR Code that their users can scan to create an account or log in. If dating websites adopted Civic, it would enable users to quickly and securely create dating profiles on multiple sites and apps.

When a user downloads the Civic App, his or her identity is validated. They can share that digital identity on demand to create accounts or log into website that use Civic’s platform.

“Ensuring who you are and sharing that information with businesses you trust is very important. At the core, we’re really focused on helping people have control of their digital identity around the world,” Chris said. “That’s the long-term vision. We have multiple products to help them do that.

How Dating Sites Can Create a Safe Space for Sharing Information

One of Civic’s primary appeals to businesses is ID Codes, which can help businesses verify and understand who their customers are. Civic’s curated verification system allows companies to validate anonymous profiles or accounts by cross-matching with a submitted driver’s license or passport photo. The system uses biometric data to identify online users, and that builds a sense of trust and transparency between businesses and consumers.

Thanks to Civic, businesses can have the security of knowing that a person is who they say they are. That can be helpful for therapists working with online patients, matchmakers recruiting online date prospects, and online dating companies maintaining vast databases of singles on the web.

“There are a lot of opportunities for us in the dating space,” Chris said, “and we’re starting to have high-level discussions with some of the bigger technology companies focused on privacy concerns.”

Civic can help dating companies of all sizes verify their users’ identities and ensure that everyone is accurately representing themselves on the site. This is important because it can severely hurt a dating site’s reputation if users feel a lot of its profiles are fake, inactive, or misleading.

Thanks to Civic, dating sites can validate the identities of its customers and remove fraudulent accounts based on biometric data.

“Civic can definitely benefit people in the dating world because there’s just so much fakeness going on in there,” Chris concluded, “and users want to make sure they’re talking to someone real.”

Civic Aims to Solve the Online Privacy Crisis Around the World

Maintaining privacy in an ever-connected digital world is a tall order, but Civic is committed to helping the average user take control of their digital futures. Whether they’re signing up for a dating site or filing a credit report, consumers have a right to protect their personal privacy and take precautions to ensure their user profiles, credit card numbers, and other sensitive information remains between them and a company they trust.

Singles and dating companies alike can use Civic to add a layer of security to the online dating experience. Civic’s identity verification tools can ensure online daters won’t fall victim to a massive data breach like the one that impacted Ashley Madison’s users.

As more online data breaches and hacking exploits make headlines, more people are taking notice of this privacy issue and are starting to demand greater security measures to protect themselves from online lawbreakers. Civic has stepped up to the plate to provide those security measures and build a brighter future.

“We’re really focused on helping consumers protect their identities and making it easy for them to stay safe online,” Chris said. “We have to be able to educate both businesses and consumers on the value Civic offers in terms of privacy and security.”