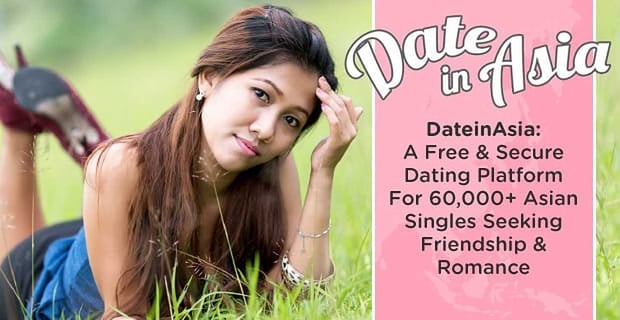 The Short Version: Finding a particular type of person on a mainstream dating platform can take multiple searches and considerable time. Niche dating websites save you the hassle of combing through general profiles by allowing singles to go after what they want in a targeted dating environment. On a niche dating site, like DateInAsia, you’re surrounded by people who are your type and looking for someone like you. If you’re into Asian singles, DateInAsia supplies a global dating pool of available and attractive men and women. The dating platform has over 60,000 members screened and approved by a real person on the two-person team. On DateInAsia, singles worldwide can flirt with one another and build lasting relationships in a user-friendly dating environment.

On Christmas Day in 2011, Robert M. got an idea. What if there were an easy and affordable way to meet Filipino women online? He imagined a free niche dating site for Asian women attracted to foreign men (and vice versa). A place where singles like himself could find that special someone in another country. He decided to create a platform where singles all over the world could mix and mingle without monthly subscriptions or hidden fees.

The next day, he got to work. He began building the site that would become DateInAsia because he felt passionately about helping women in the Philippines connect with men all around the world.

“It was more of a hobby for me at first, but then, as time went on, I started to see the real difference that I was making,” he said. “So I decided to put more effort into it.”

From the outset, Robert was adamant that the niche dating site follow two core principles: 1) Remain always free and 2) Never automatically ban or block users. It takes considerable effort to run a dating site that way, but Robert took on the challenge.

Today, DateInAsia supports over 60,000 real men and women in search of friendship, love, and marriage. Anyone seeking an Asian partner can sign up for free and start browsing members around the world. The website’s intuitive design and straightforward features help daters introduce themselves to one another in a low-key environment.

After six years of promoting, monitoring, and expanding the niche dating site, Robert told us he is satisfied with DateInAsia’s progress thus far. In the coming years, he hopes to build on the site’s successes and make Asian dating easier for singles around the world.

“The first few years were tough — especially because I did not want to cut corners and cheat by adding fake profiles,” he recalled. “The first three years were a learning curve, whereas in the last three years, I have had more direction with where I am going with this website.”

You can create a free account on DateInAsia in a few minutes. You’ll need to enter a valid email address and phone number for authentication purposes. In the Profile Headline and Profile Description sections, you can describe who you are and what you’re looking for in a partner in your own words. In the gender category, you can select male, female, or ladyboy. You can add up to two pictures on your profile as well. If you sign up through Facebook, you can skip all the forms and let the site automatically fill in your personal details.

“The biggest hurdle of all was identifying and stopping scammers from joining the website and taking advantage of other members,” Robert said.

Signing up to DateInAsia takes only a few minutes and is 100% free.

To deter people from creating false profiles on DateInAsia, Robert implemented a unique phone verification system. All new members must submit a valid phone number (mobile or landline) to prove they are a real person. The phone number can only be used once, which limits a person’s ability to create multiple false profiles. This system has been a great help in moderating the site.

The DateInAsia team uses phone numbers for verification purposes only. Robert promised, “We never contact, sell, or use people’s phone number for anything else.”

DateInAsia is a niche dating site with interactive tools to keep daters engaged and safe at the same time. “I offer the ability to rate each member’s profile with a thumbs up or a thumbs down,” Robert explained. “This can give other members a real indication of a profile before they attempt contact or reply to a message.”

Currently, Robert is integrating the rating system in the moderation process so it can be used to flag phony or malicious profiles. His goal is to see to it that any profile reaching a certain number of negative reviews will trigger an automatic review by the moderators.

On DateInAsia, members can choose to block someone who’s bothering them or report any abusive or inappropriate behavior. All member reports will be carefully reviewed by a real person. The platform can ban members, but singles still need to take precautions and use good judgment online. The team at DateInAsia strongly discourages users from sending money to someone on the site, especially if you’ve never met in person.

Currently, DateInAsia boasts a diverse membership of over 60,000 users. The gender breakdown is roughly equal between men and women, with slightly more women than men signed up. According to Robert, over 90% of the women on the site live in the Philippines.

While a majority of users are straight, DateInAsia does open the door to people of all orientations. Around 1,000 members identify as ladyboys on the site. The dating site’s welcoming atmosphere helps to grow the membership in the long run.

Slightly more than half the users on DateInAsia are Asian women seeking a date.

Robert made a point to mention that his free site makes international dating more affordable for Asian singles on a tight budget. He understands that his target market in the Philippines often can’t afford a $30 subscription fee — because that could be a whole week’s wages for some people.

“Asian singles need their own website, and it must be free,” Robert told us. “I have kept my website 100% free to use.”

Currently, DateInAsia is run by a two-person team. Robert moderates the site and answers customer support requests himself while a part-time developer named Vikas helps him with technical issues. He also occasionally hires contractors to complete small projects, but, on the whole, he keeps DateInAsia operational through his own hard work.

Keeping the website absolutely free for everyone involves some careful budgeting, but the success stories make it all worth it to Robert. He told us he has received a lot of positive feedback from couples who met on the website. The happily paired people usually ask to have their profiles removed from DateInAsia and thank the team for bringing them together.

One member with the username Dano said he met a special lady on DateInAsia after nearly giving up a few times. “I feel really comfortable with her, so there’s a good chance this will have a happy ending,” he wrote in a discussion forum. “She really warmed up to me this week, so much so, my computer is now overheating.”

“I did meet a Filipina who’s special to me on DIA… she’s much more mature and sincere than most of the women I chatted with.” — Dano, a satisfied user on DateInAsia

“The biggest thing for me,” Robert said, “was recently helping a couple out with United States visa requirements.”

An American man fell in love with a girl from the Philippines on DateInAsia. They soon got married and needed help with the visa application. Robert gladly assisted the newlyweds with the paperwork so they could stay together.

Robert told us his own partner is from the Philippines, so it brings him a lot of satisfaction to help others find the happiness he enjoys in his love life.

DateInAsia — Where Singles Can Mingle Freely

Since launching in 2011, DateInAsia has made a name for itself as an authentic and free niche dating site. Thousands of Asian daters have joined in search of a date in their area or around the world. From the simple ratings system to the thorough phone verification system, the Asian dating site has a variety of unique features to help you make a friend, plan a date, and build a long-term relationship online.

In addition to working a full-time job, Robert puts a lot of effort into moderating and maintaining DateInAsia. He looks after the website in his spare time and hopes to develop it further in the years to come. Robert said he always considers the site incomplete because there’s always something he can do to improve it and make it easier for people to connect using the platform.

The development team’s current project is to make the site more efficient and mobile-friendly.

“Right now, more than anything, I am focused on taking feedback from members on what they would like to see,” Robert explained. “The input I get from users of the website heavily influences the future development of DateInAsia.”