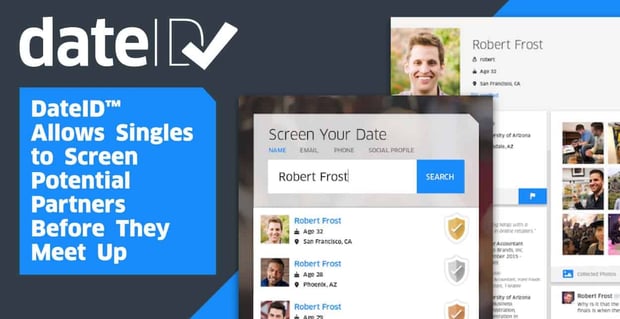 DateID™ Allows Singles to Screen Potential Partners Before They Meet Up

The Short Version: Catfishing and inaccurate profile information can cause serious problems for online daters, which is why Remy Tennant built DateID as a solution. DateID is a background search tool that allows singles to research potential partners, whether it’s before a first date or when things start to get serious. The platform unearths plenty of useful information from a variety of trusted online sources, including public records, social media, and the sex offender registry. DateID helps singles rest assured that their dates are authentic, so they don’t waste their time.

According to a survey conducted by DateID, a platform that verifies the identity of online daters, more than 70% of men and women surveyed believe they’ve seen false information in someone’s dating profile and/or they’ve gone on a date with someone who didn’t look like the photos they posted.

It’s also hard to know exactly how many fake profiles are out there, and catfishing continues to be a problem. Often, a scammer tries to lure someone into a relationship under false pretenses in an attempt to steal their financial information.

Remy Tennant, the Founder of DateID, knows that situation well. He was an early participant in online dating and had a Match.com account around 2003.

While he had some success getting dates in the San Francisco Bay Area, he noticed that the situation changed dramatically with the proliferation of online dating and the advent of mobile dating apps.

DateID allows users to verify the identity and authenticity of matches on dating sites.

“I noticed a change. I felt it was always problematic, and those things worsened,” Remy said. “And, today, there seem to be fewer alternatives to online dating.”

He found himself going on dates with women who lied about their ages or posted photos that were quite outdated. He felt that the more competitive the dating platform was for singles, the more likely it was that people would lie on their profiles.

So, Remy created DateID, a tool that allows singles to find out if online prospects are who they say they are.

The DateID platform offers a service that is much more in-depth than just typing a person’s name into a popular search engine. It also includes more features and sources than many other online background check sites. It even allows users to find more recent photos of potential dates, so they can see if someone has presented themselves accurately.

The Service Can Eliminate Uncertainty and Even Bad Dates

Remy launched DateID recently because he saw that, while almost everyone was trying to screen their dates, there was a lack of research tools that allow people to scan the entire web, not just cursory search engines. DateID gleans information from a variety of sources with one goal in mind: to save people from heartache and pain.

“There’s a heck of a lot of deception going on,” he said. “Bad dates can be really painful. If you throw in not getting what you expect, it makes first dates significantly harder. It was clear the way the marketplace was set up that people were incentivized to be dishonest. If you are, you’re more likely to get that first date.”

DateID Founder Remy Tennant spoke with us about the importance of users verifying their own information through the platform.

Catfishing causes more than just emotional pain; it results in the loss of millions of dollars each year. But if a user runs the person through a DateID search, and they aren’t who they represent themselves to be, they could eliminate that potential for getting scammed — and save money on an unsatisfying date.

Remy said he frequently talks to men who are in denial about the fact that they are actively in the middle of a scam.

“They fall for these fake profiles and they send money. It’s really tragic,” he said. “I’ll send them links to articles explaining the scams, and some remain in denial. Many of the wonderful women they think they are talking to just don’t exist.”

That’s why the DateID platform goes beyond other search tools to find as much information as possible on a potential partner. And if they don’t exist, a user will know pretty quickly.

A few other features set DateID apart from the crowd. First, users can claim their own profile and verify themselves. That can be important because it allows other people who search to have confidence that users are authentic and truthful. Also, they can determine which pictures will display and if they want any personal information excluded.

Another difference is the price. A lot of background check software and platforms are quite expensive. Typically, users need to purchase a monthly subscription, which doesn’t work well for the occasional dater who only needs to search a few people each month. There may be a free trial, but then users may be tied to an auto-renewal policy that can be difficult to cancel.

DateID gathers information from a variety of social media platforms and criminal databases, among other resources.

But DateID costs just $0.99 per screening. The first three screens are free, and it’s also completely free to verify your own information.

“Even if you don’t mind the dating process, everyone cares about their time,” he said. “There is also a tremendous amount of wasted money, and it all adds up. People should be screening their dates until online singles start being a little more honest.”

Personal verification, which is a fairly straightforward process, is optional but encouraged. Users can create an account with their Facebook page and verify their location, which the system matches to their computer’s IP address. After they verify their identity and age, and update their photo, they earn a verification badge for their profile.

Remy said he is working with an associate, Erika, who is also a co-founder and an avid online dater. Together, they address feedback from users to help streamline the process and make the platform even more user-friendly.

He added that everyone who works on the site has experience with online dating.

DateID helps users find out if other daters are genuine while allowing them to verify their own authenticity. That is especially important because it is what all singles will soon be looking for, Remy said.

“I’m not a dating coach, but I encourage people to be proactive and take control and strategize to make the most of online dating,” he said. “If you don’t put in the effort, the success rates will be lower.”

Users can quickly search their love interests through the site, which combs social media accounts, search engines, the sex offender registry, and other databases for information. And all searches are private and confidential.

Remy aims to inspire others to start implementing a “No ID, no date” rule for themselves as a means of protection from catfishing and dishonesty. Already, he’s seeing that a lot of men are interested in signing up and earning the DateID verification shield on their account. Women are getting verified, too.

In the end, Remy hopes more of the nearly 60 million online daters throughout the world will use DateID tools to feel more at ease when meeting someone for the first time. With thousands of users already on the platform just a few months into launch, he’s off to a strong start.

“Hopefully, the good, honest people will find each other,” he said. “I would have way more confidence if I met someone who went through the DateID verification process.”