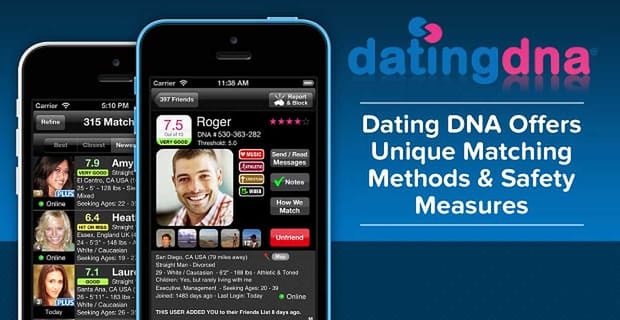 The Short Version: To create a better match, Dating DNA provides compatibility scores that help users gauge the likelihood of potential matches being a good fit. Compatibility is compiled using each member’s unique 9-digit code, like DNA, based on responses to an extensive sign-up survey. Users can even set a compatibility threshold and lock out users who don’t make the cut as an added level of security. And Dating DNA has been doing all of that for free on Apple devices since 2008.

In January 2007, Steve Jobs took the stage at the Moscone Center in San Francisco and introduced the world to the first iPhone saying, “Today, Apple is going to reinvent the phone.”

Six months later, the first iPhone was released and its unique touch interface and full web browser became the new standard for how users would interact with mobile devices. After much outcry, the App Store landed a year later as an easy solution for users to browse and install non-native applications on their iPhones. The App Store also finally enabled third-party apps to be developed for the iPhone and provided a centralized way to search for and download these apps.

When Kevin Carmony heard about the iPhone and App Store, his mind raced with the possibilities of developing an app for the 75% of adults who owned a cell phone at that time. He set his sights on creating something unique to supplement the growing world of digitized dating, and Dating DNA was released in iTunes as the original free, full-featured dating app in the store.

In addition to being completely free to use, the app boasted unique features, including its proprietary Dating DNA Number that ranks compatibility between users and serves as a unique identifier like actual DNA sequencing.

Kevin and his team of volunteers have since expanded the app to include a website for users to better flesh out their profiles online. He has also developed similar offerings in Friends DNA and Networking DNA for users to meet new people based on the role they’ll fill in the user’s life.

Now, almost a decade later, Dating DNA is holding its own in the App Store right below Coffee Meets Bagel in the dating category.

Too often, dating services and apps charge subscriptions or extra fees to access full-featured versions, leaving free users unable to truly engage. While Kevin saw a need to provide a free dating app for the iPhone, he also wanted it to be a better tool for people to meet other sincere singles looking for love.

To ensure people using his app were genuinely interested in dating (and not just spammers or scammers), he included several guidelines as part of the user agreement — like making sure user photos are G-rated and include a clear headshot, answering a detailed questionnaire, and locking out users from viewing and interacting with others who aren’t compatible enough.

The Dating DNA Number was created to manage user interaction as a safety measure and to provide better matching. A 9-digit number is assigned to you based on your responses to a survey of 300 topics, from what you’re looking for to your personal tastes. Then the Dating DNA service analyzes your number compared with another user’s, and its proprietary matching system tells you how compatible you might be with that person.

Dating DNA app screenshots from left: the emails and message logs screen, the dating potential (aka compatibility) score explained, and a detailed view of a profile.

As another layer of added security, each user sets a threshold for the compatibility rating that they’re interested in interacting with (basically how selective you want to be), which ranges from zero to 10 and includes decimals. If a user isn’t within your threshold, you can lock them out from viewing your profile.

Zero-Tolerance for Those Disrupting the Dating DNA Community

One of the most important aspects in creating Dating DNA was making sure its users felt safe on the app and website. Kevin and his team employ several strict policies regarding photos on the site and overzealous email blasts.

Ensuring everything across the app and website is “G-Rated” means there is nothing to attract creeps and nowhere for them to hide. Dating DNA is geared toward “sincere singles,” as Kevin describes his ideal user base, and anyone who doesn’t fit that description is likely going to have their profile removed.

If any user is reported enough times by the rest of the community, their account is immediately deleted. Because Dating DNA is free, there is no need to go through the investigation process many paid sites are required to do before removing someone from the community. This keeps the site attractive to those who are really trying to find a match.

The Dating DNA Process: How to Make the Most of Your Experience

Users can access Dating DNA on their phones via the app or on the website. When you sign up, you’re taken through the survey and prompts you to add photos (you can even add videos).

If you want to be less selective, then you can answer the survey questions more generally, weigh the questions properly for your goal, and set a lower compatibility threshold. However, if you want to find people who you think have a better chance of meeting your high standards, be very specific in answering the survey, weigh the questions that matter the most higher, and then set a compatibility threshold between 7.0 and 10.0 (good to excellent match).

After you complete your profile, you can begin to browse for new people. There are several ways to find your next mate, including sorting by compatibility score, last login date, the date they joined, and by location. You can even further fine-tune the results returned from your search to zero in on aspects like age or a finer location radius based on a map.

When you come across a match you wish to communicate with, you can add them to your “friends list,” which serves as a little black book of records. There you will be able to keep track of details (such as additional images, notes, and contact information) in the notes section, only visible to you. You can even rate your friends, which again will only be visible to you but enables another sorting method.

Dating DNA’s standing among dating apps remains pretty solid, and in fact it’s rated 4 out of 5 stars for its most recent version in the App Store. Kevin’s team at Life’s DNA, the company behind all the DNA brands, also offers a paid version of the Dating DNA app for a one-time purchase price of $4.99.

Kevin describes the goal as helping users save time, money, and energy by focusing on only people who meet their compatibility threshold, which indicates a higher probability of getting along with someone on a first date and beyond.

For now, he hopes to continue providing safe, free environments for people to meet each other, either romantically, for friendship, or to help with a career move.