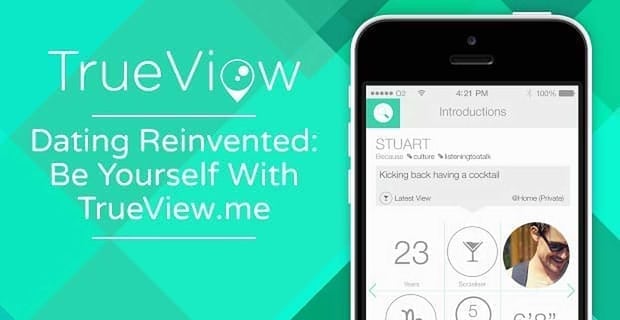 Dating Reinvented: Be Yourself With TrueView

TL;DR: Launched in 2012, TrueView.me focuses on one thing and does that one thing extremely well, and that’s connecting people through the things they love doing.

Don’t you hate it when you meet someone who you think could be “the one,” only to find out they don’t share your love of mac and cheese or “Breaking Bad”? The word deal-breaker comes to mind.

But with Trueview, an innovative (and free!) dating app that puts common interests first, you’ll never have to worry about that again.

After growing tired of wasting time and money on dating sites that weren’t producing quality matches, Andrew Ibboston, TrueView co-founder and CEO, saw an opportunity to create a service that’s more in tune with the way people meet via their smartphones and social media profiles.

“Ultimately our aim has always been to give people a better experience online so that they have a better offline experience,” Ibboston said. “We want to start great conversations online, making it much easier when people go on that first date.”

The face and features behind TrueView

Behind every great CEO is a great team, and that holds true for TrueView.

Ibbotson co-founded the company with design/creative maestro Matt Verity, who he’s been friends with for 20 years, and tech ninja Damian Mitchell, who’s worked with Verity for 10 years. Six more employees round out the tight-knit crew.

According to Ibbotson, working with friends and in such a small group also promotes a more collaborative and fun work space, which includes an outdoor area with a barbecue where everyone eats lunch together.

“We work hard but enjoy socializing together, too,” he said. “We try to create a friendly atmosphere, with flexible working and monthly social events.”

But it’s not just the company culture that TrueView got right. It’s also the platform and features.

By posting short status-style updates of their everyday lives, whether it’s the latest Netflix binge or Pinterest-inspired home-cooked meal, users are able to build a profile that truly reflects their likes and hobbies.

TrueView then uses that information to recommend people based on shared interests, affinity and the likelihood of those matches having a great conversation. Some other cool features include live chat, the ability to post unlimited pictures and more.

The platform also is easily accessible to several different demographics, with a typical TrueView user being a 28- to 35-year-old city dweller who wants a meaningful connection.

“With so many people used to sharing their lives through social media, using TrueView is simple,” Ibbotson said. “We’re continuing to build and test features that add value and give people a great experience. We’re striving to create a better online experience for a better offline relationships.”

With weekly success stories and being named “Newcomer App of the Year” at the 2014 U.K. Dating Awards, 2015 looks to be promising for TrueView.

But what’s truly helped the app become a leader in the space is that the team cares about listening to its audience and using that feedback to improve the service.

“It’s been a great couple of years for the whole team, and we can’t wait to show off what we’re building right now, which will be launched over the next few months,” Ibbotson said. “The team is focused on building a platform and community that introduces like-minded singles that goes beyond dating and can connect people socially across a variety of different verticals.”

TrueView is available in the U.K. via the App Store and Google Play. The team hopes to bring the service to the U.S. and several other countries soon. Visit TrueView.me for more information. You won’t regret it!