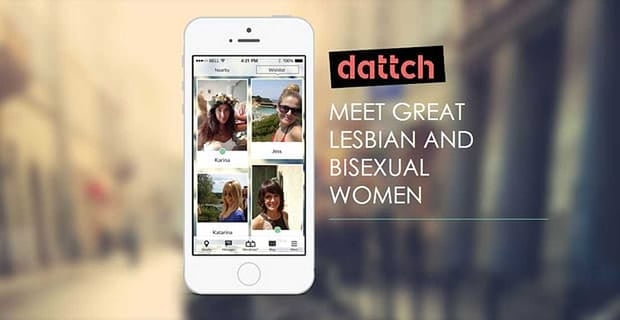 TL;DR: In the world of lesbian dating, Dattch is in a class of its own. Unlike other services that are just clones of the gay ones, Dattch is doing something incredibly unique – actually putting women’s needs first, making it the leading, and most reliable, lesbian app in the industry.

Would you use a dating service that asked “How much body hair do you have?” Neither would Robyn Exton, the founder of Dattch.

After years of using dating apps and sites that clearly didn’t have a clue about how to appeal to women, Exton realized it was time for a change. And that’s how Dattch was born.

With a sleek interface, unlimited messaging and an active blog (not to mention it’s free!), Dattch is the go-to dating app for lesbian, bisexual and bicurious women.

Giving women a way to date how they want

Let’s face it – men and women date differently. Exton knows that, so she wanted to create an app that allowed women to date how they want to date. And who better to do that than a team of intelligent women?

Exton said while most men prefer location-based dating apps that show the best matches within a certain mile radius, Dattch matches women based on their interests and through fun, exclusive features like the “Would You Rather?” game.

Robyn Exton, the founder of Dattch.

“It’s about understanding how women behave and building features that give them the value they’re looking for,” she said. “It’s about helping women meet other women and they describe what the outcome will be, whether it’s a friendship, whether it’s love, whether it’s one date and I’ll never see you again.”

Dattch’s interface also stands out from the rest.

A mash-up of Pinterest and Instagram, or “Pinstagram” as Exton calls it, members can post pictures of things like their latest vacation or what they’re having for lunch instead of writing a long-winded profile, allowing the photos to speak for the user.

Exton said since most of Dattch’s users have three to four conversations before meeting up, the Pinstagram layout naturally creates great opening lines for those who don’t have the writing style of Nora Roberts.

“We thought the best way for women to express who they are is by sharing images,” she said. “I can learn more from someone’s Instagram account about who they are than I can reading some really long text description that no one likes writing and doesn’t accurately say who they are at all.”

Adding value to the lesbian community

Dattch is doing more than just creating matches – it’s contributing something beneficial to the lesbian community as a whole, which includes a safe environment for women to interact.

While fake accounts abound on other lesbian dating sites, Dattch verifies the gender of its users before they are given access. Exton and her team have about five different measures they take, including using Facebook and Skype, to make sure men aren’t creating bogus profiles just to meet women.

Dattch uses Facebook and Skype to confirm the gender of its users.

All of this leads to the end product you see now – an effective dating site built by a team that cares about giving its members the experience they want.

“Lesbian women are just like any other person in that they’re looking for someone to meet,” Exton said. “What’s unique to our community is there’s a social level that a lot of women are looking for. A lot of them are looking to make friends and meet other women in the community, and that’s the value we can add as well.”

It’s only up from here

While Dattch, which is available on iOS and Android, is based in the U.K., it’s also available in major U.S. cities like New York and San Francisco, with more cities (and countries!) coming soon.

Exton said they’ve seen great success in the U.S. (as much as 30 percent growth each month) and American women are appreciative to have a dating service that is truly made for them.

“I think people can really feel the difference strongly about not just the aesthetic, but how it feels like a product built for women,” she said.

And if the app isn’t available in your area yet, Exton said you can still be active in the Dattch community through the blog, which includes articles about pop culture, LGBT news and even sex toy reviews, or events like Stitch and Bitch, where Dattch employees and users knit, have a few drinks and vent about their problems that day.

“The real joy people get from the app is meeting each other… but at the same time, we have an opinion and a stance and a belief in the world, and we want people to see that and to know we want to provide extra value to them besides just meeting each other,” she said.