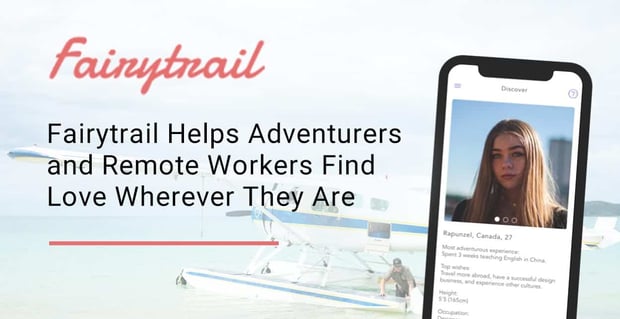 Fairytrail Helps Adventurers and Remote Workers Find Love Wherever They Are

The Short Version: Single world travelers, digital nomads, and remote workers often discover that many singles they meet along the way aren’t interested in dating. The Fairytrail dating app is on a mission to connect people based on their interests and personalities, not on their location. Fairytrail allows users to create virtual dates through the app and get to know others whose paths they may have never crossed.

Two decades ago, it would have been hard to imagine someone who worked remotely full time. Back then, only a lucky few could travel wherever they wanted, live nomadically, and work — sometimes without a home base at all.

Of course, remote work is now increasingly common thanks to the power of the internet and the job flexibility of certain professions, including online marketing, developers, writers, designers, and customer support, just to name a few.

According to Flexjobs.com, 3.9 million Americans worked remotely in 2015. That number increased to 4.7 million people in early 2020. But during the global COVID-19 pandemic, millions more began working remotely thanks to video conferencing technology and systems that increased both productivity and freedom.

But the rise of that digital freedom can also have some unintended consequences in the social world.

That’s why Taige Zhang created Fairytrail, a dating app designed to connect remote workers and adventurers based on their personalities and values — not on their geographic locations.

Fairytrail allows adventurers and remote workers to connect around the world.

Thanks to the availability of remote work and low-cost travel, more young people can live wherever they wish. But without the familiarity of home or strong social networks in new cities they relocate to, travelers may start to feel isolated and lonely.

Taige understood that with travel and remote work, it’s not always easy to find someone to get to know — either as friends or something more.

“Fairytrail was founded on the belief that the world’s cultures, people, and places should be explored. It’s a dating app made for explorers, remote workers, freelancers, expats, nomads, and travelers,” Taige said.

Connects Members Around the World

It doesn’t matter where Fairytrail members are located, because the people who enjoy the app can — or want to — travel wherever they wish. That differentiates the platform from most traditional dating apps, which rely heavily on location-based matching. Instead of searching a small region on Fairytrail, users can find love and companionship on a global scale.

“Many explorers don’t have a fixed location and are open to dating in other locations,” Taige said. “Fairytrail’s mission is to make dating more convenient, efficient, and fun. Hopefully, in the process, we will make the world more interconnected and empathetic.”

Taige understands that mission well. He considers himself a world explorer and has lived in five countries while working for startups and large companies. When he realized the growing need for a service to connect people like himself, he pulled in a team of remote workers who were optimistic, curious, creative, and determined.

Approximately 93% of Fairytrail users are remote workers — or they aspire to be. The majority (58%) are women, and 84% are heterosexual. As do single travelers in general, its user base skews young, and its primary demographic is 25 to 29 years old.

Most users are based in the U.S., and it also has many members in the U.K., Australia, and Canada. The platform welcomes people of all nationalities, age groups, and sexual preferences.

Fairytrail also has a small membership fee, which is essential because it effectively keeps out scammers that tend to pop up on many free dating sites and apps.

Users Can Customize Their Profile with a Personalized Character

Fairytrail isn’t a typical swipe-left-or-right kind of app. In fact, users don’t even include a photo in their profiles.

After they download the app — available on iOS and Android — users complete their profile with basic information, including their age, height, occupation, and nationality. From there, they can add anything they’d like about their passions, values, and hobbies. Then, users select an archetypal Fairytrail character that correlates to one of the Myers-Briggs test’s 16 personality types.

Looking for specific physical characteristics without considering someone’s personality is a common mistake people make in online dating. Fairytrail makes personality a central theme in its profiles and encourages users to look past appearance and instead consider how the person feels about cultures, languages, and values.

The Fairytrail app allows users to connect, talk, and even take virtual tours together.

“We are most proud of our ability to playfully integrate psychology into our app,” Taige said. “It makes the whole experience lighthearted yet scientifically rich.”

Once users select a character, the fun begins. They start matching with interesting people and can consider both virtual and in-person meetings. On the virtual side, the app allows users to talk and video chat with one another.

The app also allows users to run identity and background checks for an added fee.

“It’s easy to operate, yet has great emotional depth. It’s not a platform made for half-hearted swipes, but rather to cultivate meaningful relationships and experiences,” Taige said.

That’s perfect for highly mobile people, including world citizens, expats, and frequent travelers. It can also benefit flight attendants, freelancers, and gig workers such as Uber or Lyft drivers.

Fairytrail: Virtual Experiences Make It Fun to Date From Anywhere

Travel can be more fun when you do it with a special someone — even if it is virtual. And that’s the next scenario Fairytrail plans to tackle. The platform aims to offer virtual adventures for people who meet through the app.

Those experiences could include a virtual tour of Paris with a local guide, a stroll through antique shops in Tel Aviv, or learning to prepare recipes from a Moroccan family.

Fairytrail users can meet up at plenty of worldwide destinations, including romantic cities in Italy. (Photo Courtesy of Fairytrail and Grace Chen)

“Loving, supportive relationships are among the most important things in life, especially given the isolation and loneliness that can come with remote work,” Taige said. “We want to help our users develop relationships and have social experiences.”

The community of travelers and remote workers has expressed its love for the platform.

“What’s really exciting to me is that you’re much more likely to meet someone who shares a passion for travel on Fairytrail,” said Dann of The Dreampacker.

Ksenia, the CMO of 6nomads, added that the app “solves a huge problem in dating.”

As the number of digital workers steadily grows, so do Fairytrail’s plans for the future. Taige said the company has recently launched Campfire, a non-dating community. It’s designed to help people share their interests, personal goals, and support one another through the process.

“Fairytrail will continue to focus on creating a dating experience for people who prioritize their partner over their location,” Taige said. “We’re here to serve the remote worker community when it comes to dating and relationships.”