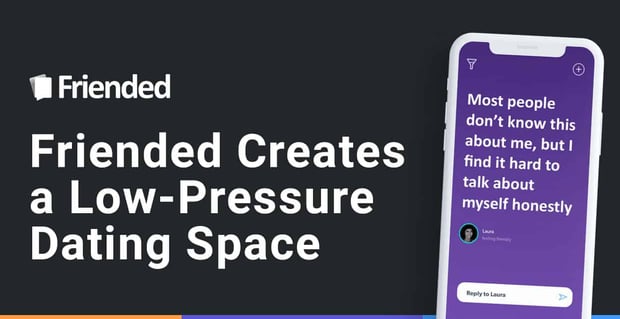 The Short Version: Introverted and shy individuals may find themselves struggling with dating or meeting new friends. With the help from the dating app Friended, anyone can find companionship in their own time on their own terms. The Friended app proves that there is always someone to talk to on the other end, you just have to say hi.

Some individuals can walk into a room and charm just about anyone with their words. You have one conversation with them and you’ll find yourself planning out the rest of your lives together by the end of the night.

Being a social butterfly definitely has its perks. Some would even say that extroverts are God’s favorite. They win at finding new relationships just about every time, and it makes you want to win at relationships too. Often overlooked, however, are the individuals (like myself) who aren’t that socially gifted. Do we just give up dating altogether because sending one “Hey big head” text message feels a little too much? Of course not!

With new dating apps like Friended, people from all around the globe have the chance to connect and build authentic relationships with little to no pressure.

When asked what was the mission and founding story of Friended, Community Manager Miranda Bonamo said, “Our mission is to cultivate an environment that is productive and supportive where you can always find someone to talk to.”

According to the app, 67% of people surveyed said they feel more confident after using Friended. The app essentially makes it easy for users to find their voice and meet new people.

“Our founding story is a personal one that many people relate to,” Miranda added. “For those of us who grew up shy and maybe a little introverted, it may have been hard to make friends or hard to open up to the friends you do have.”

We’ve heard of the phrase love at first sight, but on Friended many users find themselves caught up in love at first talk. Whether it’s falling in love with your soulmate or making a new friend, Friended was designed for users to indulge in good conversations that lead to long-lasting relationships.

With a focus on “always someone to talk to,” Friended users gain experience by using cool features that help them start conversations with people they want to connect with – which they may have never done before.

An anonymous user wrote, “I’ve met three new good friends on this app, and it has gotten me out of my comfort zone. I’ve never saw myself on an app like this to look for new people to talk to, and I’ve met so many amazing people that I have stuff in common with.”

One major reason why people struggle with making new friends or finding a potential lover is because they don’t know how to start a conversation.

Choosing the right approach or even the right words may create a lot of pressure that some may not find worth trying. Do you send a risky text message or do you simply just say hi? There is really no right or wrong answer here.

Friended makes starting a conversation simple. Users have an array of options: They can boldly video chat one another or play it cool and start off slow by playing mini-games to get to know one another.

Whatever floats your boat, know that you’re in control. The sweet part of it all is that users determine how long the conversations last and the next steps they want to take. Friended never tries to define the type of relationships you build.

Not all the people you meet on Friended will result in a long-lasting relationship, but it’ll be rewarding to know that you had that experience. “Even talking to some people for a brief moment is really inspiring,” an anonymous user said in a review.

Finding Connections From All Across the Globe

It’s not as easy these days to meet and talk to new people with COVID roaming around. Our social lives are hurting, and it’s because we’re finding ourselves confined to just four walls.

But before you start thinking about talking back to that wall (because, trust me, I’ve thought about it too), find comfort in knowing that dating apps like Friended exist and are effective in connecting people.

Despite the distance, Friended ensures that users can still feel connected to the outside world without having to actually be outside.

“Friended has a very diverse user base with people from all walks of life who are between the ages of 24 and 36. It’s the generation that grew up with the internet and the online communities that were prevalent in the early 2000s, communities where it was commonplace to share parts of your life with strangers who lived in other places,” Miranda said.

Your new friend or lover may not be down the street but they’re always a video chat or text message away.

Nowadays new bonds are created and it doesn’t have to be in person, something we probably could have never imagined a decade ago. Singles can still find the love of their lives with a click of a button and friends can still be made without having to physically attend a neighborhood town meeting.

You may not be able to physically hang out just yet but unlike any other dating app, Friended provides one of the best content and features that make you feel right next to one another.

Apart from playing games and creating fun icebreakers, users can enjoy getting to know new people through quizzes and shared interest displayed on their profiles. Within seconds of having an account, people from all over the globe will begin to message you to get connected — it works that fast!

But what if they don’t like me? That question isn’t relevant while using Friended because well… you can just be YOU. Showing off the real you and getting you connected to people like you is one of Friended’s main objectives. There are real people on the site which allows you to be the real version of yourself. There’s no pressure in putting on any other face but yours.

“Everyone is given an equal opportunity to have their posts seen and their voices heard,” Miranda said. Never fear not being seen while using Friended.

“I met my best friend of over a year on Friended. We talk every day, and we help each other grow,” an anonymous user shared in a testimonial. In due time, you too can find yourself just like this user going from playing quizzes and games to talking to someone you connect with every day.

Less pressure equals a more enjoyable experience. You don’t have to be the most vocal or extroverted being in the room to win at making genuine connections. And stepping outside of your comfort zone to make those connections isn’t always required.

Thanks to Friended, shy and introverted individuals can finally participate in the dating pool and put themselves out there to make new friends with nothing but good vibes. The new year is here and, according to Miranda, users can expect new and improved experiences on the app. “That includes more features, new content, and fun games that can connect you with even more people,” she said. Which of course is a win-win for everyone!

Ashayla Blakely is an experienced storyteller and writer who has fun writing authentic and relatable content for DatingAdvice.com. As a hopeless romantic, Ashayla has always enjoyed sharing good conversation and advice about dating. She graduated with a Bachelor's degree in Telecommunications from the University of Florida. You can often catch her with a script in her hand, calling out the shots in her many directorial roles on set.