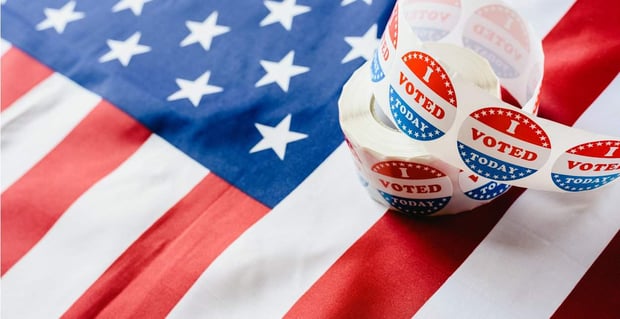 Singles looking for love online are now putting their political affiliation front and center as what feels like the most contentious presidential election of our lifetime lies ahead.

Finding a match now goes beyond zip codes, height, and dietary preferences. If you strongly support the “wrong” candidate or are taking a pass on voting, you’ll decrease your chance of finding a compatible date this election year.

Dating apps have jumped in to help the cause because single daters use apps to prioritize their search parameters and make matching decisions based on political leanings.

If you’ve received a push notification on a dating app recently about politics, you’re not alone. Along with other fields, such as cannabis use and exercise frequency, several dating sites and apps have added new fields and badges to show your affiliation and political preference.

If this worries you that the dating pool has been cut in half, remember that former presidential candidate and South Bend Indiana Mayor, Pete Buttigieg, met his husband on Hinge, so grab your digital seatbelts and get ready to cast your political net.

An OkCupid Study Shows Singles are Attracted to People Who Vote

Singles have habitually scrolled through profiles to check whether potential dates have cats, a college degree, or are divorced instead of separated. Now they’re searching to find out how you feel about families being separated at the border, and which political swag you’re proudly posting.

Registered voters are 85% more likely to receive a message than non-voters, according to data from OkCupid’s 2020 Voting Report, which asked members more than 50 political matching questions. Over half a million singles on the dating app said they won’t date a non-voter, so not being a voter is an instant buzz-kill for online daters.

Using data from how singles answered OkCupid’s 50+ political matching questions, the new 2020 Voting Report shows that registered voters are 85% more likely to receive a message than non-voters. Taking it a step further, over half a million singles on the dating app now say they won’t date a non-voter, so not being a voter is an instant buzz-kill for online daters.

Recent research suggests that most singles are not interested in dating someone who doesn’t vote.

It’s not just politics that’s become a turn-on or a turn-off. The pandemic and social injustice occurring during this pre-election period have magnified this realization for many — forcing the uncomfortable conversation about politics and who you’re voting for to escalate before you even meet your date or schedule a Zoom call.

You may swipe left in a digital heartbeat if you see a profile with someone wearing a MAGA hat. With the George Floyd killing and civil unrest throughout the country, it’s hard not to think or have an opinion about politics.

If someone’s profile mentions their support for Black Lives Matter, you may feel a connection and instant simpatico. If they say they’re apolitical, it will make you wonder what your date stands for in this uncertain time.

On Tinder, where half of its members will be voting in their first presidential election, the team is helping users swipe right to register to vote, and other apps are taking a proactive approach on voting as well.

The simplest way to show you care about politics is to add a voter badge to your profile or use other features dating apps make available to users who want to let other singles know their voting status.

Bumble added an “I am a Voter” badge in 2019 that appears prominently on users’ profiles. On Bumble, you can also answer questions about politics by selecting one of four choices, including apolitical, moderate, liberal, or conservative. Or you can disregard the politics question altogether.

It’s easy to amplify your passion for politics in the essay portion of your profile by adding trending political hashtags such as #voter2020 #bidenharris #democrat #2020election #resist #bluewave #voteblue #VoteBidenHarris2020 #cupofjoe #redwave #trump #maga, or #republican.

In conjunction with its voter 2020 report, OkCupid has also created a Voter 2020 badge, which appears at the top of your profile once you’ve affirmatively answered the question “Are you registered to vote in the 2020 presidential election?”

Already, 98% of OkCupid members say they’re registered to vote. If you answer no to that question, you’ll be redirected to an in-app page where you can register to vote. It’s part of a voter initiative called When We All Vote that OkCupid and Michelle Obama have partnered on.

Approach the Subject of Politics by Being Curious and Asking Questions. Don’t Be Too Judgmental

Now, more than ever, the issues matter, and there’s a lot at stake. From gun control and climate change, to health care and marches, singles want to pair off with someone who is politically aware or has an opinion about more than just what to binge-watch on TV.

My ongoing poll on Love in the Age of Trump shows a similar result. Only 3% of respondents said they aren’t interested in politics, and politics is now a top deal-breaker for singles.

If you’re viewing a profile and read how your date feels politically, it’s easy to click on the “like” or “heart” buttons to show interest without writing a witty introduction message.

The best way to see if someone shares your political views is to ask them questions without being judgmental.

When you see a profile that says, “Swipe left if you’re voting right,” it’s an instant ice-breaker to reach out and say, “Hey, we’re a good match politically. Are you interested in finding out what else we have in common?”

If someone describes themselves as apolitical, but says they’re a voter, it’s not politically or socially incorrect to reach out and ask, “Dare I ask if you’re an undecided voter, or are you waiting to watch the debates to decide on the 2020 election?”

Alternatively, you can ask a potential date, “Are you mailing in your vote or dropping off your ballot?”

If you’re on Hinge, you can finish the sentence on someone’s ice-breaker “Let’s make sure we’re on the same page about…” to include a political comment such as:

Adding your political preferences and not-so-subtle references on your dating profile will result in better matches.

If you’re registered to vote, wear it proudly on your profile because the intersection of politics and dating is more than a fill-in-the-blank entry. Being a voter is the new sexy and the easiest way to fill your date card.