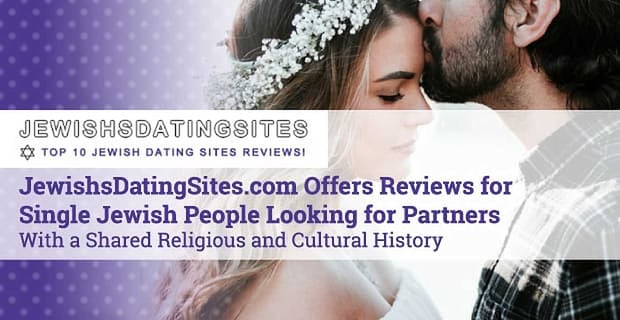 The Short Version: Jewish singles who are looking to date partners of the same religious background often struggle to find suitable mates, especially if they live in cities without large Jewish populations. While many dating sites cater to the masses, only a handful offer services catered to Jewish daters. JewishsDatingSites.com aims to demystify the process of online dating by reviewing and ranking the most promising sites for Jewish singles. Focusing both on dating sites solely for Jewish daters as well as sites with robust features for Jewish singles seeking like-minded partners, JewishsDatingSites.com removes the hassle of finding the best to fit your preferences.

As we know from the Torah, a wedding with two Jewish partners is called a mitzvah. While the mitzvah is technically a commandment from God, most modern Jews think of a partnership of Jews as good luck.

An article in the Harvard Crimson noted: “Many Harvard Jewish students say both dating and marrying within the faith are important to them.” One student even said, “I think that dating within the faith… is a strong value that many Jews have.”

After all, sharing traditions with your partner or spouse is usually a smart practice.

However, while finding a partner who shares their faith is simple for some, it isn’t always easy to meet Jewish partners who meet people’s suitability standards. With a worldwide Jewish population of 15 million — including around 6 million in the United States — the dating pool isn’t as deep. In fact, more than half of American Jews marry people who are not Jewish.

But many Jews say they still long to find partners with religious beliefs similar to their own, especially if they aim to raise their children in the faith. While it can be difficult to find a Jewish partner who also meets your other preferences in a partner, the task isn’t impossible. If you’re intent on meeting someone who shares your dedication to faith, JewishsDatingSites.com can help.

You won’t waste time on sites that don’t fit your needs or your budget. Instead, you can create a profile on one or two sites and then spend most of your time building relationships — rooted in faith — with the right people.

On a Mission to Help Users Find Their Ideal Match

JewishsDatingSites.com evaluated thousands of online dating sites to find the five best for Jewish singles. The top-rated dating site is Jdate.com, a Jewish relationship-exclusive platform that uses an algorithm to match singles based on a series of questions.

Another Jewish-only site reviewed on JewishsDatingSites.com is JPeopleMeet. Though it is the fourth-ranked site, the reviewer praises JPeopleMeet as the best online destination to “find a Jewish single to date without spending a fortune.”

Another platform is Jewish Café, and the review praises its Quick Match functionality, which brings daters a list of users who live in their area, have similar interests, and want the same type of relationship.

JewishsDatingSites.com focuses on every aspect of the dating sites it chooses to review.

Did you know, for example, that popular dating site eHarmony has a niche site designed for Jewish singles? The site is called eHarmony Jewish Dating.

JewishsDatingSites.com notes that the site has an “excellent user base of Jewish singles.”

In particular, the JewishsDatingSites.com reviewer points out the dating engine’s “Get Acquainted” feature, which allows users to respond to five predefined questions to send to potential partners.

Offering In-Depth Reviews of the Most Popular Dating Platforms

JewishsDatingSites.com uses several methods to evaluate sites. First, it considers notable features that the users of each site can deploy. These include the success of the matchmaking algorithm, flirting tools, chat features, and mobile app compatibility.

Next, the reviewer considers if the dating site’s features are worth its price. This section also considers long-term cost.

The site takes cost, features, and membership length into account when doing its ratings.

The reviews help potential users of Jewish Café save money by choosing the optimum pricing tier.

Further, JewishsDatingSites.com lays out the pros and cons of each dating platform. For example, one con of JDate.com is that users can’t send messages without paid subscriptions. Finally, the reviewer sums up the best features of the site in a one- or two-sentence summary.

Ultimately, JewishsDatingSites.com uses these features to rate each platform from zero to 5 stars. In addition to site reviews, the site also considers information useful to daters on its blog.

Recent articles have included “Why It Is A Good Choice To Marry A Jewish Girl?” about the benefits of marrying a Jewish woman and “Before Dating a Jewish Girl, You Should Know These Things.” The articles on the blog offer both a practical and romantic perspective about dating Jewish partners.

The Future: Continue to Make It Easy for Jewish Daters to Connect

For many Jews, it is essential to share their life with someone who also shares their faith.

However, with so many dating sites, it can be a challenge — and a logistical nightmare — to find Jewish singles in cyberspace. And, of course, in addition to faith, there are many factors to consider when choosing a partner — including compatibility, shared interests, and common goals for the future.

Luckily, JewishsDatingSites.com was designed to simplify online dating for Jewish singles. In sum, the site answers the question, “Can I find single Jewish folks to date online?” with a resounding “Yes.” With the best dating sites front and center, you can focus on what really matters: finding your ideal Jewish partner.