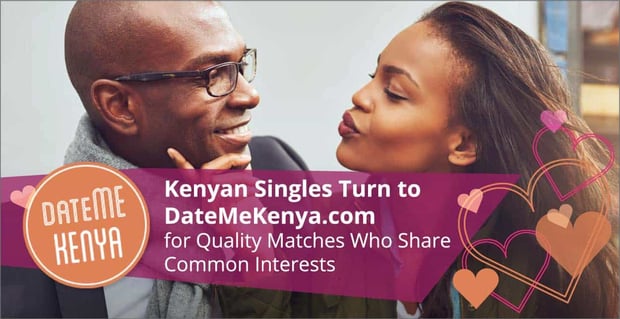 The Short Version: Over the years, Ian Isherwood has seen many of his friends and family members in Kenya struggle to find companionship, dates, and lifelong partners, so he founded DateMeKenya.com to make it easier on them as well as thousands of people throughout the country. Today, the dating site has more than 92,000 members, and Ian individually filters every new member to ensure they are who they say they are.

A few years ago, the Nairobi News Reporter outlined the traits of a modern-day man from Kenya. According to the newspaper, Kenya’s dating scene can be different than the dating scenes in other countries in the world, as it offers a mix of trendy city living and deep traditions.

For example, the reporter said that Kenyan men will never buy flowers for a woman, but they will buy a bottle of alcohol. In addition, even if a woman is casually dating a man, she should expect to cook hot meals for him often. Women should also understand that men in Kenya are quick to couple up, according to the article.

To an outsider, those may seem like strong, traditional beliefs, but the culture is more complex than that. In Kenya, men are allowed by law to take an unlimited number of wives, so long as they’re all over the age of 18. The number of single men and women is relatively small in Kenya, making it tricky to find someone who shares the same values, traditions, styles, and interests. What’s more, sometimes there are scammers who are only looking to make romantic connections for money instead of love.

DateMeKenya has been featured in many media outlets.

That’s why Ian Isherwood created DateMeKenya.com, a dating site that helps Kenyans connect without having to worry about scammers or people who aren’t interested in long-term, meaningful relationships.

“I am Kenyan, actually fourth generation,” Ian said. “I’ve brought the European style of dating into a different culture, which doesn’t always work at the beginning. There’s been a lot of hurdles to jump over. The main focus is that we believe in love. You should love yourself first, figure out what you want, and then join us.”

Ian came up with the idea for DateMeKenya after he had spent time studying and working in the United Kingdom. After 13 years, he had saved up enough money to start a business in Kenya and returned to his home country. At first, he wasn’t sure what he wanted to focus on.

“I looked at goat farming, everything. It was an opportunity to do whatever I wanted. I’d had some experience working on ecommerce sites, so I looked at online dating,” he told us. “No one else was doing it here. I didn’t know much about dating besides my own success and horror stories. It started with helping friends and then expanded from that.”

Currently, Ian does much of the behind-the-scenes work for DateMeKenya, which is exclusive to Kenyan residents.

DateMeKenyas strives to be a safe and fun place for singles to connect.

“We’re only here in Kenya, so we don’t let people join from the outside,” he said. “I want it to have security, and I want people to meet up face to face. I like relationships. I don’t believe in online relationships.”

That’s especially important in a country like Kenya with a growing economy. While some residents live in Nairobi, others still live in rural areas. Ian is adamant that the site is not a place where people can create economic arrangements — it’s simply to help single men and women find love.

“If they want to date someone for the wrong reason, I will reject people,” he said. “We look at all the pictures, confirm, and contact the person. It’s very time-consuming, but so far, we’re picking up on scammers. There is huge potential, but considering what we do, we do it on a very small scale.”

More Than 92,000 Commitment-Minded People Have Joined

Members of DateMeKenya.com are primarily professionals who are in their 30s, 40s, and 50s. Ian said these 92,000 people are hard workers who may be too busy to meet people by going out to clubs or elsewhere around their city.

“We try to focus on relationship-minded people, people who are ready to start relationships and looking for something more meaningful, rather than looking for just a casual thing. Everyone who says casual, we don’t accept them on the site,” he told us. “It’s better to not mix. When we expand, we’ll be able to cater to everyone’s needs.”

It only takes a few steps to create a profile on DateMeKenya.

Once the membership is created, the new member is given a free, limited subscription to look around and see if the site could be useful for them. If so, they can decide whether to purchase a premium or VIP subscription. VIP subscriptions are more expensive because they offer the opportunity to hide photos or profiles in case there’s a concern about privacy.

“Kenya is still relatively conservative, and they still think that everyone is a catfish. When I first started, people were very old-school minded, especially when you hit the 40s and 50s. They are very wary,” Ian said. “They may be high-end professionals and are a little skeptical. But again, I tell them not to do that because you won’t meet people. They want to see what you look like.”

DateMeKenya: On a Mission to Bring Kenyans Together

At first, Ian said he didn’t get much feedback about DateMeKenya, but 13 months after launch, he received an email that touched him deeply.

“We got an email that said, ‘Thank you! We’re getting married.’ I started crying because you’re putting in a lot of hard work, and the feedback was so quiet,” he told us. “In Kenya, people are very quiet and never want to say that they’ve met online. They’re not ashamed, but it’s the culture.”

“Now when I speak to friends who know what I do, they tell me that they have friends who have met on DateMeKenya, and that’s really great,” he continued. “There is still a lot of work to do, but it gives you a little bit of a boost.”

“We got an email that said, ‘Thank you! We’re getting married.’ I started crying because you’re putting in a lot of hard work.” — Ian Isherwood, DateMeKenya Founder

Ian said his reasons for working so hard on DateMeKenya are also personal. He was raised by a single mother of four boys, and he saw how important it was to have a strong relationship because he missed having a father figure.

Meanwhile, Ian has been contemplating offers from investors to expand to other countries throughout Africa. He’s also working to find ways to empower African women in the dating scene.

“We also want to connect our data and help people in rural areas. I’d love to create a dating site with more meaning to it, where more people can say thank you,” he said. “That would be amazing.”