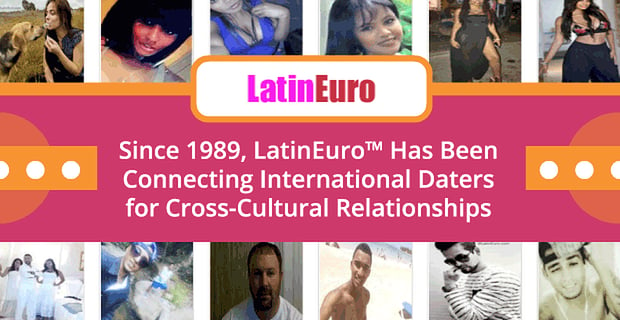 Since 1989, LatinEuro™ Has Been Connecting International Daters for Cross-Cultural Relationships

Short version: According to Founder Bob Funk and Marketing Director Vania Santos, LatinEuro.com has been doing social networking since Facebook Founder Mark Zuckerberg was in kindergarten. The dating site began in 1989 and connects singles with potential partners who are well outside of their social circles. Initially, the company used catalogs that included interested singles’ photographs and short bios, but LatinEuro exploded once it went digital. If daters see an interesting profile, they can pay to connect with that person — either online or over the phone. Nearly 30 years later, LatinEuro is still helping its members remain world citizens.

LatinEuro was a social network long before the internet popularized the term. The original definition of social networking was simply a platform that helped people who couldn’t meet organically to find one another. The site’s Founder, Bob Funk, and Marketing Director, Vania Santos, recall one early member who was especially grateful to meet LatinEuro’s women — via catalog.

“I had a guy working in Barrow, Alaska, for the Geological Survey. We actually had printed catalogs, so we sent him one,” he said. “He thanked us because he was in an isolated place, but now he was chatting with women. He told us we’d given him a lifeline to all these wonderful people.”

That was when Vania recognized his company was performing an important service: helping daters find love.

LatinEuro brings millions of singles together from across the world.

“In the Old Testament, being a matchmaker was one of the best things you could be, higher than a lawyer or doctor,” he said. “Our service can provide love, one of the most important things that will come into a person’s life.”

In the 1980s, well before the dating market was flooded with digital social networks and online dating sites, Vania recognized how difficult it was to meet would-be romantic partners outside of your home country.

“Initially, I was working as an art director at an ad agency in New York,” he said. “It was very hard to meet women in New York City. I went down to Bogota, where it was very easy to meet women. All the women were friendly; they looked you in the eye and smiled. In New York, no one would even look at you. That was the impetus to start LatinEuro.”

The biggest draw of LatinEuro was that it helped American citizens meet daters of different national origins — namely those who lived in Latin American or European countries.

“We started out before computers or mobile devices, so we were way ahead of our time,” Vania said. “The world is full of wonderful people. Why restrict yourself to locals when you have the possibility of meeting somebody outside your realm of experience?”

Though it has become something of a trendy concept, the idea of dating outside of your country of origin was almost entirely foreign to singles when LatinEuro first began.

“We were one of the first dating sites to promote the idea of being a world citizen,” said Vania. “We began using that term in 1990.”

Then and now, daters chose to create a profile on LatinEuro because they wanted to meet partners outside of those they were likely to meet face to face in typical settings. The site has its roots in connecting singles from the US with partners from Latin American countries.

“We’ve fostered thousands of marriages, and, in the ’90s, we were featured on national TV shows when the concept of international dating was a radical one.” — Vania Santos, LatinEuro Marketing Director

“Three decades ago, we began with mostly American men dating women from Latin America,” Vania said. “Now, our membership is 50% black men from the US, Africa, or the Caribbean, then Hispanics. Whites represent 25% of the site.”

As online dating has diversified, then, LatinEuro continues to appeal to daters through its history of success. The website also has a user base reaching back far longer than that of other dating platforms.

“Historically we can study the rise of online dating, how it’s evolved, and how it keeps changing,” said Vania.

Furthermore, while other dating platforms may match international singles, LatinEuro supported cross-border dating long before it was trendy.

“We’ve fostered thousands of marriages, and, in the ’90s, we were featured on national TV shows when the concept of international dating was a radical one,” Vania said.

Vania doesn’t like the way most dating sites match their users and said he thinks tools like matchmaking quizzes are simply gimmicky tools to attract daters.

“I can’t say I approve of questionnaires to find a match. I think that’s a marketing technique,” he said. “They say they have a 10-point system of matching, but that’s just nonsense.”

But he said LatinEuro gives daters what they actually need to make matches based on desire — photos.

“About 95% of people are just looking at photos for matching,” he said. “It’s visuals first, and then give me a list of what you like to do. Our clients want to see pictures then explore all of the other details.”

LatinEuro users often contact each other by phone, which differentiates it from other sites.

“If someone orders from us, they can get the phone number of another client, call them and say, ‘Hi,’” Vania said. “It’s about one person chatting with another. Voices bridge the distance gap, and it makes for a more intimate start to a relationship.”

Vania believes this human element of LatinEuro — calling potential partners on the phone — is what sets the platform apart. While the platform has digitally evolved since 1989, it has held on to the personal communication aspect.

“Dating is, essentially, a human-to-human process. If a customer can call and speak to another human, then I think that’s a good thing,” he said.

Another element of many online dating platforms that puzzles Vania is the idea that daters are seeking a partner who is like them. Vania said the last thing most singles want is someone so similar that they will be bored in a relationship. Instead, he suggests dating someone from another culture to keep a marriage or partnership endlessly intriguing.

“Love, dating, and marriage are about mystery and discovery,” he said. “If you engage with someone international, you have things to discover. There’s a sense of cultural enrichment.”

Though daters have more options to meet partners in 2018 than they did in 1989, LatinEuro continues to attract contemporary daters. The company may also soon expand into another burgeoning market.

“We find that, for most men, it’s very hard to get a date,” said Vania. “So some of the bigger sugar daddy sites are starting to emulate LatinEuro in that they’re getting women from other countries to be sugar babies. We’re looking at potentially opening up a sugar daddy site in the future because that’s where the demand is.”

Even if LatinEuro enters a new market, the platform will stay committed to its mission of connecting international daters, and the stories of those successful daters will continue to drive Vania and the team to keep improving the service.

“One guy wanted to get in touch with his Brazilian roots, so he met a girl from Brazil. He lived in the United States, but still found a partner from the motherland. She made his life complete,” he said. “In a sense, LatinEuro is a story about roots. It allows daters to go back to their ethnic origins and find someone.”