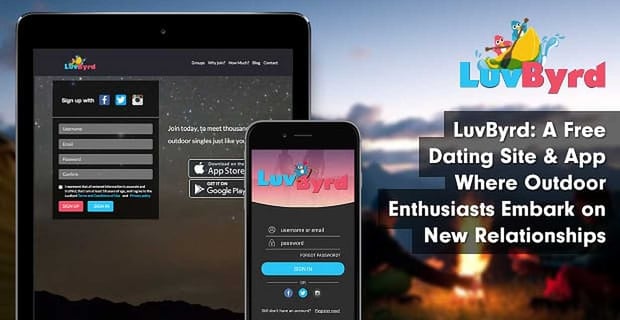 The Short Version: What makes the great outdoors even greater is having someone to share the sights and experiences with. After all, exploring your feelings for another person can be just as thrilling as exploring new terrain. Networking with your fellow adventurers is easy and fun on LuvByrd, a Colorado-based dating site full of outgoing singles who enjoy hiking, biking, climbing, and boating. With no algorithms to force matches, the platform encourages active daters to meet more organically based on their own personal preferences. Local groups and frequent events help daters break the ice in a community centered around a love of outdoor activities. If you want to reach the summit of dating success, joining LuvByrd is a good first step to an adventurous first date.

When Mike Keshian promoted his fledgling dating site on social media, he didn’t expect that it would be the start of his own love story. The young Coloradoan created LuvByrd in 2014 to match up outdoor enthusiasts on dates, and he ended up finding his compatible match along the way.

Mike Keshian knows LuvByrd’s network can bring people together in meaningful ways because he experienced it for himself.

Mike shared a link to LuvByrd on Facebook because he hoped his friends and family would help him spread the word. And they did.

Before the 26-year-old self-starter knew it, a friend of a friend contacted him about the outdoor-friendly site, making suggestions for how she thought it could be better. The conversation led to a fun first date where they bonded over a mutual interest in traveling. Their romantic connection only grew stronger with time.

Three years later, Mike and Kelly are still together and have traveled to 12 states, visited three countries, and enjoyed countless adventures in the outdoors. “I’m my favorite success story,” LuvByrd’s CEO said with a wink.

LuvByrd operates on a freemium model, meaning it’s completely free to join the dating site and communicate online, but you can choose to pay for premium features to grease the wheels and make the experience more fun. If you want to see who’s visited your profile, for instance, it costs a couple bucks.

Niche dating websites unite people through a common passion or personal trait, and love of the outdoors is the unifying factor for LuvByrd members. When singles browse on LuvByrd for a match, they can feel confident that their date prospects will have enough common ground to make the conversation flow smoothly from the get-go. Users can see on someone’s profile the activities they’re into and the adventures they’ve been on, which takes the guesswork out of online dating.

“We want our users to connect with someone who enjoys the same activities as they do,” Mike said. “LuvByrd lets users know right away what they enjoy doing in the outdoors!”

A Youthful Following With an Average Age of 31

LuvByrd profiles are in-depth assessments of an individual’s personality, interests, and experiences. Free-form sections invite users to fill in the blanks on prompts like “My craziest outdoor adventure was” and “What’s the one thing on your bucket list you’d like to try tomorrow?” Then, in the Interests section, users can show their range by checking dozens of fun activities on land and on water.

It’s 100% free to search for matches and chat people up on LuvByrd.

From amusement parks to volleyball, the activities enjoyed by members run the gamut. It’s a young and active crowd on the site, with an average age of 31. The membership is 53% male and 47% female, so active daters have a fairly even playing field to meet likely partners.

LuvByrd has a presence in every state in the US, but by far its strongest foothold is in Colorado where the mountains attract many outdoorsy folks. Mike lives in Colorado, and he has grown the site primarily through word of mouth and local networking. As a result, about 60% of LuvByrd users hail from Colorado. The dating site is always growing and changing alongside its members and has pioneered outdoor dating in 12 countries worldwide.

Users Plot Their Own Course to a Compatible Match

One of LuvByrd’s most innovative features is the lack of complex features. The dating site does not use complicated algorithms to divine matches from on high. Instead of the site using matching tools to tell its members what they like, the members use search tools to tell the site what they like. Users can search by gender, age, location, summer activity, and winter activity to find a year-round companion who has similar interests.

“What I wanted to do with LuvByrd is give everyone an opportunity to connect with whomever,” Mike said, adding that he didn’t think restrictive algorithms were the way to go. Who was he to tell singles who to talk to? He figured his users are the best authority on what they want, so he lets them decide which search parameters to prioritize. “With LuvByrd, you create your own search for your partner,” he explained. “There is no created algorithm — though you might say the user creates his or her own algorithm.”

The dating site brings like-minded people together and lets them take it from there. LuvByrd suggests certain matches (in the Connections tab) based on specific criteria, but it mostly leaves users to their own devices in the dating scene. Independent daters love the ability to make their own way without a bunch of fancy-schmancy matching tools getting in the way of a true connection.

Mike also prods outdoor enthusiasts toward romance by hosting engaging events. The most popular event is Chairlift Speed Dating, which challenges skiers to get to know one another in a speed date on a chairlift. Hundreds of people come out to hit the slopes and meet one another in a cool mountainous location. You can explore your feelings for another person at themed events hosted for intrepid LuvByrd members in the West.

It’s all about getting engaged in the outdoor community in any way that excites you. In the words of a LuvByrd blog post, “LuvByrd welcomes you to try a new bike or hiking trail, which could be just what you need to conquer your fear of first dates.”

Success Stories Make the Work That Much Sweeter

Though he is El Capitán, Mike doesn’t run LuvByrd solo. He works alongside a web development team based in Armenia and relies on their technical expertise to execute his vision. Mike pays the bills by working as a Lyft and Uber driver during the day, but at night he devotes his time to the passion project he hopes to grow into a lucrative business. The responsibility of making the site the best it can be rests solidly on his shoulders. “Mostly, I handle everything,” he said, “and that can definitely be very stressful at times.”

What makes it well worthwhile for him is the knowledge that his work has a substantial impact on people’s lives. LuvByrd can make an immediate difference in a person’s life by creating pathways toward a new social circle, companion, or date prospect.

“LuvByrd is, by far, the most Colorado-themed dating site in the world.” — The Rooster Magazine

At an event in Colorado, Mike ran into a couple who told him they had met on his dating site. They enthusiastically thanked him for being their online matchmaker. Other dating websites hadn’t worked for them, but LuvByrd did the trick. The couple said they felt an immediate and genuine connection because they both love spending time in the outdoors. Mike feels grateful to be part of such touching love stories in Colorado and abroad.

“Every time I hear a story like this,” he said, “I get chills running through my body. I can’t believe I’ve actually been able to help someone I’ve never met potentially spend their life with someone. It’s an incredible and emotional feeling!”

Find an Outdoorsy Companion on LuvByrd

Whether you’re into hang gliding or snorkeling, LuvByrd welcomes people with a variety of outdoor interests, so it’s easy to build friendships and relationships while chatting about what you love. As the site’s network grows, singles of all walks of life have the chance to put themselves out there and find the romantic adventure of a lifetime.

On Luvbyrd, you could meet your next hiking buddy or long-term partner with a simple search. If you long to trek through the mountains of Colorado or visit the beaches of California, joining this dynamic dating site is a fun way to open you up to new experiences with new people.

With his eyes on the horizon, Mike told us he’s on the lookout for investors who can help him expand his resources and connect adventurers around the world. His ultimate goal is to bring others the same joy he found with his girlfriend. That way, no one has to venture out on their own. Happy trails!