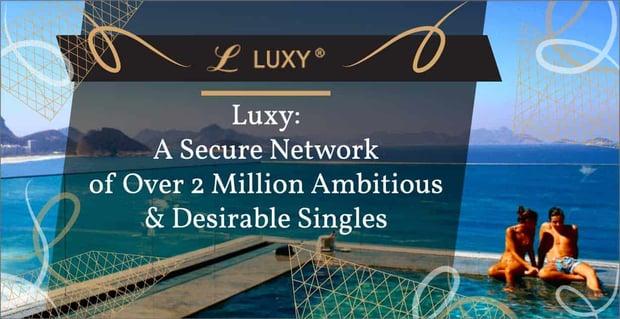 Luxy: A Secure Network of Over 2 Million Ambitious & Desirable Singles

Short Version: Luxy is an elite dating site and app designed to connect intelligent and successful singles who expect a little more from their dates. New members have to undergo a two-step screening process to earn the approval of the Luxy team as well as Luxy members before mingling in this quality-driven dating pool. In 2018, Luxy focused on beefing up its security measures and nearly doubled its user base so it now reaches over 2 million users worldwide.

Online dating has changed the way singles meet each other by making unlimited date prospects accessible to all. Now vast dating networks offer a sea of choices, but all those options can drown singles in indecision if they don’t have the proper filters.

Many dating sites will welcome anyone with an email address with no questions asked. These sites generally want to create as many signups as possible — even if such open-arms policies sometimes lead to an influx of unsavory characters and fake profiles.

As a high-end dating platform, Luxy has chosen to close the floodgates and ensure that only the deserving few may enter its dominion. The Luxy dating community is built on putting quality before quantity, and the team isn’t afraid to turn away singles who don’t quite measure up.

New members must request to join Luxy and receive up votes from 50% of current Luxy users within 24 hours. The site calls this “vouching you in.” All users have is a couple photos and a short bio to judge you on, so you better be sure to put your best pics forward. Once you’ve made the cut, a member of the Luxy team will go in to review the profile and make sure it meets the community standards.

Singles have to pass an admissions process to gain entry to Luxy.

Luxy has high expectations for the people in its community, and many singles are clamoring to be counted among its esteemed members.

In 2017, Luxy had over 1.3 million users. Today, it has exceeded 2 million users. Looking to the future, the Luxy team is intent upon growing in a smart direction and maintaining the standards of its community even as it expands its influence on an international scale in the U.S., Europe, and South America.

“On Luxy, we overcame the issue of catfishing and love scams by reviewing every new profile and demanding picture verification,” said a spokesperson for the Luxy team. “Now, we will revolutionize the industry by implementing a user quality check, making the process to join us more transparent.”

In the last year, Luxy has focused on upping its security and developing high-tech tools to keep members from running into trouble online. Its AI filtering system, for instance, gives preference to profiles with desirable and verified qualifications.

Luxy continues to deliver on its promise to connect elite singles around the world.

From its very beginning, Luxy takes the time to ensure its members are a cut above the rest. If the dating profile doesn’t meet with the approval of the users and the team, then it won’t be added to the membership base.

The unique signup process isn’t the only security mechanism in place on the site. Luxy can also verify profile pictures and provide a badge to build trust among users. This verification system can prove without a doubt that no catfishing is going on, and that brings a lot of authenticity and value to the platform.

Luxy has also taken strides to verify users by linking dating profiles with social media accounts on LinkedIn, Instagram, or Facebook. This speeds up the signup process, and it also authenticates information on the profile.

Finally, Luxy has integrated blockchain technology to upgrade its security system and create a completely safe space for singles with a lot on the line. Dating sites often require singles to give out a lot of personal information about their appearance, background, income, and goals, and Luxy keeps that data under lock and key so it doesn’t fall into disreputable hands.

Luxy prides itself on attracting the best and brightest singles around, and it doesn’t admit just anyone into its exclusive membership. After singles have earned their spot in the app, they have to live up to the Luxy Community Guidelines.

These guidelines state that all members must be authentic in their profiles and respectful in their interactions with other users. The team takes proactive measures to rid the site of fake profiles and inactive accounts.

“On Luxy, we see people looking for realness and quality,” the Luxy spokesperson explained. “Online dating is at a turning point. Many platforms are filled with fake accounts, fake users, and impersonal profiles.”

Luxy has tightened its verification and vetting processes in the last year.

Luxy listens to customer feedback to come up with new ways to improve the dating service. The team has heard positive comments about the platform’s security and exclusivity, so it has doubled down on those key features.

Making Luxy mobile-friendly has been another major project for the development team. According to internal analytics, many users access Luxy from both mobile devices and desktops, so it’s important to ensure a smooth transition and user-friendly experience on all devices.

The Luxy Pro app currently has 4.8 stars in the App Store. “I like the fact that not just anyone can get in,” said Meme545. “Really weeds out all the people you don’t want to encounter.”

Luxy appeals to a diverse crowd of singles all over the world. The app brands itself as a “millionaire’s app,” but it’s really for any highly successful and attractive person seeking a date.

“On Luxy, people can be sure to meet like-minded singles within the same economic brackets and with similar goals or backgrounds,” the spokesperson for the site said. “People using Luxy know they will meet quality and real singles who appreciate the community.”

The Luxy team receives many thank-you notes from men and women who met their dream dates on the platform and have gone on to get married or start families. These stories remind the team why they got into the business in the first place. They’re changing lives by creating a streamlined matchmaking system.

David and Emily are both Princeton graduates, but they didn’t meet at school — they met on Luxy. The dating app matched the couple, and a month later they were in a committed relationship.

A senior couple named Barbara and Ronald also met on Luxy and have been together for over three years now. “Get a positive attitude and get on Luxy,” said Barbara in her testimonial.

Luxy introduces singles to the most compatible dates and gives the opportunity to develop real, long-lasting relationships online.

This smart matchmaking system has proven effective time and time again. Luxy may not have the largest dating network in the industry, but the platform has made a positive difference in people’s lives by investing in the quality of its membership.

“We constantly improve Luxy to give users a real reason why they should choose us,” the Luxy spokesperson explained. “The competition can be brutal, but it’s all worth it when you really change somebody’s life by bringing people together.”

Online dating services can put thousands or even millions of singles together in a virtual space, but people often don’t need millions of choices. They need a way to narrow down all those results to a few compatible and attractive profiles. That’s what Luxy is there for.

Luxy is a premium dating platform where educated, wealthy, and gorgeous singles can find dates on their level. This dating network isn’t for everyone. Only the cream of the crop can gain entry and enjoy Luxy’s secure service.

“I hope Luxy sets an example in security and privacy in online dating,” the Luxy spokesperson said. “We utilize blockchain technology to secure our system information, and we verify our users’ identities in an easy acceptable process on our platform.”