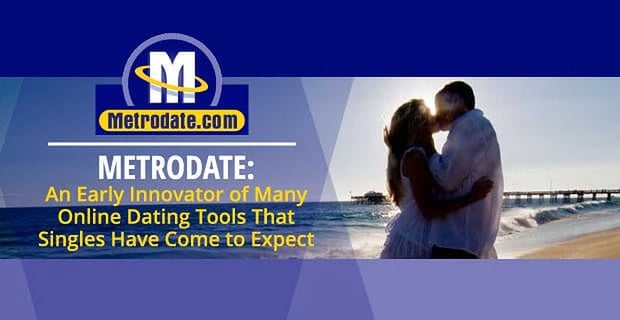 Metrodate: An Early Innovator of Many Online Dating Tools That Singles Have Come to Expect

The Short Version: Created in 1998, Metrodate was an early online dating platform that also came to popularize many features common on dating apps today — like local matching and searchable profiles. Users see a customized version of the website depending on their location and restaurants and businesses in those cities can post events — free of charge — to entice singles. Metrodate hasn’t changed considerably in the last 20 years, but it hasn’t needed to. Today, the platform is free to use and boasts more than 1 million members worldwide.

Metrodate was established early in the online dating platform era, and it helped set the tone for today’s robust industry. About 20 years ago, Metrodate began rolling out several innovative features that daters now view as necessary for not only dating services but also for most apps in general.

Those features, developed in 1998, include localized search, through which users can see profiles of members who live near them. Before Metrodate, most dating websites didn’t let users search by location; in fact, many dating and matchmaking companies used catalogs as the preferred method for helping users find compatible singles.

Another feature that Metrodate popularized was advanced search, which enables users to choose their desired age range, type of relationship they’re seeking, and their location. In the same vein, Metrodate allows users to mark if they’re not interested in a potential match.

“Metrodate was the first site to offer many of the features we take for granted in modern dating sites,” Metrodate Founder Brad Pliner said.

While Metrodate was one of the first platforms to deploy these features, it hasn’t marketed itself as aggressively as other dating sites. Instead, it has grown organically over the last two decades as Brad has continued his pursuit of other business passions.

Shortly after creating the website, Brad set his sights on developing platforms outside of the dating world. Today Brad, along with his wife, Debra, Brad focuses most of his attention on developing and maintaining the platform for mental health support TherapyNotes.

A Pioneering Site With More Than 1 Million Members Worldwide

Though Metrodate doesn’t have a maintenance team comparable to that of other dating platforms, it maintains a popularity with users that other dating websites would envy. The platform has a presence in the United States, Canada, the United Kingdom, and India, to name a few of the 200 countries Metrodate reaches.

“Metrodate has about 1.1 million members around the world and is available in 13 different languages,” Brad said.

The platform skyrocketed in popularity when it changed from its paid subscription model to a free, ad-based platform. Though the website doesn’t have all the bells and whistles of newer dating platforms, it has the features that users appreciate. These include video and voice chat to help users get to know one another. Chat rooms and forums are also popular features.

For safety, Metrodate watermarks users’ profile photos to prevent use by scammers. Users appreciate that fake profiles are taken down from the site after they are reported to moderators.

Those features and security measures have helped many MetroDate users find the long-term romance they sought on the platform. Though Brad said he doesn’t maintain statistics of users who have found lasting relationships, the site has compiled testimonials from users around the world.

One member from Northern Ireland shared a story of a successful match: “I met my soulmate through Metrodate.com and love him very much. We hope to spend the rest of our lives together.”

Another user from Pennsylvania reports: “I met the love of my life on your site in July of 2006. We have been together every weekend since and were engaged this past Valentine’s Day.”

Events and Restaurant Guides for Singles in Many Different Cities

One feature that has always made MetroDate stand out is its city-specific content. Depending on a user’s location, the site finds local matches, relevant singles events, and area restaurants. For example, if you log onto Metrodate from Orlando, you’ll only see singles who live in your region, unless you manually perform a zip code search outside of your area.

If users live in small towns or cities without an active Metrodate presence, they may need to look outside of their area to find potential partners. To accomplish that, they simply need to change their zip code on the search bar.

The Singles Events page for each location allows local businesses to list events that might be appropriate for a date. These events can include smart date night ideas like bar crawls, concerts, or nightlife.

Metrodate Founder Brad Pliner is pursuing other business opportunities, but still keeps the platform running himself.

The Restaurants feature enables users to search through local eateries where they may want to take a match on a first or second date. Singles Travel is another way for users to step outside of their comfort zone when meeting others.

If users want to contact other members in their area, they have several tools for initiating correspondence. If you’re interested in a user on the site, you can send that person an email or a “virtual flirt.” You can also contact users in your city through a local message board, which is a particularly popular way to let other users know that you’re new to the area.

Metrodate users in a variety of dating situations turn to the platform — from casual dating to those looking for marriage — turn to the platform to improve their chances of finding a compatible connection. So, if you’re not interested in pursuing a particular type of relationship, be more specific on your profile.

The more information you add to your profile, the more likely you are to find a suitable match — and the more prominently you’ll show up in searches by other users. For example, if you have a voice message as part of your profile, you’ll appear higher up in search results, leading to more interest from potential dates.

Metrodate is Anticipating Big Changes in the Future

Over the past 20 years, MetroDate has grown and maintained a large fan base. Brad said that the site may see some significant upgrades in 2018, and he recognizes the platform has had — and will continue to have — an impact on the lives of its users.

“It’s great to hear when people have found their special someone on Metrodate,” he said. “My cousin met his wife on Metrodate, so their kids are the best reminder to me that the platform has made a difference.”

Even though Brad is involved in other ventures, he still wants to make MetroDate a competitive platform in the world of online dating. He has plans to further develop it, position it for the future, and ensure that its organic growth is nurtured.

on came to DatingAdvice in 2016 with more than 15 years of editorial experience behind him. He has experience editing, writing, and designing at numerous publications, including the Gainesville Sun. Jon enjoys researching emerging trends and seeking out the companies, organizations, and individuals making an impact in the modern world of dating. He excels at working closely with writers and editors to improve the quality of online content.