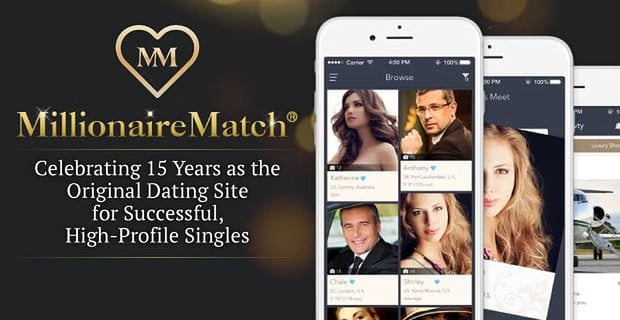 The Short Version: MillionaireMatch.com was created in 2001 with the mission to help wealthy singles find that special someone who can relate to and welcome their busy, luxurious lifestyles. Fifteen years and more than 2.7 million users later, MillionaireMatch has become a go-to dating site for successful, high-profile singles — thanks to a multi-talented team that’s committed to its members.

Successful, high-profile singles often have specific dating standards. They’re looking for someone who’s accepting of their busy schedules, enjoys a luxurious lifestyle, and, most importantly, likes them for them — not their money or fame.

MillionaireMatch.com is the first and largest dating site for wealthy singles.

These men and women could try having their friends or family set them up or sign up for a mainstream dating site, but it can be hard for those avenues to meet their particular needs. The avenue that can do that is MillionaireMatch.com.

Founded in 2001, MillionaireMatch (also known as MM) is the original dating site dedicated to wealthy singles, serving an exclusive, elite clientele that includes CEOs, doctors, super models, and even celebrities. And with 2.7 million+ users, it’s also the largest dating site of its kind.

The site is celebrating its 15th anniversary this year, so we reached out to John Martinuk, Customer Support Manager, to learn more about MM’s secret sauce for success.

Because this could be someone’s first time venturing into online dating, MillionaireMatch puts members’ comfort and satisfaction above anything else, and that’s something we really admire about them. From the layout to the team’s responsiveness, convenience is always taken into consideration.

The interface is clean and free of flashy distractions, which means it only takes a few minutes to get going on MM. Plus customer support reps, like John, offer 24-hour support via phone and email, helping members every step of the way — whether it’s signing up, creating a profile, searching through singles, or communicating with a match. There’s also an extensive Help/FAQ page (complete with a search box so members can get specific about their issue) that covers even more topics, such as changing a username and tips for online dating safety.

MillionaireMatch prides itself on customer service, offering 24/7 support and an extensive FAQ page.

Convenience is also factored into the membership options. It’s free to join, fill out a profile, and browse members, so singles can fully test out the site before taking the leap. MillionaireMatch doesn’t want to rush or trick people into signing up just so they get a sale — they want members to unequivocally know this is the right site for them.

“That’s where I think we shine is that we’re not pressuring people to pay for memberships or anything like that,” John said.

It’s a simple concept: The more the process is laid out plainly for singles and the more personalized help they receive, the easier it is for them to have success in online dating. And more sites in the dating industry could take a cue from MillionaireMatch on this kind of thinking.

“We just want to provide a helpful service and place online where people can easily come together and know they’re going to meet people who have the same interest and they’re able to share their story,” John said.

A Welcoming Environment for Successful Singles of Varying Degrees

While MillionaireMatch is known as a dating site for, well, millionaires, it’s also open to people who aren’t in the lifestyle but are interested in it and are successful in their own right — whether that’s in their career, hobby, appearance, or anything else.

I wish I knew about this site a long time ago. MM is the epitome of what a dating site should be, to link people who honestly want to find someone in their life. — Bella, Windsor Canada

MillionaireMatch has also made a name for itself as a social networking hub for members — bringing together a variety of people from a variety of backgrounds through its active forum for swapping stories and Member Luxury section for sharing photos of favorite personal items.

MM’s Journey to the 15-Year Milestone

MillionaireMatch got its start in 2001 during the initial stages of online dating. One of the first daughter sites of SuccessfulMatch.com, MM was created to address an under-served corner of the market. Throughout the years, the site has consistently seen upticks, even during times of financial stress like the Great Recession.

“People are always going to be searching for a partner or looking for love regardless of what’s going on around them,” John explained.

Because of its hardworking team and care for its members, MillionaireMatch has had 15 successful years.

One of the main reasons the site has been able to avoid downfalls is because of the passionate and dedicated people behind it. Besides sharing in the workload, they also learn to be Jack and Jills of all trades — no matter if it’s customer support, public relations, or affiliate marketing. A great example of this is John, who joined the team in 2005 as a customer service representative and is now one of the leaders of the company.

John also attributes the site’s 15 years of success to not just listening to their members but also to their staff.

“We have an open-door policy when it comes to making suggestions about what can we improve, what needs to be changed, how we deal with this or that. No idea is ever shot down. We’ll always investigate it and see what it would take to implement it,” he said. “We’re happy that we’re still around, and I feel it’s due to what we’re offering.”

In terms of MillionaireMatch’s future, John said they’ll continue to keep a finger on the pulse of what users want and transition the brand to one for elite singles — never shying away from new trends in the ever-evolving world of online dating.

“It’s almost like some sites are kicking and screaming into a new year or what have you. We try to stay away from that,” he said. “Our goal for the future is to continue doing what we’re doing, innovating, taking care of our customers, and making sure we’re offering the best services we can. We feel with all of those basics, we’ve got our bases covered and can continue to be successful.”