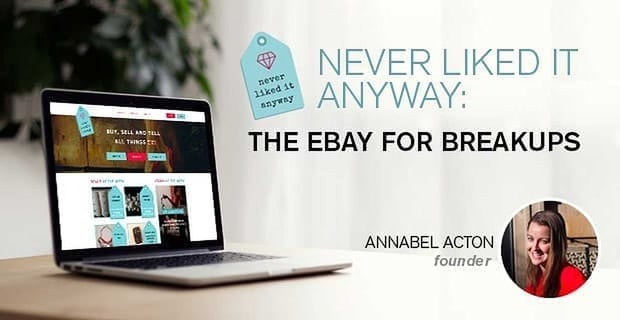 TL;DR: If you’ve ever had an item left over from a breakup that you just can’t stand looking at anymore, Never Liked It Anyway is THE site for you. Giving you the option to buy, sell and tell all things ex, NLIA truly is the eBay for breakups.

Breakups suck, but one of the worst parts is when everything in your apartment reminds you of your ex.

That ring he gave you that’s too big, those artisanal glass flutes you got on your first road trip, the concert tickets you bought on a whim to go see his favorite band – all remind you that you’re now single.

With Never Liked It Anyway, you can now get rid of that stuff while getting rid of the memory of your ex all at the same time. Who wouldn’t love that?!

A cathartic way to get over a breakup

Founder Annabel Acton started the site in 2012 as a way for women to “shed the stories and the stuff.”

She knows most women aren’t going to wear the jewelry or use the furniture ever again, so why not give them a way to be active in their breakups?

Annabel Acton is the founder of Never Liked It Anyway, the eBay for breakups.

“It’s just a permanent reminder of the things that went wrong. There are so many memories attached to things, and sometimes it’s just easier to start again,” she said. “We’re really about trying to find the silver lining faster, so our mission is to help people feel fabulous faster.”

Not only do users offer a real-world price and a breakup price when creating an item listing, but they also can share their bounce-back plans, things they’re going to do with the money to help them through the healing process, such as taking a trip to China to learn Mandarin or getting that pixie haircut they’ve always dreamed of.

The site has sold more than 5,000 items over the past two years, the most expensive being an $18,500 ring and the weirdest being a body pillow, and there’s even a TV show in the works.

But beyond all that, Acton said it’s the site’s balance of humor and support that members are raving about.

“I think people enjoy the quirkiness of it and the fact that it’s the first step to taking back control,” she said. “It’s the whole experience of you’ve got to vent and tell your story, and even when you start to think about your bounce-back plan, you start to pick yourself up a little bit.”

Having good come out of a bad situation

Instead of using breakups as a way to bash exes or give up on love, Never Liked It Anyway uses breakups as a way to give back to the community by donating 10 percent of its profits to the American Heart Association, which Acton said helps to keep things in perspective.

“When you’re feeling awful, it’s nice to remember there are other people who have bigger problems than your own,” she said.

And Acton only wants that concept to grow by inviting celebrities to sell their breakup baggage and give ALL of the profits to the charity of their choice. She’s even had one celebrity already take part – one of the women from “The Real Housewives of D.C.” sold her wedding dress and donated the money.

“If we can start encouraging people to sell and donate all of the profits, that would be amazing,” she said.

Never Liked It Anyway donates 10 percent of its profits to the American Heart Association.

Acton also hopes to offer more to her users by providing branded content and working with other companies that want to help women on the road to recovery, whether that’s through gym memberships, makeovers and more.

“It’s about knowing your worth and owning that,” she said. “We just want to make sure we become known for an attitude, which is just about ‘You deserve the best. Yes, it sucks now, but put your best foot forward and you’ll get back to your own fabulous soon enough.'”

White Label Dating: The #1 Tool for Building a Dating Site