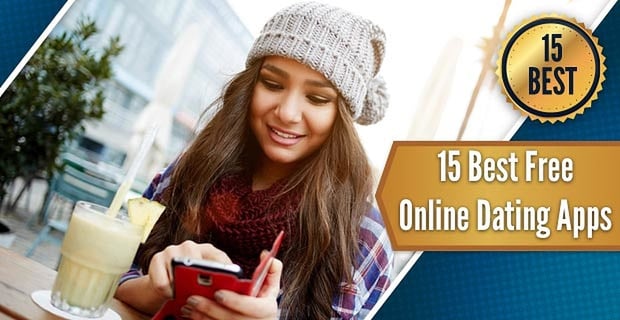 More than 8,000 dating sites and apps have launched since the 1990s, and we’re pretty sure that number isn’t going to get smaller anytime soon. Online and mobile dating has become one of the preferred ways for singles to meet, and for good reason. It’s convenient, it’s easy, it works, and it’s affordable… because the most popular dating platforms are free.

With so many options out there, we thought we’d narrow it down to the cream of the crop. Below are our 15 favorite online dating apps, chosen based on their popularity, reputation, success rates, pricing, and other features. Take a look!

Zoosk was one of the first dating sites to offer a mobile app, so you know it’s got to be good. You can download Zoosk for free via the App Store or Google Play Store, and there’s an option to sign up via Facebook or Google+, which means your basic info and suggested profile photos will be pulled from your existing profiles. To browse matches, go to the Carousel and click the heart if you’re interested, the X if you’re not, or Maybe if you’re not sure.

Match has been a dating household name since its launch in 1995, and its app provides an equally good romantic experience. It has 4 out of 5 stars on Google Play and 3.2 stars out of 5 on iTunes, and one happy user named James Adkins said the app is “easy to use” and “very versatile.” Download Match for free and see for yourself. The app allows you to view profiles, receive matches, and flirt without providing any payment information.

EliteSingles has a user base of millions of high-caliber singles. By high-caliber, we mean approximately 82% of members have earned a bachelor’s degree, 90% are at least 30 years old, a majority are within the upper income range, and practically all of them are interested in a long-term relationship. When you register, which is free to do, you’ll take the EliteSingles trademarked personality assessment, which the app uses to find you the best matches.

eharmony is a serious dating app in that it’s mostly for commitment-minded and Christian-oriented singles, but that doesn’t mean you won’t have fun during the process. In fact, the most work you’ll have to do is take the 29 Dimensions of Compatibility Questionnaire, and then you can sit back while the app does all the match searching for you. You also have the option of using eharmony Icebreakers (a fun, image-based quiz) if you aren’t sure how to start the conversation.

If you’re a Christian and finding someone with similar religious beliefs is a dating must-have, we think you’ll have the best luck on ChristianMingle. The app has a large user base, with more than 3 million monthly visitors, and it welcomes singles of all denominations, backgrounds, and orientations. You don’t even have to be Christian to sign up! ChristianMingle’s app has a 3.6-star rating in the App Store and a 3-star rating in the Google Play Store. Some positive comments include “Great app” from Grimey 1991, and “I like it very much” from one user on Google Play.

OurTime is a senior-focused dating app, with the largest portion of its audience in the 50+ age bracket. You won’t have to pay anything to become a member, browse, and flirt. But probably one of the biggest perks is OurTime is a sister app of SeniorPeopleMeet, so your profile will appear for free on both platforms. Since you don’t have to search too hard for matches based on age, you can focus more on hobbies, education, appearance, life goals, and similar identifiers.

BlackPeopleMeet is a great choice for black and biracial men and women, and for those open to interracial dating. It should take you a few minutes, at the most, to sign up. All the app asks for is some details about you and your personality, a few photos, and your preferences in terms of gender, sexual orientation, location, culture, background, ideology, career, etc. Thousands of African-American singles use BlackPeopleMeet to narrow their search for a hot date in the black community.

Tinder revolutionized the dating industry with its swiping and GPS-based matching process, and now it’s responsible for billions of matches a day and millions of dates each week. The app is available in more than 190 countries, and it has 4 stars and 3.9 stars on Google and iTunes, respectively. Take it from Tinder itself: “The people we meet change our lives. Tinder empowers users around the world to create new connections that otherwise might never have been possible.”

Bumble was created out of a need to improve the experience women were having on superficial dating apps (e.g., being bombarded with inappropriate messages and photos). On this app, only the women can initiate the conversation. If you’re gay, lesbian, or bisexual, either person can initiate. You have one day to send that first message, and then the person has one day to reply. If that doesn’t happen, the match goes away. Singles seem to love Bumble, too, as it has 4.1 stars in the App Store and 3.5 stars on Google Play.

OkCupid has one of the most detailed matching systems of any dating app, which means its pairings tend to be spot-on. After you answer several questions about yourself, you’ll tell the app how you want potential dates and/ or partners to answer those questions. Finally, you’ll give those answers a ranking of importance (e.g., very or somewhat). OkCupid has been totally free since its inception, but the app does offer a few premium features for purchase, including boosting your profile in search results, if you’re interested.

Often nicknamed “the anti-Tinder,” Hinge says, “We believe the quality of your relationships determines the quality of your life.” In addition, its motto is “thoughtful dating for thoughtful people.” Hinge is all about making it easy to break the ice, so the app requires users to like or comment on another user’s profile or photos and say what caught their eye. Hinge, which has been featured in publications like The Washington Post, Business Insider, and Mashable, doesn’t require you to input any payment information to send messages or likes on the app. Go ahead and give it a try — you’ve got nothing to lose!

At Happn, you’ll “find the people you’ve crossed paths with.” When you’re going about your day, Happn will notify you when you’ve crossed paths with another member, so you can find out if you like the same bars, restaurants, parks, and activities. You can see the time and place of your last encounter, and you can secretly like them. If they like you, too, it’s a match. With almost a 5-star rating on Google Play and almost a 4-star rating on iTunes, Happn is a popular choice.

Grindr works in almost the same way as Tinder, but it’s specifically for gay, bisexual, and curious men. The app was founded in 2009, it has more than 4.2 million users, and it’s available in more than 192 countries. Not to mention Grindr is absolutely free. Grindr Xtra does cost money, but you can meet and communicate with matches without it. Grinder also deeply cares about helping the LGBT community, so the company is always working on campaigns that users can take part in.

Because these 15 sites and apps are the best of the best, we’re confident you’ll be happy with any of them. But we’d still recommend trying a few out for yourself before making the big decision to upgrade or subscribe. If you want to improve your odds of meeting that special someone, sign up for one, two, or even three apps — they’re all easy to pick up on. And remember to have fun!