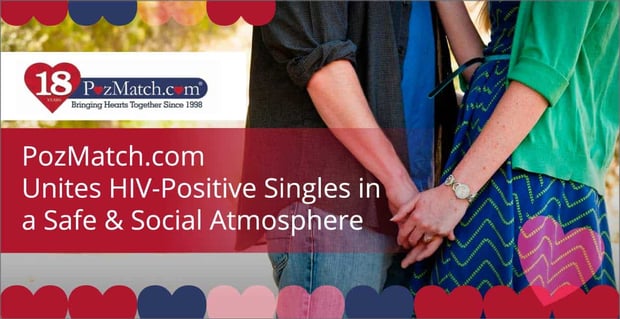 The Short Version: Since 1998, PozMatch.com has been a secure dating site for HIV-positive singles around the world. This nonjudgmental platform welcomes people of all backgrounds and gives them the space they need to grow, heal, and find love. PozMatch members can use the discussion forums, search tools, and instant messaging features to build connections in the HIV community worldwide.

Ant Babajee was diagnosed as HIV-positive just after the new year in 2007. If he could go back in time to that sobering day in January, Ant said the first thing he would tell himself is not to panic.

“You are the same person you were before you got your news,” he wrote. “You are still worthy of love and respect.”

“No one is going to force me back into the viral closet,” said Ant Babajee, who is HIV-positive.

Over the last decade, Ant has come to terms with his virus and become “unashamedly positive.” Ant credits his close circle of friends for giving him the courage to move forward without shame or regret. By volunteering with HIV charities and attending support group meetings, Ant surrounded himself with people who understood what he was going through as a single man with HIV.

Of course, not everyone feels comfortable coming out of the HIV closet in person, and that’s where the HIV dating site PozMatch can offer much-needed support. This niche site fosters a safe and anonymous environment where HIV-positive singles can ask questions, build friendships, and find love. PozMatch brings singles together in a close-knit HIV-positive community.

Health topics aren’t taboo here. Singles can openly identify as HIV-positive on their PozMatch dating profiles, and that can be liberating for people who may not have told their closest friends or family members about their diagnosis yet.

Since it launched in 1998, PozMatch has facilitated many productive discussions about HIV and its impact on the dating scene. Singles can use this platform as a place to talk out their fears, explore their date options, and create social connections in a uniquely positive space.

HIV-positive singles can feel isolated by the disease, but they aren’t alone. Over 36.9 million people around the world live with HIV/AIDS, and some 5,000 new infections occur each day.

After an HIV diagnosis, many people agonize over the future. They wonder how and when to tell their loved ones. They worry about the judgment and fear surrounding the disease, and they stress over whether their love lives will ever be the same.

PozMatch can comfort singles during these uncertain times and offer reassurance that love is possible regardless of your health status.

PozMatch is dedicated to helping HIV-positive singles meet one another.

The team prides itself on offering a nonjudgmental community where HIV-positive singles can talk about their experiences, fears, and hopes. The community welcomes people of all ages, orientations, and races. If you have HIV or are willing to date someone with HIV, you can sign up for free and start mingling in group forums and private messages.

The PozMatch community has slightly more men than women online. According to internal analytics, about 69.43% of visitors identify as men and 30.57% identify as women.

The dating site’s membership base also skews slightly younger. Just over 52% of members are under 35, and over 13.46% are over 65. PozMatch has advanced search filters to help singles find people in the same age bracket or location.

Most users browse under a nickname, so they can retain a bit of privacy. However, the dating site’s anti-fraud system verifies the identity of new users and ensures they’re there for the right reasons.

PozMatch empowers HIV-positive singles to make meaningful connections online. The site has all the bells and whistles of a traditional dating site, but it also has an open forum designed to answer HIV-related questions and concerns.

Over 1,200 members have posted dating advice and given encouragement to HIV-positive singles in the online dating scene. This free space fosters a lot of growth and builds a sense of community. Members offer one another safety tips and first date suggestions as well as personal testimonials about their experiences dating with HIV.

“Don’t play games,” wrote one member in a post. “Games really shouldn’t enter into the dating and relationship arena… [it] creates unnecessary drama.”

The forums and blogs foster an active dialogue.

PozMatch allows HIV-positive daters to share their stories and form genuine relationships, but it also takes great pains to see to it that everyone stays safe while on the site. The team respects the user’s right to privacy, and the site doesn’t require users to out themselves by sharing their full names, occupations, or any other identifiable information.

Understandably, privacy is a major concern for many PozMatch users, so they appreciate the added anonymity and security offered by the site. A strict privacy policy ensure people’s personal data is secure. According to the policy, “We do not share personal data with third parties for their direct marketing purposes without your permission.”

PozMatch members can contact the privacy team via email to cancel an account and delete all personal data relating to that account. Such requests are generally honored within 30 days of receipt. Once PozMatch has deleted the account, the user will not be able to restore or retrieve that data, and all membership plans will be automatically terminated.

A Data Protection Officer oversees the dating site’s privacy practices and can answer any questions about how personal data is used, shared, and retained on PozMatch. Send an email to support@pozmatch.com to find out more.

PozMatch Meets the Needs of the HIV-Positive Community

PozMatch has successfully connected countless HIV-positive daters around the world, and the proactive team continues to grow its network to help more people find camaraderie and companionship after an HIV diagnosis.

Since its launch in 1998, PozMatch has challenged the stigma against people with HIV and provided a space where online daters start again. The singles on this site share a common struggle, and that gives them a common bond. Thanks to PozMatch, HIV-positive singles don’t have to hide in the shadows or face their illness alone.

Your health status doesn’t have to hold you back from the life you want. By engaging in the HIV-positive community, you can meet open-hearted people who will see you for you, not your diagnosis. Ant said he has known plenty of HIV-positive friends who have gone on to be in committed relationships and even have children.

“I won’t lie to you: It can be tough at times living with the virus,” Ant said. “Although there might be challenging times ahead, you can make HIV a small part of your life.”