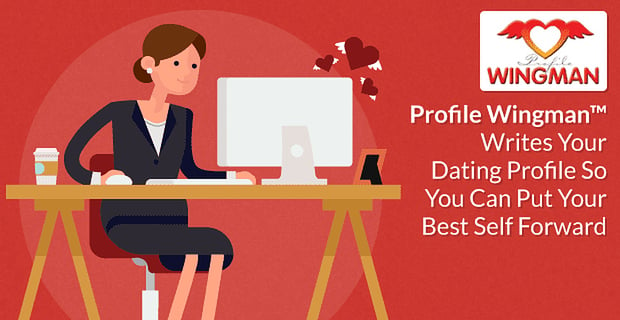 The Short Version: Nanci Kavich started Profile Wingman with her friend Marcia Kapustin as a solution to a recurring problem they saw in the dating world — too many people were posting dating profiles of themselves that just weren’t working. After a little research and some ego-boosting success stories, Nanci and Marcia were able to launch Profile Wingman in 2013. Now Profile Wingman helps hundreds of clients a year attract more matches and make better connections — thanks to Nanci’s talent for writing profiles and emails in ways that capture each client’s unique voice.

When writing casually online, so much of your voice can be lost. There is no “sarcasm” tool, just bold and italics to emphasize your text. There’s no way to ensure that the person reading your words on the other side of the screen will pick up on your implied joke or your subtle shift in tone.

Even a skilled author, be it of novels or legal briefs, can struggle with personal, text-based communication, especially when it comes to walking that fine line between selling yourself and being humble. Add to that research that shows an online profile with just two spelling or grammar errors (such as “to” instead of “too”) can slash your chances of a response by 14%, and it’s easy to see why people would want professional help to increase their chances of getting a date.

A limited success rate is exactly what encouraged a distinguished professor to seek help with his Match dating profile a few years ago, and he turned to his two friends, Nanci Kavich and Marcia Kapustin, for their input.

When Nanci finished with the profile printout, it was covered in red ink.

“Marcia had the lightbulb,” Nanci said. “She looked at me right then and said, ‘This is your calling.’” It was in that moment the two women wondered if they could create a viable business out of helping others with their dating profiles.

Judging by the success of Profile Wingman, which now helps write dating profiles for hundreds of clients a year, it seems Nanci and Marcia did just that.

In Profile Writing, It’s All About Capturing Your Voice

After that night nearly four years ago when Nanci and Marcia helped their friend with his dating profile, they did some market research and discovered profile writing was a limited service offered by only a few websites at that time.

“About a month and $126 later, we had our site up and running,” Nanci said. “And we’ve been helping people ever since.”

Since the beginning, Nanci and Marcia have relied heavily on each other to keep Profile Wingman going. Nanci serves as the creative mind, writing the profiles and doling out dating advice, while Marcia manages the business side of the company by running the website and handling the finances.

Nanci Kavich, Co-Creator of Profile Wingman, tries to capture her clients’ spirit in every profile.

Nanci then told us the story of one of her first clients — a woman seeking a friend for billiards. The caveat? The woman was ex-military with a tough exterior, so Nanci thought adding a little pep into her profile would help. Instead, the woman was furious the new profile didn’t sound like her.

“Right then and there I learned I can’t put myself onto them,” Nanci said of her experience with the woman. “I learned I had to be true to who they are and their voice.”

She offered to rewrite the profile until she captured the woman’s personality. The second time around, Nanci nailed it. In fact, Nanci said since then, she’s never written the same profile twice — each one is completely personalized to that person’s tone.

Another client Nanci worked with was a recently widowed man who hadn’t been on the dating scene in a while. Not only did Nanci help him with his profile, she even went as far as to give him dating tips including what to wear and where to go.

To ensure she best captures the spirit of her clients, Nanci spends a lot of time researching what works best and even uses herself as a guinea pig on different sites to test how the online dating community responds — as well as to get a feel for the sites themselves.

Depending on where people are in their dating life, they can choose either the concierge service or the complete profile build out when they hire Profile Wingman. The main difference between the two offerings is you receive much more hand-holding with concierge, but at slightly more than double the price of the $175 profile build out service — still a bargain when compared to other profile writing services that can charge $1,000 or more.

“You know, we keep our prices low because, honestly, I think it is a reasonable price point,” Nanci said. “I’m not just doing this to get paid; I truly want to help people.”

Included in the concierge service is profile writing, photo selection assistance, and even email and date advice for up to four weeks (if clients want more help, they can convert to a subscription service called Wingmen at Your Service for $225 each month). Nanci recommends the full-service option to clients who may be unfamiliar with the current dating landscape, are too busy to deal with dating nuances on their own, or who may just want more on-demand advice.

Another popular service is the free profile photo review, but be warned. Nanci said she is brutally honest in her feedback. However, her clients appreciate the honesty and even return when they get new photos of themselves.

Nanci explained she prefers to meet her clients via Skype or FaceTime. Usually these calls last between one and two hours and cover all the necessary basics, but the most important aspect is to actually get a visual of her clients.

“I like to see them when we’re talking because I’m gaining their voice and getting a real sense of who they are with their mannerisms and everything,” she said.

Once Nanci reviews the client’s photos and has conducted the interview, she usually gives them her version of their profile within a few days. From there, if they don’t ask for any revisions, clients can upload the content directly to the dating websites they’re on. Concierge service clients also receive ongoing support for four weeks, and each week Nanci will help clients initiate or respond to up to six emails.

Most of her clients tend to be highly educated business professionals, often in the IT world and usually in their upper 30s or 40s, although she frequently helps older clients who haven’t been in the dating scene for 30 years or more. “They’re smart enough to know they need help,” she said. So far, Nanci’s clientele is about a 65-35 split between male and female users.

One of her clients, a wealthy, recently divorced man wanting to show off a little, hired Nanci for her concierge service to help with his profile and email correspondence. “One of his pictures was of the ocean, and it was captioned, ‘This is my backyard,’ and I had to explain that he wasn’t going to attract the kind of women he wanted that way.”

After Nanci worked her magic on his profile, the man asked her to write to a woman he had already messaged three times prior with no response. Nanci zeroed in on a few details in the woman’s profile and received a reply. The two started dating, and that was the last Nanci heard from the man.

As Dating Changes, Profile Wingman Will Be There to Help

Mannerisms, quirks, and humor are often lost in the online dating process, and those little things are exactly what Nanci tries to capture in her profile writing.

Just as Nanci prefers to conduct her interviews through video for those reasons, she thinks the future of online dating should (and will) trend toward that as well. With video, you truly get a sense of the person, she said, which helps put daters at ease and helps them make better decisions as to whether they should actually go out with the person on the other side of the screen.

Regardless of the future of dating in the digital age, the mission of Profile Wingman will remain true to why she started it in the first place: to help other people so they won’t need her in the future.

While she still finds herself using a lot of red ink, over the years she has tried to work in more explanations so her clients understand the suggestions and changes she makes to their writing.

“I want to be able to eventually send clients on their way able to do this all on their own,” she said.