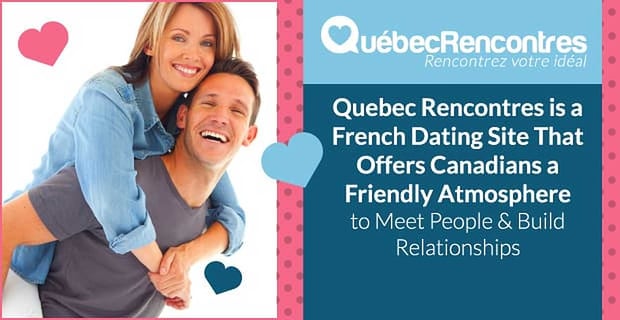 The Short Version: Quebec singles looking for love need look no further than QuebecRencontres.com. This French Canadian dating site offers many valuable free features, including profile creation and access to videos, as well as unique premium features like the ability to send and receive voice messages online. Since its founding in 1997, over 2.5 million people have joined Quebec Rencontres, which boasts being the oldest and largest dating network in the region. Although it’s been around for decades, the platform continues to evolve and grow. In June 2018, the team plans to release an app to help its members stay in touch wherever they go. Anyone interested in putting down roots in Quebec can join Quebec Rencontres for free and start making serious connections with high-caliber singles.

QuebecRencontres.com is one of the longest-running French dating sites in Canada. It got started in 1997 as a personal ad dating service that used voice mail correspondence to introduce singles. Singles could publish a bio in the local newspaper and put an anonymous number where they could receive messages from date prospects. The founders set up a convenient online platform where people could call and leave messages as a way of forming a friendship or starting a romance.

Over the last couple decades, the site has evolved into a full-blown dating site for Quebec singles. The platform has kept its signature voice messaging feature and continues to create new features to put a personal touch on online dating.

Quebec Rencontres is a convenient dating site for French-speaking singles living in Quebec.

The site’s friendly atmosphere attracts many local Canadians seeking a date. Quebec Rencontres offers users many free features, including a detailed profile creation, unlimited browsing, and access to videos and voice messages. Quebec singles of all ages and orientations are welcome on this vast dating network.

If you’re serious about meeting someone special, you can sign up and start browsing dating profiles until you find someone worth messaging.

“Quebec Rencontres is a site aimed at finding and grooming relationships,” said Catherine Dumas, the General Director of Business Development. “We’re one of the most important dating sites in Quebec.”

With over 2.5 million members to its name, Quebec Rencontres is the largest Quebec dating site in existence. If you live in Quebec, this platform offers you more local date prospects than any of its competitors, and it’s free to join and browse the profiles.

Every day, thousands of new members sign up to see what Quebec Rencontres is all about. Most are looking for more than a short-term fling — they’re interested in getting into a long-term relationship with someone in their area.

According to the dating site’s internal stats, its members range in age from around 25 to 54, but the largest demographic is between 35 and 44 years old. The gender breakdown shows a split of 55% to 45% between men and women, respectively, so it’s an even playing field for all members.

Quebec Rencontres welcomes male and female members from all corners of Quebec.

The dating site doesn’t just throw its members into the lion’s den of online dating, however — the team provides worthwhile tips and tricks for members seeking real-life connection. The Quebec Rencontres blog is full of helpful dating advice on everything from the first date to the marriage proposal.

“Our main focus is really trying to make the experience easier for people trying to meet a partner,” Catherine told us. “We’re not a site looking to be the next best thing. We just try to consistently improve the experience on the site.”

High-Value Features Deepen Your Understanding of the Dating World

Quebec Rencontres has all the features you’d expect a high-caliber quality-driven dating site to have. You can sign up as a man, woman, or couple seeking a man, woman, or couple. You can connect your dating profile to your Facebook account to make adding pictures and personal information a snap. You can search for matches by age, gender, orientation, and location. You can favorite or like your online crush — or you can send a text or voice message.

The voice messaging system sets Quebec Rencontres apart from other online dating services. Members can record and send voice messages to make themselves stand out to their love interests. This is a premium service available to subscribed members. Hearing someone’s voice can help singles get a better feel for who that person is, and it’s more intimate than sending a written message via private chat.

Singles can also use the dating site’s Coups de Coeur matching system (similar to Tinder’s swiping) to form mutual matches and get the ball rolling with a cutie online.

Signing up to Quebec Rencontres involves filling out a detailed questionnaire regarding your habits, goals, and personality traits.

A couple years ago, Quebec Rencontres introduced an in-depth personality test as a way to reinforce its match system. By providing key information about themselves, users could increase the odds of the algorithm zeroing in on someone who meets their standards. The profile includes optional sections regarding appearance, lifestyle, personality traits, and interests.

“We use a personality test to help people find a better match,” Catherine said. “That’s one of the most important features of Quebec Rencontres.”

The personality test can also help users take a moment of introspection before diving into online dating to consider what they want and who they are. They can gain a better understanding of themselves and their relationship goals by filling out the questionnaire.

“Our site definitely offers tools to better understand the process of dating and be better at it,” Catherine said. “We’re actually bringing people together, and that adds to the feeling of contributing something positive to people’s lives.”

Inspirational Testimonials From Those Who Found Love

Since its launch in 1997, Quebec Rencontres has successfully matched countless single Canadians.

Vero3131, a woman from Brossard, said she would still recommend the dating site to singles even though she met her love interest in the real world and not online.

Yeuxbleus2545, on the other hand, said she met the man of her dreams on Quebec Rencontres. Early on in their relationship they started talking about getting engaged. Because when you’re with the right person, you just know.

“Thank you very much. I met a wonderful man through your site, and I highly recommend it.” — Dameamour1958, a Quebec Rencontres user

A 69-year-old man from Lachute joined the dating site under the name Tigris33 and found a match within three weeks. He said the woman he met was everything he ever wanted in his future partner. He said he’s hoping to spend many days with her by his side.

When asked why he was suspending his membership on Quebec Rencontres, Louise7317 simply said, “I found love.”

What began as a messaging system for singles has expanded into a localized dating site designed to facilitate genuine relationships. Quebec Rencontres is responsible for connecting millions of singles throughout Canada, and it continues to grow thanks to user feedback.

The Quebec Rencontres team is always updating the platform to meet the needs of its modern singles. The launch of its app this summer is a necessary step to make the dating network more accessible to Canadians on the go.

“The app will allow people to stay connected and aware of activity on the site,” Catherine said, “which is useful because people are using it more and more as a social network as well as a dating platform.”

Whether you’re looking for a compatible date or a new friend, Quebec Rencontres can help you build valuable relationships based on common interests. Bonne chance!