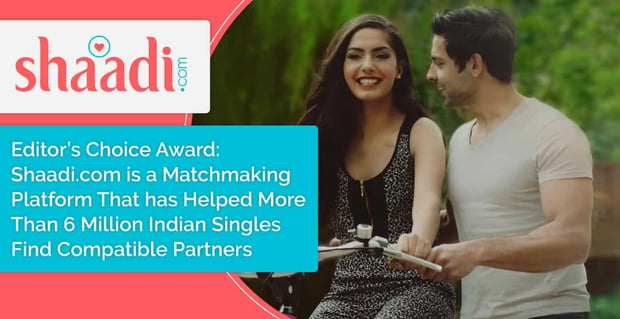 The Short Version: Most Indian singles not only want to find someone with whom they share interests, but also complementary lifestyles and occupations. That’s exactly what Shaadi.com helps them do. With its personalized matchmaking services, the app connects Indian singles across borders. For fostering more than 6 million success stories in India — and counting — Shaadi.com has earned our Editor’s Choice Award™.

It’s hard enough for singles anywhere to find someone they’re attracted to and with whom they share interests. But Indian singles often have many more characteristics to take into consideration when choosing a compatible partner.

Traditionally, older, connected women would search their networks to find a suitable match for singles in their community. That worked for generations because most of those singles didn’t interact much with people outside of their region.

But, as technology connects Indian singles to a broader world of possibilities, interests, and cultures, that dynamic is shifting. That’s why many modern Indian singles are taking their marriage search into their own hands on the Shaadi.com matchmaking platform.

The service allows singles to search for partners by setting customized parameters to find those whom they find compatible, interesting, and attractive.

Shaadi.com was designed with Indian singles in mind, and it helps them find lasting love.

“We tried to give modern Indians a platform to discover each other — and within their own busy schedules,” said Pamit D. Anand, Business Head of Shaadi.com. “One of the things we found was that a lot of Indians were looking for very specific requirements of their partners.”

Shaadi.com was founded in 1996 as Sagai.com, and it now reaches India, the United Kingdom, the United States, and many other countries with large populations of Indian singles.

Today, Shaadi.com has millions of members, and it’s responsible for more than 6 million success stories. More Indian singles continue to flock to the platform and mobile app to meet their lifelong partners.

One reason why many dating apps and sites aren’t as successful in India is that they’re not designed to help users find life partners. But Shaadi.com is different. It starts with a mission to help singles find lasting love.

Users can begin by setting up a free profile on the site and entering their basic information. They can also sort potential matches by religion, as well as by their mother tongue. Those can be vital aspects of a great match, Pamit said.

“A cultural match is a combination of many things singles look for,” he said. ” For example, if they live in the Hindi Belt, they look for other people from the Hindi belt. About 40% of those are Hindi speaking in their mother tongue, but we represent many different demographic audiences within that area.”

The platform makes it simple to sign up and begin searching for a partner.

Plus, Indians also look for partners who have the same educational backgrounds and occupations. Doctors often look to marry other doctors, for example, so they know their partner will understand their busy lifestyle.

Those aspects of Shaadi.com differ from many other platforms in the Western world, where singles often decide on dates based on attraction. And, because India is a multilingual and multi-ethnic country with many other differences among its five regions, the Shaadi.com team built an algorithm that helps singles in certain regions skip the people who are the least compatible with them.

Pamit said that helping singles in the country, including urban markets where singles may be willing to look past some cultural differences, is a tricky business — but one they love.

“It’s a complex science in India, compared to the rest of the Western world,” he said.

Today, Indian singles want the ability to search far and wide for an ideal mate. And the Shaadi.com app helps facilitate those matches.

Pamit said that it’s become increasingly common — thanks to technology like video conferencing — to have two Indian singles enjoy an extended courtship while living in different countries.

“We find it very sweet, and it’s reflective of the times we live in,” he said. “This, to me, constitutes something very Indian. Indians are spread across the globe, and cross-border marriages are becoming increasingly common. Technology helping to take away the limitations of physical proximity.”

One of the many successful marriages the platform has fostered was between a woman who was living in Canada, working as an IT professional, and a man who was an investment banker in India. It took eight months for them to meet in person, but they already knew each other because they had been dating through video chats on Shaadi.com the entire time.

Shaadi.com has helped more than 6 million Indian singles connect since it was launched.

Often, couples who meet through the app submit their success story videos, which the Shaadi.com team appreciates. Like the singles themselves, the team of matchmakers works hard behind the scenes to help users meet someone who fits all of their criteria. The marriages make it all worthwhile, Pamit said.

“In a sense, you can only do as much as you can,” he said, “But if we did not have so many success stories, it would be difficult to be in the business.”

Shaadi.com: A New Personalized Service Brings the Platform to Life

“We found that many people are simply unable to find time to pursue another person, fix up a date, or try to get a response on the other side,” Pamit told us. “People lead very busy lives, and, while we are entirely digital, it’s good to have credibility in customer services and offline manual matchmaking.”

The Shaadi.com team is looking at opportunities to branch out into non-Indian markets as well. The platform’s algorithm has seen great success within the country, and the company believes that there is a need elsewhere for that success.

“We use our artificial intelligence technology to predict what kinds of matches are best suited for each user, depending on where they are coming from, educational background, likes, and interests,” Pamit said. “Now, we’re trying to take that technology and compete with global players in the industry.”

What’s more, with so many other dating sites launching in India, some singles are open to the idea of dating for fun rather than to find a life partner. To that extent, Shaadi.com is considering branching out into the casual dating market.

But the team still plans to focus on connecting people looking for love, who may otherwise never find each other — especially when the timing is critical.

“The users have a limited time to get it right,” Pamit said. “It’s a fairly scientific problem to solve, but we’ve done a great job there.”