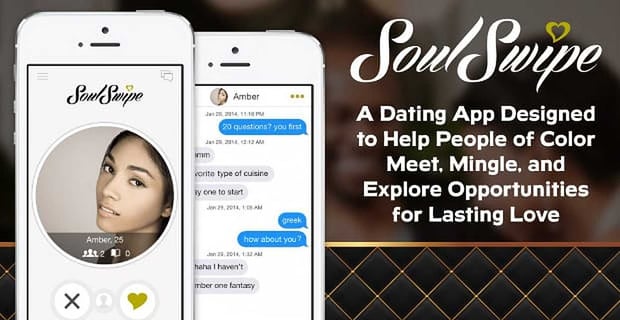 The Short Version: African-American singles often struggle in terms of finding love on general dating sites. Studies show a latent racial basis negatively impacts how many messages, likes, and date invitations black singles, particularly black women, receive online. The SoulSwipe founders didn’t think that was acceptable, so they decided to do something about it. In 2015, they launched the free dating app as a way to change the online dating status quo by addressing the needs of black singles around the world. A spokesperson for SoulSwipe told us the inspiration for the app came from a desire to make a difference in the lives of African-American singles and bring people together via simple swipe-right and matching tools. Today, SoulSwipe sees over 70,000 visits per day and gives black singles a welcoming place to call their own.

OkCupid made a splash in the online dating industry when it released internal data showing that 82% of non-black men on the site had a bias against black women in terms of their online response rates.

When the founders of SoulSwipe read those statistics, they felt compelled to take action. They realized they had an opportunity to help singles of all races and fill a void in the online dating market.

In 2015, they launched the free location-based dating app to bring singles in the African-American community together. The app’s tagline is “Black dating, done right,” and thousands of black singles have used the straightforward swiping and matching tools to build connections with people online. Users can download SoulSwipe for free on iTunes or the Google Play Store.

“We’ve been around for two and a half years, and we’ve grown at a fast rate,” said a SoulSwipe spokesperson. “We want African-Americans to be able to come together, feel comfortable, and meet like-minded individuals.”

Over 70,000 singles use SoulSwipe every day to make connections in the black community.

A Urbangyal blogger named Veronica said SoulSwipe was exactly what she needed to move her love life in the right direction. She had tried Tinder in the past, but she thought its membership lacked diversity. When she gave SoulSwipe a try, she said it was like a breath of fresh air.

“I spent maybe 30 minutes swiping left or right and then closed the app,” she said. “By the end of the first day, I had about 20 to 25 matches.”

Within a week, Veronica had met five guys who sparked her interest. She set up a date with the top contender — a guy named Joey — and, when the date went well, she decided to delete the app and pursue a relationship. “I’ve hit it off with Joey, so I’m taking my chances with him,” she said.

A user signs up to SoulSwipe by linking to his or her Facebook account. The app then pulls data from the social media site to populate the SoulSwipe profile. Once their profiles are set up, users can view eligible matches based on age, gender, and geographical location. SoulSwipe users can set a specific distance radius for potential matches so they only meet local singles on the app. Helpful icons on the profiles will show you if you have any common interests or mutual friends on Facebook with someone. Such tools make it easy for SoulSwipe users to find a compatible date near them.

If you’re interested in someone, you can swipe right on a picture to like the profile. If you and your crush both swipe right on each other, you’re officially a match and can start chatting.

SoulSwipe authenticates user identities by requiring new users to log in via Facebook. However, SoulSwipe does not post anything on behalf of users. You are in charge of what goes on your dating profile. You can upload pictures from your phone or from your Facebook to show off your personality and make a good impression on potential matches.

“I’m really loving SoulSwipe,” said a YouTuber named Krikous in a video reviewing SoulSwipe. “I love the people on it, and I find it incredible! I’m enjoying the matches and the conversations.”

The spokesperson said SoulSwipe’s relatability has been key to the app’s success, and the team hopes to expand to be more inclusive and helpful to black singles everywhere.“We are a female-friendly app,” he said, “and we want all of our users to feel respected.”

SoulSwipe’s user base is 49% female, and the team is proud of this because dating apps tend to attract more males. A recent update to the app has given the interface a fresh look and feel. According to the spokesperson, the new version “is more of a feed style than the regular swipe right and swipe left. We’re testing this out to see if users like it, and we’re always making improvements.”

Built to Answer the Need for Diversity in Online Dating

SoulSwipe’s rapid rise in popularity has shown that black singles want a more diverse alternative to mainstream online dating. Its most active users can be found in big cities, including New York City, Los Angeles, and Houston, where there is a large African-American population.

“We have 70,000 users logging in on a daily basis,” the spokesperson said. “We’re still very much a startup, and people often think we’re larger than we are due to our growth.”

From its headquarters in L.A., the SoulSwipe team manages an international dating platform.

Niche black apps, like SoulSwipe, prioritize African-American daters and welcome anyone attracted to people of color.

Danielle Young, an online lifestyle editor, appreciated the diverse dating pool SoulSwipe provided her. “I want to see more black and brown faces,” she wrote about her online dating experience. “This does not mean that you won’t see white people because there’s always plenty of people who want some milk with their coffee.”

Success Stories from Users Who’ve Been Swiped Off Their Feet

The spokesperson told us SoulSwipe’s mission is to help singles find lasting connections. That’s what keeps them going from day to day.

“It’s the success stories of people getting together or having children that really keep us motivated,” the spokesperson said. “We hear about one every three to four days. This has gone way past what we thought we could accomplish.”

One Twitter user posted a wedding photo and said, “2016 was one of the best years of my life. I married this amazing man. Thank you, SoulSwipe, for my husband.”

“We met on SoulSwipe less than two years ago, and we just got married,” said Alicia Minter, who posted her beach wedding photos on Instagram. “Even though we both live in Brooklyn, we met in Maryland when we were both home visiting our parents for Christmas.”

Alicia said she knew she had met “The One” by their third date when he came to her home during a blizzard with an armful of groceries. “We watched movies, the snow piling up, and cooked for days — that’s when I knew that he was special!”

Up Next for SoulSwipe: Expanding the Brand to Make Connections in the Black Community

The spokesperson said he still marvels at the fact that one idea has impacted the love lives of so many people around the world, and SoulSwipe is just getting started. The team plans to take the app to the next level in the coming months by emphasizing location-based matching and encouraging users to meet up in person and start a relationship.

Since it launched in 2015, SoulSwipe has expanded largely through word of mouth, but it has also gotten a few bumps from high-profile mentions by media outlets and celebrities. For instance, Drake referenced SoulSwipe in a song, and Big Sean said he was an active SoulSwiper. Plus, many satisfied users like Veronica have given the app stellar reviews and helped build the reputation of the fast-growing dating app.

“We met on SoulSwipe less than two years ago, and we just got married.” — Alicia, a SoulSwipe user

Hearing many remarkable success stories from SoulSwipe’s users inspire the team to continue moving forward and working hard to make the app the best it can be.

“Every time we get an email, a tweet, or an Instagram post about people getting engaged or having children thanks to SoulSwipe, it really blows our minds,” the spokesperson said. “We went into this just wanting to help people, and now people are getting married and having children. It’s unbelievable.”

As a true romantic and people-lover at heart, Khaya Caine is happy to bring her expertise as a Parent and Community Engagement Specialist and Certified Professional Dating Coach to DatineAdvice.com. Khaya honed her sharp communication and writing skills as a journalist and copy editor at a daily newspaper. And, on DatingAdvice.com, it's Khaya's goal to help inform today's singles of the solutions that make finding love in the modern world a reality.