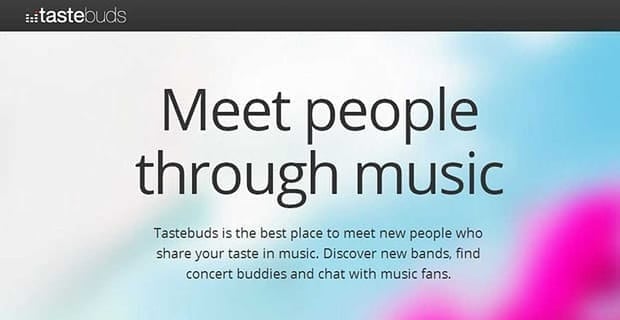 TL;DR: Instead of being matched with someone based on zip code, wouldn’t you rather be matched with someone who you know doesn’t listen to Nickelback? Well that’s what Tastebuds.fm is for. As a highly successful music social network site, Tastebuds is the #1 way to find your musical soul mate.

For people who are struggling to meet their harmonious matches and are slightly wary of traditional dating platforms, you won’t find a site that strikes the right chord better than Tastebuds.

And with a growing user base (with help from the acquisition of its U.S. competitor moosify Inc.), Tastebuds is quickly becoming the lead singer in the band called love.

Putting music at the forefront

Co-founders and band mates Alex Parish and Julian Keenaghan created the U.K.-based site in 2010 after struggling to meet potential girlfriends who had similar tastes in music.

As web developers, they took matters into their own hands, launching a mobile prototype that puts music at the forefront.

After experiencing great success with the prototype in such a short amount of time (a feature on Masahable doesn’t hurt), Parish and Keenaghan realized there was a gap they could fill.

“We knew there was a demand for this interest-based dating,” Parish said.

More than 300,000 users and millions of matches later, Tastebuds has carved a solid space for itself in the dating industry.

A fun alternative to traditional dating

Instead of matching and presenting users based on age and location, Tastebuds pairs people based on their playlists and categorizes them accordingly, like “The Beatles Fans.”

Parish said using playlists as a matchmaking tool takes pressure off members to create an alluring dating profile, which is required on most dating sites, and often is a better reflection of who a person is.

In fact, half of Tastebuds’ users have never used a traditional online dating site.

“The music can say a lot about you, and I think it’s a good indicator of your personality as well,” he said. “It’s a fun, lower pressure way to meet people and start a conversation. We hope to make meeting people interesting and not feel embarrassing.”

Parish, who met his girlfriend on the site over their love of bands like The Shins and M83, said while their average user is a fan of rock and indie, the site caters to a variety of genres, all in the hopes of making connecting easier.

“Our opinion isn’t really that music is the end-all, be-all, but it’s a great way of breaking the ice,” he said. “Music is a great way of connecting people and starting conversations.”

What acquiring moosify means for the company

It looks like there are only clear skies ahead for this music-loving site.

With the takeover of moosify comes its brand, technology and more than 100,000 users.

The acquisition also means Tastebuds can tackle some of its bigger projects sooner, including expanding globally and launching an app for Android.

“We’ve done well in the U.K… but we’ve always felt we needed to make a big impact in the U.S.,” Parish said. “It’s going to have a great impact on the site in terms of user activity and getting people engaged. Maybe Tastebuds users who have been on the site for a while but have never had too many people near them might have matches.”