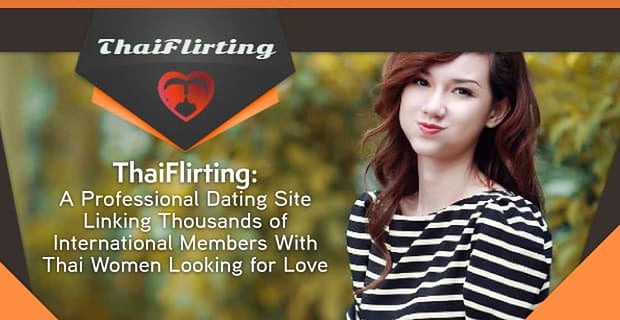 The Short Version: Since 2013, ThaiFlirting.com has been connecting singles around the world with Thai women and men looking for friendship and love. The site boasts the advantage of being based in Thailand, which gives the team direct insight into the Thai online dating scene and the eligible singles who populate it. From the profile watchdogs who keep the database safe to the multi-lingual staff there to help members, ThaiFlirting is a place where international daters can focus on finding that special someone in an intimate environment.

When he set out on his quest to find his soulmate, William could have never guessed his journey to happiness would take him through more than 20 countries in four years. By the time he reached Thailand, he looked the part of a world traveler. His long beard seemed to embody the wisdom he had gained from his cross-continent trek, but his eyes retained the youthful sparkle of hope that he would soon meet his match.

After seven months in the country, William fell in love with the culture and knew his destiny had to be intertwined with a Thai woman. That’s when he discovered ThaiFlirting.com and struck up a conversation with Palin.

“We spoke, and I said if we make it a year together, I would marry her,” William said.

Thousands of couples, like William and Palin, have found love on ThaiFlirting.com.

The site’s intuitive search features made it simple for William to find Palin. Her profile represented everything he was looking for in a partner, and, when the two began talking, both of them knew their bond would last.

While inspirational, William and Palin’s story is not unique. Thousands of singles worldwide are turning to ThaiFlirting to connect with Thai women and men. It’s a full-feature dating site with a personalized feel that delivers the communication tools international daters need to foster bonds across borders. And, as William attests, it can work for anyone.

“To those looking, don’t give up,” he said. “Be sure what you want, and don’t compromise.”

ThaiFlirting was founded in Thailand to build a bridge between Thai women and men with foreigners. Thousands of members meet up from all over the world to share stories, have a chat, and look for a soulmate.

“We have the unique advantage of being based in Thailand and have a real understanding of Thai social connections,” said Alice K., ThaiFlirting’s Spokesperson. “We provide professional services leading to friendship, dating, romance and even marriage.”

Alice told us ThaiFlirting members range from 18 to 80 years old. Men on the site are generally from Europe, America, and Australia, whereas the women are predominantly Thai.

In the four+ years ThaiFlirting has been active, it has grown by leaps and bounds because those who find love often refer their friends and family.

Setting up a profile on ThaiFlirting is easy. Simply enter the required information when prompted and attach pictures. Alice told us one of the special profile features ThaiFlirting uses to protect members is photo verification.

“Using photos, our team verifies profiles are real people and that they are using a current photo,” she said.

But ThaiFlirting’s member protections don’t end there. The site delivers additional features to keep scammers or dishonest members out of its system. Alice said the site’s Report feature is very helpful when trying to weed out imposters or those with malicious intent.

“All members can blacklist and send us a report on members who display unpleasant behavior,” she said. “We then check the profiles and delete them if they are suspected as scammers or fake profiles.”

Once your profile is set up, you have access to chat with the Thai singles who catch your eye.

ThaiFlirting also consults members to keep them from feeling unsafe or from receiving unwanted solicitations.

“We urge members not to give email addresses or phone numbers,” Alice said. “This isn’t because we want to deny or block members from contacting each other. Rather, it’s because we care about security and privacy and don’t want members to get spam, any sort of scam solicitation, or have their accounts hacked.”

Instead of providing direct personal contact information, Alice told us the ThaiFlirting team recommends members give possible matches their Facebook, Skype, or other social media information.

“We think they are safer in the long run, and our members are our first priority,” she said. “After all, it’s better to be safe than sorry.”

With all the security and confidentiality concerns out of the way, members can focus on building connections on ThaiFlirting. The site’s search functionalities make it simple to find the right match. Users can sort profiles by gender, age, and whether they’ve included a photo. When you see someone who catches your eye, you can send a sticker to say hi.

Start with sending messages, and eventually enjoy an online chat or video call to get to know each other a bit more. Once you hit the cutesy stage of your relationship, you can send kisses and virtual gifts to let your paramour know they are on your mind.

No matter your love language, the site’s features can help you authentically grow an online relationship just as you would in person. ThaiFlirting’s staff are always available to answer any questions, and the site’s Facebook page also delivers stellar support to members.

However, if someone is not behaving and being offensive, add them to your Blacklist, and they won’t be able to contact you again. You can also report a profile to keep the site safe for your fellow members. It’s a community, and ThaiFlirting takes member concerns and feedback very seriously.

It all sounds too good to be true, but it’s not. Many happy members, like William and Palin, reach out to ThaiFlirting to share their personal success stories and to thank the site for bringing them their one and only.

Jue and Pim are another example of a sweet couple who found love on the site.

“I have been a member here for quite some time,” Pim said. “I had always hoped I would find the right woman, and then it happened.”

Pim said many women reached out to him, but it was the serious chats he had with Jue that caught his attention.

“We started our relationship after a few weeks,” he said. “I traveled to Thailand, and we spent time together in Bangkok. Words can’t describe the connection she and I share with each other. Without ThaiFlirting, I can’t imagine how I could meet her in real life. I plan to marry her as soon as she is ready.”

Jack also realized his dreams when he met Bow.

“Once my account was set up with my relationship expectations and a description of what I was looking for in a partner, I received so many messages and requests,” he said. “Then one member contacted me with a cute cartoon that piqued my interest, and I had to find out who she was.”

Once Bow and Jack began chatting, they really hit it off, exchanging emails and phone calls for several months. Jack knew he was going to have to hop on a plane to meet her in person.

“Once in Thailand, I realized immediately that she was the woman I had always dreamed about, and, I was just the one for her too,” he said. “I know that things have a way of working themselves out with love, patience, perseverance, and a great partner. We will have a Thai wedding next year, and I am very excited to marry my soul mate.”

Alice said it’s examples like these that give her and the ThaiFlirting team a real sense of accomplishment.

“We get emails every day thanking us for creating the website because it enabled them to meet their love. We get quite a few wedding invitations, as well,” she said. “It’s very rewarding work.”