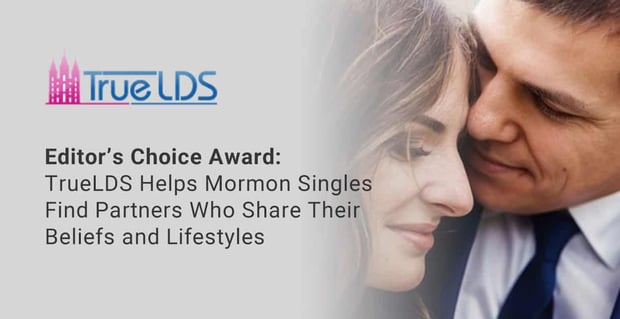 The Short Version: Latter-day Saints singles often have different expectations about love, marriage, and sex than others do, which can make it harder for them to find a compatible partner. TrueLDS is a Latter-day-Saint-focused dating site designed to solve that problem. For offering LDS singles intuitive search tools, friendly advice, and a comfortable online dating experience, TrueLDS has earned our Editor’s Choice Award.

Members of The Church of Jesus Christ of Latter-day Saints (LDS), once referred to as Mormons, highly value marriage and family. Choosing the right person to marry is particularly essential because, in Latter-day Saint theology, partners will be together forever — both in this life and the next. The church also tends to look down on divorce, instead encouraging couples to work through their differences.

So it’s no surprise that a significant percentage of the church’s adults are married. In fact, Latter-day Saints marry at a higher percentage than does the general population. According to a Pew Research study, 52% of Americans are married, while 67% of LDS adults have tied the knot.

According to the study, 85% of Latter-day Saints were married or living with a partner of the same faith because of the important role that marriage plays within the church.

Still, while many LDS singles would prefer to find a partner who shares their religious beliefs and devotion, it may be challenging. Latter-day Saints make up less than 2% of the American population, with many residing in Utah.

TrueLDS was founded to make it easier for Latter-day Saints to find each other. As a dating site that caters only to LDS singles (particularly those over 30), members can rest assured that they will interact with like-minded people.

Fred, a spokesperson for TrueLDS, talked about why the team developed the dating site.

“We founded TrueLDS because we perceived a lack of suitable dating opportunities for single Latter-day Saints over 30 years old,” Fred said.

LDS Singles Often Have More in Common With Each Other

LDS singles in their 30s, 40s, and 50s often face a smaller dating pool and may have difficulty fitting into mainstream dating culture norms because they follow certain guidelines. Latter-day Saints can’t drink alcohol, smoke tobacco, or even consume warm beverages like coffee or tea.

Practicing Latter-day Saints are also charged to keep the law of chastity, which means they abstain from sex — or even passionate kissing — before marriage.

The highest aim for a Latter-day Saint is to be eternally married in the temple. That basically excludes marrying and dating someone outside the faith, as non-members cannot enter an LDS temple.

Not drinking or smoking and keeping the law of chastity are just starting points if someone wants to be a Latter-day Saint, let alone marry a faithful member of the church. And even most single LDS women will only marry an LDS man that has served a mission.

As Latter-day Saints apostle Jeffrey R. Holland explained in a sermon on personal purity: “You run the terrible risk of such spiritual, psychic damage that you may undermine both your longing for physical intimacy and your ability to give wholehearted devotion to a later, truer love.”

The platform connects users from around the world who want to find love.

Those beliefs would make it difficult for LDS singles to date casually or participate in the general online dating culture.

The creators of TrueLDS kept that in mind when developing the website. All of the 12 staff members are Latter-day Saints themselves, and some of them are single so they can understand the struggles of finding LDS partners.

The founders combined this knowledge with their backgrounds in IT and marketing to create a platform that was straightforward and easy to use.

“TrueLDS is the only major LDS dating site that is run by fellow Latter-day Saints,” Fred explains.

An Intuitive Site That Aids Users in Their Search for Love

TrueLDS attracts users from everywhere. While only a small percent of the American population are Latter-day Saints, there are more than 16 million worldwide. Countries with significant numbers of Latter-day Saints outside of the United States include Mexico, Brazil, Chile, and Peru.

So those struggling to meet an American LDS partner can find an international partner, as well.

TrueLDS caters to Latter-day Saint singles over 30 and those who have been divorced.

“Members come from all over the world, but mainly from the Midwest United States — as do most Latter-day Saints. We know our members like no one else can. We regularly have members on TrueLDS that we personally know, or whose wards we have visited,” Fred said.

When users first join the dating platform, they create an in-depth profile. TrueLDS allows daters to write up to 6,000 characters and add 50 high-resolution images to tell a story about themselves and attract the right partners.

TrueLDS also has some recommendations for creating a stand-out profile. First, users should make sure they include a few photos that clearly show their face. Next, the platform advises that singles “write about what keeps you busy from day to day, what you enjoy doing, what your hopes and aspirations are, and how you experience being a member of the Church of Jesus Christ of Latter-Day Saints.”

The more complete the profile, the more attention it will draw. Users who leave sparse written descriptions and only include a few photos may not give other singles enough information about why they would make a good match.

The platform can help those who still find themselves struggling to create a compelling profile.

“We offer a personal service. We often assist members with creating profiles and also give personal dating advice,” Fred said.

TrueLDS supports Latter-day Saint daters by allowing them to connect with members of the community around the world. The platform enables users to share video and audio clips with everyone, with a select group of friends, or even with one special person.

Users can also find information relevant to the LDS community on the platform’s informative blog. Recent articles focused on staying safe while dating online and tips for engaging with others on a platform. One article shares techniques for sending a thoughtful first message to someone. It suggests relating to the other person by mentioning something they read in their profile — including a beloved pet or a favorite food.

“TrueLDS is a niche dating site, so we want to continue to be a refuge for single Latter-Day Saints. Most members on TrueLDS are marriage-minded, and many are divorced and have busy lives,” said Fred.

The strategies for creating a compelling profile and connecting with others have worked for many TrueLDS members. When someone finds a match and then cancels their account, they often write Fred and his team to thank them for developing the site.