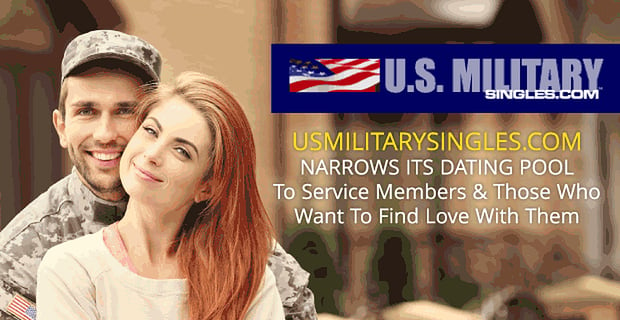 USMilitarySingles.com Narrows Its Dating Pool to Service Members & Those Who Want to Find Love With Them

Short version: USMilitarySingles.com is the largest military-focused dating site in the United States. With more than 500,000 members, the site aims to pair military members, veterans, or those interested in dating men or women who serve. The appeal of US Military Singles is that current or former members of the military can find partners who are interested in them and understand their lifestyles and values. The site has been active since 2001, and changes on the horizon will make US Military Singles more user-friendly to help service members meet the dating challenges of the 21st century.

Many singles are interested in dating former or current members of the military. Part of the reason is that military service can instill qualities like loyalty, maturity, and transparency — all of which are desirable traits for life partners.

“Military folks are good people who are supporting the country, and they’re stable,” said Donald W. Hobbs, CEO of Friends Worldwide, Inc., the parent company of US Military Singles.

There’s a reason why dating someone in uniform has become popular. Many singles on the site are there to date military members, while current members and veterans flock to the site to date those with shared experiences. US Military Singles has proven to be quite popular, growing to more than 500,000 members.

USMilitarySingles.com allows service members to find singles who want to meet them.

“A lot of women are looking for the military guys in uniform. It can be a fantasy to meet a military guy,” Donald said.

This widespread appeal of veterans as fine partners is what spurred the creation of USMilitarySingles.com in 2001. Nearly 20 years ago, the site was one of the first to offer dating in the niche.

“US Military Singles was one of the first sites — if not the first — in the military space,” Donald said. “We strive to be a place where military members can find those who admire and respect them for their efforts.”

American military personnel are not only popular stateside, as evidenced by the fact that USMilitarySingles.com attracts users from all over the world.

“Our users are spread out, demographically, over a wide area,” Donald said. “They’re mostly in the US, but we have women from the UK who like to meet military guys. And we have interest from Western European countries as well.”

Why Many People are Attracted to Soldiers & Military Personnel

According to a recent study, more than 60% of American service members are married. They also tend to marry younger than the rest of the population and are more likely to make that commitment than are people in other demographics.

The commitment by veterans and military service men and women to face adverse situations that others don’t may explain their tendency to not sweat the small stuff. This perspective could make them more willing to focus on what matters: love and relationships.

Military wife Wesley Ann Wade spoke of the dedication of service members in an article from The Leaf Chronicle: “I think marriage gives them a feeling of stability. Soldiers’ lives are constantly in danger, and a lot of them have lost friends at such a young age, so a lot of them live for the present. If they find someone they love or they want to start a family with, they want to do it now.”

Certainly, this willingness to commit, be mature, and focus on others is part of what makes military personnel such attractive partners.

US Military Singles has more than 500,000 members and is used by singles around the world.

US Military Singles is designed to connect these dedicated military folks with their admirers.

“A guy might want to be on a website where he knows he can meet a girl who’s attracted to a military person,” Donald said. “It creates higher conversions and a better experience for everyone.”

Specifically, users of the dating platform don’t have to worry that their veteran status might be a drawback for potential partners. Instead, this quality is the one that users are specifically seeking.

Users of the site are either US Army, Air Force, Navy, Marine Corps, or Coast Guard members or admirers of these service personnel. Users can easily sign up, set up profiles, and browse member photos and preferences that match their own.

“We have search features and matches we send out by email,” Donald said. “We also offer a quick registration.”

The New App Will Reach Even More Men and Women

Since its inception, US Military Singles has been focused on creating user-friendly experiences for users by prioritizing simplicity.

“We’re a basic site, but we also bring the best user experience for our members. The personality and skill sets of our developers make the site effective both in the US and overseas, where many users are stationed,” Donald said.

Users of US Military Singles like the site because it is straightforward and easy to use.

“In the old days, we had to go to clubs or bars, but, now, it’s a different atmosphere where we can use technology to connect with other people.” — Donald W. Hobbs, CEO of Friends Worldwide, Inc., the parent company of US Military Singles

“Technology might be scary or intrusive for some, but there are other aspects of technology that help people connect,” he said. “If you are single, our platform can help you meet somebody.”

However, the dating scene has changed considerably since 2001. In response to those changes, developers at US Military Singles have ensured that the dating platform works well on mobile devices.

“In the old days, we had to go to clubs or bars, but, now, it’s a different atmosphere where we can use technology to connect with other people,” Donald said. “We’re mobile responsive. The cool part about the network is the mobile site works just like an app. It feels like an app, too, and has all the same menus.”

US Military Singles is Planning Some Major Improvements

Though US Military Singles is a proven site with a substantial user base, the site will soon undergo some changes.

“We’re in the midst of a revamping of the company,” Donald said. “We’re restructuring the platform, and a lot of good things are going to happen. We’re going to take a big leap forward. It’s going to be great for both our members and the network.”

Part of the reboot will be to make the site even safer and more efficient for users — especially international users.

The US Military Singles team is planning upgrades to its site and app.

“We attract users from over the world, but we block some of those countries where there’s a lot of spam going on as part of our security efforts. This upgrade will allow for more safe traffic from those countries,” Donald said.

The platform’s overhaul will include the company’s apps as well, ensuring that they are designed for mobile devices from the ground up.

“We’re working on adding mobile apps for all of our sites,” Donald said. “Part of this restructuring will let us add SMS, video, and a lot of really cool features.”

Though the site may add more tools and features in the coming months, its overall mission will not shift.

“We’re still interested in helping and connecting people,” Donald said. “Our platform lets us serve people and give them opportunities to connect, communicate, and improve their lives.”