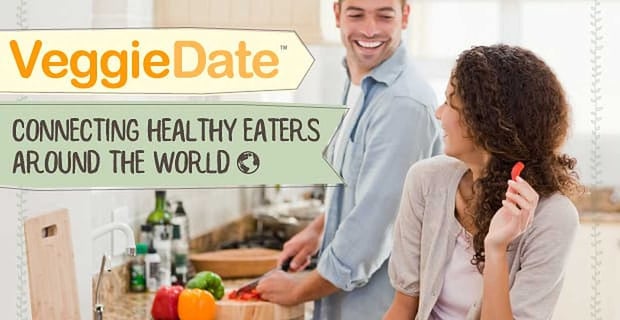 The Short Version: Steve Urow created VeggieDate.org in 1999 after he saw the lack of resources out there for single vegetarians. Today, it’s become a popular dating site and social networking platform for vegetarians — as well as people who want to help create a more compassionate, understanding world for everyone interested in the lifestyle, whether or not they are already vegetarian or vegan.

I became a vegetarian in 2008, not long after I met my sister’s now-boyfriend. He was the first vegetarian I had ever interacted with, and I got interested in learning about the lifestyle and reasoning behind it. I’d always loved animals, but I was more drawn to the health and environmental benefits, such as lowering your risk of getting cancer and helping reduce pollution.

I started off by forgoing meat while eating out, and soon I gave up beef, chicken, pork, fish, and eggs. I still consume dairy products (there are just some things this girl can’t give up, and cheese is one of them), so I’m what you’d call a lacto-vegetarian. Sure, I miss fried chicken and barbecued pork, but I’m happy with my decision.

Vegetarians like myself often have to deal with a lot of questions from people who don’t understand our way of life. “So, what do you eat?” a friend will say. “Don’t you get tired of salad?” a co-worker will joke. “But how do you live without bacon?” my dad will quip.

VeggieDate is welcoming of all types of vegetarians (lacto, ovo, semi) and vegans.

Not just that, but for most vegetarians and vegans, dating someone who not only has a similar diet but similar values is extremely important — maybe even a deal-breaker.

Enter VeggieDate.org, a dating and social networking site for vegetarians, vegans, and meat abstainers in general to connect, make friends, find a date, and just talk with people who get them.

We had the pleasure of speaking with Founder and Senior Developer Steve Urow and Manager Dave Rubin of Open Heart Dating, the current owner of VeggieDate, to learn more about the story that started it all, and the ways the site accepts and caters to a variety of people with a variety of diets.

Founded & Operated By Two Vegans Who Wanted to Address a Need

Before creating VeggieDate in 1999, Steve was working as a software engineer at a startup in Los Angeles. Steve, who calls himself a “nearly vegan,” was also passionate about animal rights activism and wanted to have a positive effect on the world in some way, so he launched his first site, GreenPeople.org. Quickly it became the world’s largest directory of stores for health food, solar power supplies, and natural beauty products.

A friend eventually recommended that he bring his passion and expertise into the online dating realm, and thus VeggieDate was born.

Steve Urow founded VeggieDate in 1999 to give vegetarians and vegans a place to connect.

In 2012, Steve sold the site to its current owner. Dave had actually used it himself for years and loved the concept. Today, Steve still helps out on the technical side of things as Senior Developer, and Dave handles most of everything else — from approving new profiles to addressing customer service issues.

Dave has identified as vegan for decades and is a leader in the Los Angeles vegan community. Through VeggieDate, Dave hopes that by helping people connect with those who share their values and lifestyle preference, it will be easier to make more compassionate choices.

“It’s important to me to do what I can to create a more compassionate world where we relate to each other more compassionately and extend the circle of compassion around all beings,” he said. “Particularly in some areas of the country and the world, there are not a lot of vegetarians or vegans, and it might be hard for them to connect. I think that’s a valuable component of VeggieDate — some people are really just looking for support or friends or activity partners, and we provide a good forum for that.”

A Space That’s Comfortable for Vegetarians & Welcoming of Others

Steve’s motivation for creating VeggieDate was to connect vegetarians who otherwise may not have the chance to connect, especially those looking for romance. He also wanted to give them a place to do so without having to explain their lifestyle choices or face judgment from people who don’t relate — and with only 3.2% of the population being vegetarian, that can happen pretty often.

“VeggieDate gives a comforting arena in which to be yourself and not have to defend your lifestyle. You can just go there and be with people who get it,” he said. “On other websites, sure, you can search by different criteria, but it’s not like the whole site is geared toward this consciousness and this level of importance in a person’s personal life.”

From Dave’s perspective, it’s also about logistics. So much of our world revolves around food, with the average person eating three meals a day plus snacks. Food is also a huge part of dating and relationships, with the first outing usually involving dinner and eventually expanding to cooking together as things progress.

All of this is especially true for vegetarians. It’s not something as simple as one person loving ketchup and the other hating it; it’s about being on the same wavelength in terms of beliefs.

“Eating is an important part of our lives and our culture, and eating together is something that’s part of a lot of relationships. I think for those reasons and more it makes sense for a lot of people, particularly if they’re an ethical vegan, to date somebody who has similar values and a similar lifestyle,” Dave said.

Steve added that they want to provide a safe space that also doesn’t alienate people, which is why members include vegetarians and vegans of all disciplines (e.g., lacto, ovo, semi) and others like macrobiotic eaters and even pescatarians. Upon sign-up, there’s also the option to choose less restrictive labels such as “vegetarian at home” or “almost vegetarian,” VeggieDate’s way of opening its arms to people.

“Sometimes in the vegetarian movement, certain people can get too militant,” Steve said. “I want the site to be open to people who are seriously exploring vegetarianism and making an effort to learn more and do more. What VeggieDate prioritizes is a down-to-earth, productive, caring, compassionate lifestyle.”

Friends or Dates — VeggieDate is the Missing Piece to the Puzzle

With over 15,000 members (ranging in ages from 18 to 80+ and located all over the world) and more than 400 new sign-ups every month, VeggieDate has come a long way since it was an idea inside Steve’s head. With Dave behind the wheel, the site is only going to keep expanding and, most importantly, keep bringing more people together.

“I just really want to serve more people and help more people to make meaningful connections in their life and find the support they need to have the compassionate lifestyle they want to have,” Dave said.

“Thank you VeggieDate! I grew up a vegetarian… so it was important to me that my partner in life had the same diet. I found this cute vegan girl’s ad. Her name was Kaiti. I asked her to be my wife. She said yes, and we are both very excited about our upcoming wedding.” — Erik, a former VeggieDate member

Steve added that his favorite stories come from those who say VeggieDate was the missing piece to the puzzle that they just couldn’t find, whether they met a romantic partner or friend through the site. As a vegetarian, I appreciate that.

“That is enjoyable to hear those kind of stories, and even the stories like ‘The site didn’t really work for me, but I did meet some nice people.’ Well, the site did work for them because they made friends; it wasn’t a waste of time,” he said.

I’ve met a lot of nice, passionate vegetarians since I became one so many years ago, and Steve and Dave are definitely at the top of that list. So, veggie lovers, take it from me — you’ll want to give VeggieDate a try.