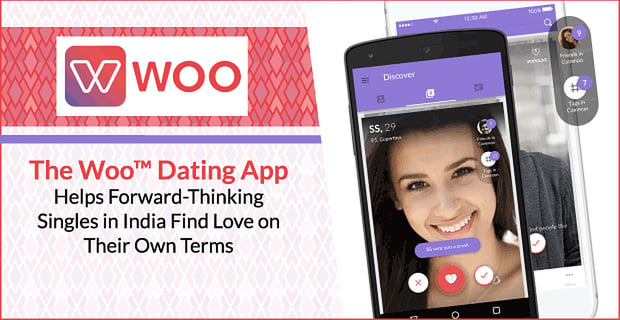 The Short Version: Woo is one of the first dating apps designed to help singles in India set up their own matches. Traditionally, marriages in India were arranged by parents, but some young Indians are starting to branch out into the world of online dating. For Woo to be successful in India, CEO and Co-Founder Sumesh Menon understood the app needed to offer features that other platforms did not. He also decided to make the app firmly pro-woman, allowing women to initiate many of the encounters. The platform incorporates hashtags, because Indian users enjoy them more than their counterparts on Western-oriented dating apps.

For centuries, Indian tradition has dictated that parents should find suitable partners for their children. This parental matchmaking attitude even made its way into the country’s first-generation dating apps. Parents were setting up profiles and finding matches for their children, rather than getting their children involved.

But the current generation of singles seeking partners and spouses is different, according to Woo CEO and Co-Founder Sumesh Menon. They want to make their own choices about their partners.

“When parents were playing matchmaker, they were looking at the community, caste, and income level,” said Sumesh. “There were so many variables that aren’t as relevant today.”

Woo CEO and Co-Founder Sumesh Menon wanted to create an app to help Indian singles find love on their own terms.

Now, young Indian daters are looking for different qualities when it comes to finding partners. They’re more likely to seek partners whose lifestyle, career, and personal ambitions mesh with theirs. Moreover, they want a person who has similar interests.

Sumesh wanted to help Indians find compatible matches by developing a dating app. Not only did he believe young daters wanted to find their own partners, but he felt they also sought simplicity to fit in with their long working hours. From that idea, Woo was born.

The app gives Indian singles the ability to meet, review, and date on their own terms, which fits in well with the demographic’s shifting attitudes.

“This younger age group doesn’t focus on parental and societal approval as much to find a mate,” Sumesh said.

Another difference in the younger generation is where the daters live. Many young professionals have left their smaller cities or towns to move to more densely populated urban areas. And while they’re still interested in settling down, they often have less time to go on dates — let alone find love — between their long commutes and late hours at the office.

“Their views on relationships have changed dramatically from just a decade ago,” Sumesh said. “Within a generation, we have seen many differences in how people view relationships and settling down.”

A Unique Platform With Features Aimed at Eastern Daters

Many dating platforms developed in Western countries continue to make their way into the Indian market. But Woo sets itself apart by being an India-based company designing an app with Indian daters in mind.

That focus is apparent in Woo’s workforce. Most employees fit the app’s key demographic — young people ages 25 to 30 — so they can predict and solve problems users might have with the platform.

The Woo team wanted to build an app its members would be proud to use.

“We decided to solve dating problems for the community that was moving to very large cities,” Sumesh said. “If there was an app out there that solved this problem, we’d be happy to use it ourselves.”

The company has produced that platform. In fact, many of Woo’s team members have gotten married after meeting their partners on the app.

And Woo’s features were developed to target its core audience: Busy professionals who lost personal community connections when they moved to larger cities.

One of the features that Sumesh said might be less familiar to daters in other countries is Woo’s use of hashtags. Daters can choose the hashtags that describe them, and then other daters can search for their ideal partners by the characteristics they desire.

“If you want someone working in IT or someone in the medical profession, you can do a hashtag search for those professions, for example,” Sumesh said. “That isn’t something in the UK or US would understand, but that’s the kind of stuff we built out for our India-first approach.”

And that approach seems to resonate. As Woo’s team is out in the community learning what daters want, it continues to make changes and develop features that set the company apart from its competitors — both within the Indian market and outside it.

Another factor that Western-centered dating apps may not keep in mind is that Indian women want to feel comfortable and secure using the platform. Woo has kept women top-of-mind in its design to ensure they feel in control.

“We created an app with a woman-first philosophy to make sure they felt comfortable using it,” Sumesh said.

Many of Woo’s features promote this attitude. For example, female users don’t have to give their full names on the platform while men do. Their names are also shortened into initials to prevent them from being stalked on social media.

Women can also get to know potential partners by using Woo Phone, a female-initiated calling feature within the platform. By using Woo Phone, men can’t get a woman’s contact information before the woman is ready to give it out.

Woo provides women with more options and gives them tools to keep their information safe.

“From the Indian perspective, I don’t think anybody else is solving for that problem,” said Sumesh. “A lot of our features are driven around ensuring that women are taken care of on the app. We listen to women’s feedback and design tools based on that feedback.”

One reason why Woo has been so female-centric since its creation is because women are well-represented on the team. The female-to-male ratio on the Woo team is 11 to 7.

“We have a balanced team. Very democratic. There’s a lot of consensus-driven thinking,” Sumesh said. “They’re very passionate about how the app is being used and finding success.”

Woo Knows How to Keep Up With the Changing Times

As Indian culture steadily moves away from arranged dates and marriages, it will attract more dating apps to an already growing market. And Sumesh believes Woo will continue to stand out from the pack because of its value and focus on what’s important to Eastern singles.

“We know it’s a difficult space, considering international players are coming into India, but we have proven ourselves in the matchmaking category,” said Sumesh.

Woo has learned a considerable amount about its users over the past five years and wants to use that data to help grow the platform. Rather than building on the societal pressure that daters feel to find spouses, Woo wants to make dating more organic.

“We’re focusing on finding ways to improve the user experience beyond the dating aspect itself. It’s our job to invite the right people to the party, but it doesn’t have to lead to marriage.” — Woo CEO and Co-Founder Sumesh Menon

“We’re focusing on finding ways to improve the user experience beyond the dating aspect itself,” said Sumesh. “It’s our job to invite the right people to the party, but it doesn’t have to lead to marriage.”

Sumesh said Woo wants to be a community where users can meet new friends when they move to an unfamiliar place, or even make professional connections.

But, at its heart, Sumesh said Woo demonstrates a shift in the cultural landscape of Indian dating and matchmaking. The autonomy that Woo offers singles would have been unheard of in the country 10 to 15 years ago.

Sumesh said that in the early days of Woo, parents would write to him asking if they could put up their children’s profiles on the app because they still wanted to find spouses for their children.

“We would write back and say, ‘We would appreciate it if your daughter set up her own profile because she can monitor her matches herself,'” said Sumesh. “We are part of the changes happening in Indian society.”