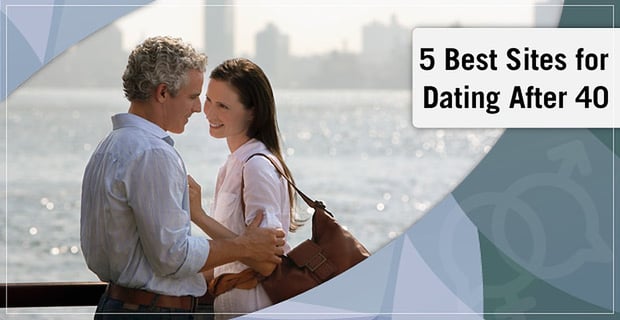 Dating after 40 is complicated because adult singles have fewer options, more responsibilities, and not as much time as they once did.

Approximately, 50% of the people in the U.S. are 40 years old or older, according to the Kaiser Family Foundation. That’s half of the population, but often these men and women feel devalued as they get older, especially in terms of dating.

It’s true that dating in your 40s and beyond can be different, but that doesn’t mean you should give up on it. You just have to find the right mature dating site where you can meet like-minded and like-aged people. That’s what we’re here for. Here are the five top dating sites for singles over 40.

Match isn’t strictly an over-40 dating site, but it’s our go-to option because it has more over-40 singles than any other dating site. More than 42 million people have joined Match since 1995, and more than 39 million people visit the site every month. Its reach is just incredible. Another important fact about Match is that it has had the most successes (dates, relationships, and marriages) of any dating site. If you decide to sign up, which is completely free, you’ll be in good hands.

A lot of dating sites focus on quality over quantity, sending users match after match after match even if they aren’t highly compatible. EliteSingles doesn’t do that. This free dating site will only send you the top matches, and it’s only for commitment-minded, highly educated, mature daters. More than 80% of users have earned a college degree, more than 90% are over 30, and 100% are looking for a relationship.

SilverSingles is a sister site of EliteSingles, so you know it can be trusted and that it’ll work. However, the main difference is SilverSingles caters to men and women who are of a certain age and want to meet people who have the same values, beliefs, and lifestyles as them. You won’t have to pay anything to register, browse profiles, receive matches, and flirt, so go ahead and test the site out for yourself.

Our mature years can be some of the best years of our lives, and OurTime gets that. The site is available for free via desktop computers, Androids, iPhones, or tablets, and free features include viewing profiles and photos, seeing who’s viewed your profile, and sending and receiving flirts and messages, among others. OurTime also provides some online dating safety tips on its homepage to get you off to the best start.

SeniorMatch has an older audience, but that doesn’t mean the matchmaking process isn’t just as easy or fun. All you have to do is provide your name, age, gender, sexual orientation, location, interests, and some other identifiers, and then you’re on your way. You can search on your own as well as receive matches, and you can flirt in a variety of ways. Since 2003, SeniorMatch has attracted over 1 million signups, and it has over 36,000 success stories to its name.

Maybe you’re not in college anymore, maybe you don’t look like you did 10 years ago, maybe you’ve been single for a while, and maybe you are hesitant to try online dating. None of that has to hold you back in the mature dating scene — after all, most of the people in your age range are in the same boat. Dating in your 40s, particularly online dating, is still an enjoyable and worthwhile experience if you have the courage to put yourself out there. The dating sites on this list are good places to start!

How to Succeed On OurTime — 7 Expert Tips

How Successful are the Senior Christian Dating Sites?