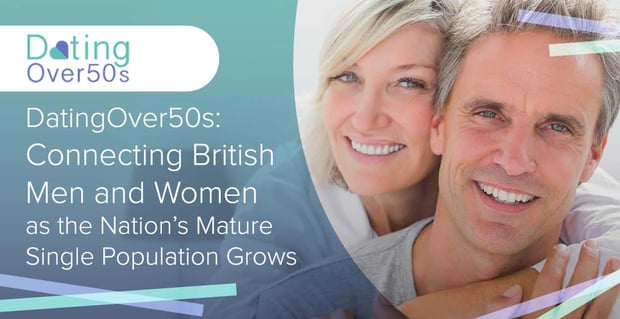 The Short Version: Even as government studies show that the population of singles over 50 in the United Kingdom is rising, it can still be tough for those men and women to find that special someone. DatingOver50s.co.uk is trying to change that. Singles can take advantage of the site’s different membership plans depending on their needs, and the team is looking to the future with a mobile app in development.

According to the United Kingdom’s Office for National Statistics, nearly 13% of people between 50 and 64 living in England and Wales are single and have never been married. The government studied the age group because those are the residents who will soon be receiving a state pension.

Dating Over 50s offers a pressure-free environment in which singles can meet other older daters.

That percentage has increased dramatically since 2002, when just over 6% of the same population was single and had never been married. Many other people in this age group (16%) are also divorced, meaning nearly 30% of U.K. residents between 50 and 64 are single — with many looking for love.

However, that doesn’t mean it’s easy for them to meet. That’s why DatingOver50s.co.uk was launched in 2008. Since then, the dating site has become one of the most popular ways for mature singles to connect in the UK.

A Straightforward Platform That Makes Dating Easy and Fun

One significant problem for mature singles is the challenge of online dating technology. Understanding the nuances of dating in the modern era is tricky enough, so singles over 50 don’t need any further confusion from an online dating platform.

Dating Over 50s has many advantages over mainstream dating sites, including icebreakers.

Dating Over 50s is free to join and easy to start. Once users visit the home page, they’ll immediately see a big blue button that allows them to join the site. From there, they can create a profile for free. Experts recommend that you upload an attractive picture of yourself smiling and looking natural, no fake poses or touched-up photos. Often, people will use an old picture, which can be misleading to other singles. Dating Over 50s suggests users present themselves as they are, and trust that they’ll find someone out there who will love them for that.

Once users write a little something about themselves — including hobbies, values, and what they’re looking for in another person — the fun begins. The next step is to search for other singles nearby. Simon Aldous, Founder of Dating Over 50s, said that approximately 30% to 40% of the singles who use the site live in or near London. He said the site also sees a large number of people from other major cities in the U.K., including Liverpool, Bristol, Redding, and Oxford.

And sometimes relationships through the site don’t start as romances. Many users come to Dating Over 50s to first find friendships, hobbies, or creative outlets. But many good relationships begin as friendships — so users can have fun and relax knowing that there’s no pressure to jump in too quickly.

The site offers two different membership tiers, depending on user needs. The first is the basic plan that allows users to create a profile with a clear “About You” section and add a couple of photos.

Research shows that it’s a good idea to add more than one current photo to a profile. Along with a smiling headshot (without sunglasses), daters should consider adding a picture that shows their full body and one that lets others know a little more about their interests.

A basic membership allows users to browse through the profiles of other singles and send icebreaker messages. These messages offer a simple way to express interest in someone and find out if they are interested, too.

Singles can join Dating Over 50s for free and start finding matches right away.

To upgrade, basic members can create a full membership, which comes with many added benefits. Most importantly, full membership allows you to chat with other mature singles who interest you — for new friendships and potential dates.

Also, full members can see who has checked out their profile and even share their thoughts and feelings with the community at large through diary entries. Those entries can help bring attention to the user’s profile as well as help others get to know them better.

Because the site has such a long history of success, its members rely on it for connections that otherwise may prove difficult in today’s world. With seemingly fewer people feeling comfortable striking up conversations with interesting and attractive strangers in person, mature daters need a place to meet comfortably.

As the population of older singles grows in the U.K., Dating Over 50s will continue to be an essential tool for them to find friends and create meaningful relationships. While Dating Over 50s is one of the most established niche dating sites in the region, the team isn’t going to rest on its laurels.

Simon said they’re currently working on creating a mobile app that will complement the website because more people in the platform’s targeted demographic are using smartphones everywhere they go.

Dating Over 50s can still be used on a mobile device, but the app will make it even easier for users to navigate to the platform, see their matches, and exchange messages. It’s a big project, so Simon said he expects it to take another year or year and a half. However, he said the main goal will always be to help people find companionship.