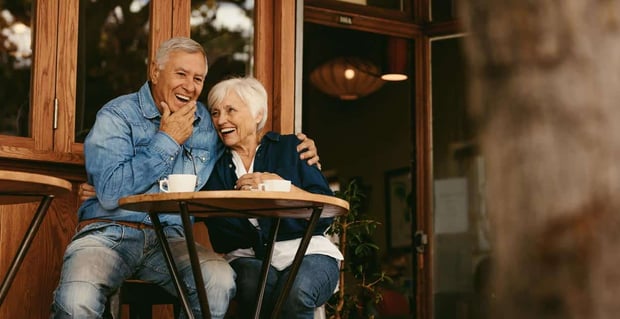 How to Ask a Senior Man Out (In Person, Online, Through Text)

If you’re a senior single woman looking to date more and maybe even find love, sometimes you’ll have to ask the man out. That’s just how dating is in the 21st century.

I’m still a tad old-fashioned, and I recommend the man do the initial part of the pursuing. However, that doesn’t mean a senior lady has to be passive the whole time. Here are a number of tips if you’re looking for ways to ask a senior man out.

1. In Person: Make Eye Contact, and Ask Him to Go to an Event Coming Up in Town

If you two have met and are already acquainted in real life, when you see each other next, you can move the conversation from general talk to an event coming up or an activity you want to participate in with him. Maybe say something like: “Did you see that there’s a senior dance class coming up Saturday at the YMCA? Would you like to go with me as my date?”

It doesn’t have to be a dance class — it can be a concert, a pickleball tournament, a show at the local theater, or anything else you can think of. Google “senior events in [your town]” to get some ideas.

Also, you want to make sure you use the word date so he doesn’t think you’re only interested in being friends. If he’s interested in you, romantically, he’ll probably enthusiastically accept your invitation.

It’s easier to say something like “There’s a festival in town coming up. Would you like to go with me?” than to randomly ask someone out.

If he’s not that into you or isn’t ready to date again after the death of his wife or a divorce, but he wants companionship, he may still accept and turn it around by saying: “That sounds like fun! It’s still a little early for me to start dating again. How about we go as friends? I’ll buy the ice cream afterward.”

If that happens, accept his kind gesture and know where you stand. It’s best to still be active and go out on the town than to sit at home by yourself.

Keep things light, and you can still let him take over some of the traditional male tasks like picking you up. Say something like this to him: “Of course, we can go as friends. How about you pick me up at 6? I’m looking forward to this!”

2. Online: Don’t Message for Too Long, and Be Casual About It

With so many senior singles meeting on dating sites and apps, I get a lot of women asking me how to ask men out on these platforms. It’s very similar to how you’d ask a man out in person. However, you’ll be doing so via messages or emails.

Around the fifth message exchange or so, if the man has been messaging with you this long, he’s definitely interested in meeting you.

Don’t get stuck in messaging limbo — ask him out sooner rather than later.

Since body language cues are lost in the digital realm, some men over 50 often wonder if the women they’re conversing with are really interested. You can show him you’re interested with a very casual suggestion for a date.

Example #1: “All this messaging has been great! Do you think it’s time we met in person now?”

Example #2: “You’re so interesting to talk to! How about we meet for that coffee date next week? What do you think?”

3. Phone: Ask for a Coffee Date, and Bring It Up When You’re Already Talking About Coffee and/or Dating

If the two of you are chatting by phone, you may want to get things moving a bit faster and into real life. I always tell my coaching clients to ask for a coffee date because it’s low-key, so it’s perfect for women over 50 to suggest.

You could even plan out what you want to say before you get on your next phone call with him or before you reply to his last text. However, I recommend that you keep it feminine. We all know how to be assertive and business-like in our careers, but, in terms of romance, you want to tone down that energy.

Try saying something like: “You’re such an interesting man, and I really enjoy talking with you. Were you thinking this upcoming week is the right time to go ahead and meet for a coffee?”

If he says yes, you can then put the ball back in his court by cheekily saying: “Great! Where did you want to take me? :)”

And then be silent. He was probably already thinking about asking you out for a date, so it’s OK to initiate and then wait for him to actually do the planning.

Lead the conversation toward your dating lives, and then tell him you’re interested in meeting up.

You don’t have to be completely passive, but do throw out some feminine energy by waiting for him to make some of the moves. This will help foster romance and make sure you stay out of the friend zone.

Also, if you can, ask him out for the date while the two of you are already in the midst of a phone or text conversation. This is especially true if you’re already talking about coffee or your dating lives. Then it’s just the natural course of things for the next step in the conversation to be arranging to meet for a first date.

Were you to just suddenly call or shoot out a text asking him out, it can come across as aggressive. Instead, as a senior lady, you want your interest to flow gracefully and with poise.

Long gone are the days when women had to sit around hoping men would ask them out for dates. As a modern woman, you can ask a senior man out yourself.

Whether you do that in person, on a senior dating site or app, over the phone, or through text is totally up to you. No matter the medium you choose, I promise you’ll feel empowered, and you’ll see how appreciative men are when they’re pursued a bit. Studies show many men like it when women make a move.

The main thing is to put yourself out there in a variety of ways and focus on having fun and meeting new people. That’s how you’ll improve your love life. Good luck!