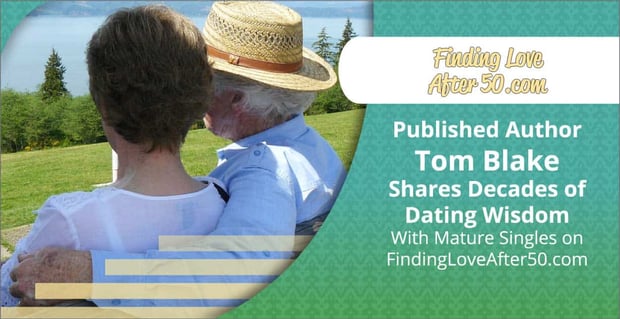 The Short Version: In the 1990s, Tom Blake made a splash in the senior dating scene by describing his perspective as a single man over 50. He has now written over 3,800 columns, articles, and newsletters about the challenges faced by daters over 50 and the opportunities available to them to find love. Today, FindingLoveAfter50.com shares Tom’s insights in a weekly e-newsletter geared toward singles in their 50s, 60s, 70s, 80s, and 90s.

Tom Blake met Greta in June 1998, and they’ve been inseparable ever since. They’ve lived together for 18 years and are devoted to one another — but they aren’t married. Both Tom and Greta have been divorced multiple times, so they’ve decided to stay together without tying the knot.

For the couple, 2018 was a busy and fulfilling year. For each of the 21 years Tom and Greta have been together, the couple has taken at least one fun trip out of the country. When they entered their late-70s, Tom and Greta decided to step up their travels while they have the chance, and they took an 82-day cruise through Asia in 2018. “It was the highlight of our year,” Tom said.

Tom Blake and his partner Greta at the Great Wall of China in October 2018.

Tom described 2018 as “interesting, busy, and rewarding.” It was a year of adventure and growth, and it gave him time to reflect on his dating experiences, his writing career, and his goals for the future.

While he travels the world with his partner Greta, Tom manages to keep up with his bi-weekly newspaper columns in the nine newspapers that employ him. And he writes a weekly e-newsletter for his loyal subscribers on FindingLoveAfter50.com. He also sold the home in northern California where his mother had resided when she was living, and purchased a replacement home in Palm Springs, which is only a two-hour drive from where he and Greta live. According to Tom, “2018 was very busy, which is what Greta and I want in our lives.”

As a published author and syndicated columnist, Tom has spent his career writing informative and engaging columns, books, and newsletters about the topics that impact his life as a senior dater. He addressed the challenges of meeting someone new when he was a 50-something single, and he has outlined the successful strategies he has used to cultivate a relationship in his golden years.

FindingLoveAfter50.com offers a comprehensive informational resource for seniors wondering how to navigate a rapidly changing dating scene. Tom lends his support to singles over 50 and lets them know their best days may still be ahead of them.

Tom began writing about dating topics about 25 years ago after his divorce. He was 53, single, and discovering just how hard it was for a bachelor at that age to meet a mature woman.

He wrote about his hopes and his frustrations in many personal columns, and his sincerity attracted divorced, widowed, and never-married singles going through similar challenges. Many of his readers were women interested in hearing a man’s perspective on senior dating.

“At that time, the only people writing about mid-life dating were women,” he told us. “Women readers wanted to hear what a man had to say about the situation.”

Tom pointed out the differences between how men and women approach dating, and he started an animated discussion about salient dating topics on things like who should pay for a date and how long you should wait before becoming intimate with a partner.

Sometimes Tom has taken a stance that startled women, and his opinions have challenged them to reconsider their assumptions about the dating world. Whether he’s offering relationship advice or criticizing dating norms, he has never shied away from difficult — even controversial — subjects.

“My male point of view built a large female following because of the controversy it created,” he said. “It was information that often boiled their blood, but they loved to read and react to it.”

Today, Tom has written over 3,800 columns and newsletters aimed at singles over 50. His audience remains solidly female (he told us that about three-quarters of his readers are women), and he continues working to bridge the divide between genders. His goal is to inform senior daters so they can cope with being single again.

Over the years, Tom has followed dating trends and provided insights to help readers, especially female readers, better understand what the person on the other side of the conversation is thinking and feeling. His no-cost e-newsletter is published each week; he has over 2,500 e-newsletter subscribers who read his columns and email him with questions.

Tom said most of the questions revolve around where to meet romantic partners and how to use online dating as a senior, but sometimes he hears from someone in a more complicated and painful dating situation. In those situations, Tom is available for paid consulting for 30-minute and one-hour sessions via his website. He has heard from singles who are fearful of putting themselves out there, and he has heard from married couples who are on the brink of divorce.

“Opportunities seldom come alone. When they do, singles need to seize them, even if they’re shy.” — Tom Blake

Tom answers every email he receives from readers and gives tailored advice to help them heal their hearts and move forward. Sometimes Tom asks for permission to share the gist of those email conversations in a new column or newsletter, so that he can reach out to others dealing with similar issues.

“In that way, they will receive the benefit of input from newspaper readers and 2,500 e-Newsletter subscribers,” he said. “Of course, if they want to remain anonymous or not disclose in what city or state they live, I honor that.”

The senior population has risen sharply in the U.S. as those in the baby boomer generation reach their late 50s and 60s. The aging population has created a ripple effect in the workforce, in family structures, and in the dating scene.

People are living longer now, and they’re divorcing at a higher rate once they reach their 50s, 60s, and 70s. The divorce rate among adults over 50 has nearly doubled in the last 25 years, a phenomenon known as Grey Divorce.

As a result, the dating scene has become flooded with senior singles who haven’t dated in the age of technology and don’t know where to get started. Fortunately, Tom Blake’s information-rich columns equip seniors to start over and attract partners online and offline.

Tom can understand what it’s like for senior singles because he has been in their shoes. After his divorce, he had to adapt to a new way of being single and searching for a partner. He found his chance at lasting love at a deli in Dana Point, California, and now he helps others create their own love stories.

Tom offers free senior dating advice in his complimentary e-newsletter to get single men and women started on the right foot. He understands the difficulties faced by mature daters, and he offers positive solutions and encouragement to motivate them to create dating profiles, go out on dates, and find love again.

“My biggest goal in 2019 is to strive to provide single seniors with hope and encouragement to get off the couch and out of the house and involved in activities they enjoy,” Tom said. “Hopefully, 2019 will be another blessed year.”

Tom Blake Has Big Plans on the Horizons

As singles grow older, they often face different dating challenges than they did when they were younger. Maybe they have children. Maybe they’re grieving the loss of a significant other. Or maybe they’re just not as confident in their flirting skills as they once were. Columnist Tom Blake has spent decades addressing these issues and shining a light on an often-marginalized dating demographic: senior singles.

Tom writes the Finding Love After 50 newsletter to inspire his readers to redefine what it means to be in their golden years. His practical guidance and pithy insights have made a difference in how readers approach senior dating.

In 2019, Tom said he expects his readership to grow as more baby boomers enter the dating scene, and he also plans to take a romantic cruise with Greta to visit Ireland, Iceland, and Greenland.

“The impact I want to have on senior dating is to bring together seniors to form romantic connections,” Tom said. “There is nothing more rewarding for me than to see a couple holding hands walking in our local harbor, or at Costco, or at the movies, or anywhere, and have them say, ‘You are the reason we are together.’ Hearing those words is the frosting on the cake for me.”