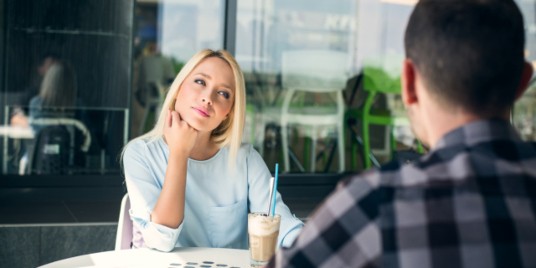 70% of Americans Have Kissed on the First Date

When you’re on a first date that’s going well, do you lean in for the kiss? Or do you prefer to wait?

In a sweeping study conducted by DatingAdvice.com, more than two-thirds of Americans said they’ve kissed on a first date, with men 15 percent more likely to gain that kiss than women.

Out of more than a thousand respondents, gay men and women ranked the highest. Eight out of 10 admitted they’ve smooched on the first date – 10 percent more than their heterosexual counterparts.

“Two-thirds of Americans have kissed on a

Dr. Wendy Walsh, clinical psychologist and DatingAdvice.com expert, said while other cultures may interpret a kiss as a greeting or other general form of affection, Americans usually see it as a sign of sexual attraction.

“Plenty of dating couples are known to do a serious tongue waltz before they’ve even seen each other’s apartments,” she said.

The results show location and ethnicity may also be a factor, as 76 percent of respondents in the Northeast said they’ve kissed on a first date compared to just 66 percent of Midwesterners.

Dr. Walsh said the study suggests Americans have a liberal attitude toward sexual situations and behaviors and may even feel pressured to become physically intimate before emotionally intimate.

“In our modern American culture, a kiss on the lips between two people on a romantic date is most certainly a sign of sexual attraction by at least one of the kissing partners, usually the one who makes the first move,” she said. “The other partner may comply in order not to offend their date, even though they have no plans to see the person again.”

The Breakdown: Americans Who’ve Kissed on the First Date

1 in 3 Americans Have Never Kissed on a First Date

Study: Divorcees 22% More Likely to Kiss on a First Date