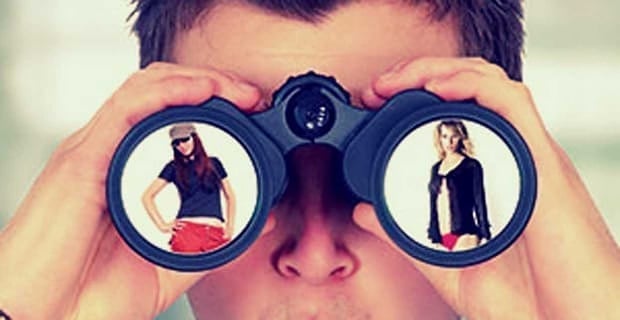 A Man’s Gaze Determines How Sexually Adventurous He Is

Psychologists have long considered studying the eyes as a way of gauging attraction, and a new study has found a man’s gaze can reflect his underlying sexual motivation.

Researcher Ken Guo, a psychologist at the University of Lincoln in the United Kingdom, decided to delve further into the visual nature of attraction. People’s eyes automatically dilate during arousal or when looking at someone they find attractive, and the fact eye movements are spontaneous, unconscious and uninhibited means they produce considerably more honest and trustworthy data than written, spoken or otherwise self-reported responses.

Researchers showed 30 men and 30 women, ages 18 to 25, pictures of an assortment of fully clothed children and adults in their early 20s, 30s and 40s.

looking at the breasts and hips of the young women.”

Guo asked participants to look at the pictures as they naturally would while a device tracked their eye movements. In addition, participants also filled out a survey identifying their levels of sexual inhibition.

Guo found men who were sexually uninhibited spent more time looking at the breasts and hips of the young women in the pictures than men who were more sexually inhibited, indicating you can determine, to a certain degree, how sexually adventurous a man is by how long he holds his gaze on a woman’s midsection.

By contrast, these men didn’t spend any time looking at the midsection of children or women who were older, further indicating the connection between eye movement and attraction.

Physical Attractiveness More Important Than Men and Women Let On