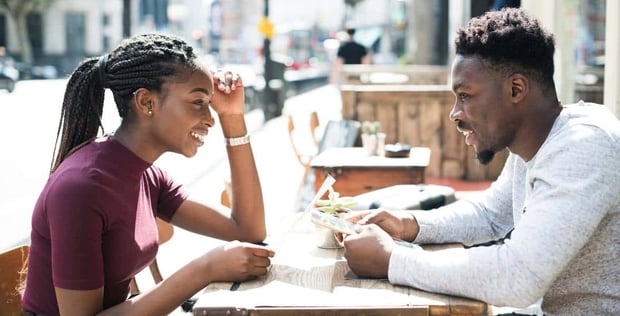 From skydiving to singing karaoke, the first date has evolved drastically in America.

However, it looks like the majority of Americans still prefer to go old-school with their dating.

According to a study conducted by DatingAdvice.com, 49% of Americans would rather go to dinner for a first date than meet for coffee or drinks.

Among the most likely demographics to choose dinner was African-Americans and middle-income wage earners.

At 51%, going to dinner for a first date seemed most popular among younger Americans versus 43% of Americans aged 54 to 64.

“Forty-nine percent of Americans would

rather go to dinner for a first date.”

“They plug you in for a longer period of time. If you feel potential with your date, this is a good thing,” she said. “You have to eat anyway and having company and a good meal makes it more enjoyable. If you’re down to show off your old-school generosity toward your date, this is easy decision for you.”

Region also played a large role in the results.

Southerners were the ones most in favor of tradition, with more than half supporting dinner. The least likely to agree were those living in the Northeast, where only 43% selected dinner with a date.

Gay Americans and divorcees were some of the least likely groups to answer in the affirmative.

One in two straight respondents said they would rather go to dinner with a first date compared to one in three of their gay counterparts.

Half of singles who have never been married chose dinner, but just 42% of divorced men and women did.

The Breakdown: Americans Who Prefer Having Dinner for a First Date