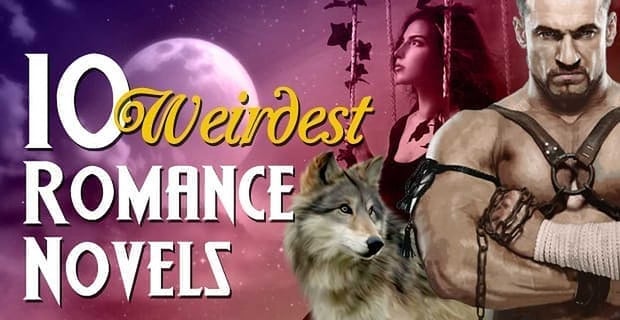 Everyone knows Judith McNaught, Nora Roberts and Julie Garwood — these authors are famous for their ability to write a romance novels.

Unfortunately the authors featured here are a little less celebrated for their talents (what a shame!), but maybe you’ll find something that peaks your interest in this list of the weirdest romance novels ever.

An alien fugitive takes hiding within the home of a suburban soccer mom, who is currently being hunted down by the mob.

It’s the perfect novel for when you can’t decide on what kind of plot elements you want, so you decide to have all of them at once.

The novel follows Harold Jacobs, who is apparently very embarrassed about his “enormous package,” as he tries to move past his insecurity to hold on to his relationship.

It’s one thing to make a romance novel fantastical, but this? This is absurd — no man has ever felt this way.

The plot doesn’t get too weird, but this is one of many NASCAR-themed romance novels. Did we miss when race cars turned into a romance genre?

7. “The Cowboy and the Cossack”

This book tells the story of Alexandra, the new leader of a Russian tribe that lacks many men, and Nate, a rancher-turned-agent who is after the nuclear coding device she has.

It’s just right for when you can’t decide between a Western and a Russian tribal. (Is that a thing?)

The title says it all, but that doesn’t mean we understand it. We’re definitely good with a sexy ranch owner. Throw a pregnant lover in there and it’s kind of weird. However, we can accept it.

But putting Christmas in there, too? That is just too far for us to go for one plot line.

5. “Escaping the Milking Machines: An Impregnation and Lactation Story”

Laura and Jerome can’t be together because they live in a dystopia, where Laura is forced to spend her life as a “pregnant cow.” It’s an interesting concept.

But she also finds the milking machines arousing and is going to escape imprisonment through a war zone. Um, what?

Jonah, an angel with a broken wing, finds solace with Anna, a mermaid with a dark history. We’re not sure how it all works out, if only because she has a tail.

Henry, a man in a loveless marriage who often uses hookers, is in a car accident that ends the life of his body, though his mind ends up in the mind of his step-daughter’s body.

The description inquires to his step-daughter’s mind, but we really would rather not find out.

An outspoken American woman is stolen to be the bride of not one shape-shifting Moon Ghost Jaguar, but two.

This is a part of the Freakn’ Shifters series — after all, we wouldn’t expect you to have satiated your desire for all that is freakn’ weird with just one book.

1. “Taken by the Pterodactyl”

Dianne is taken by a pterodactyl, and apparently it “might have another, more deviant use for the young virgin” than eating her.

Even 4.3-star reviews are not enough to convince us to try this dinosaur erotica — we’re still waiting for our brains to stop exploding.