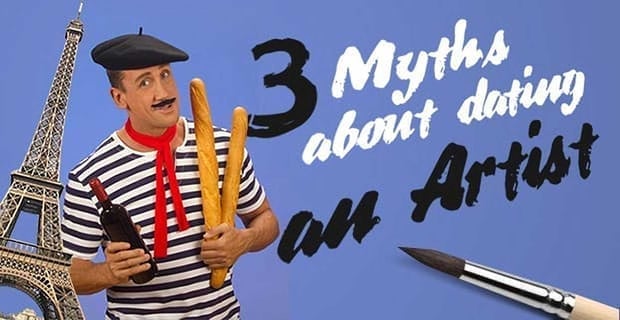 3 Myths About Dating an Artist

The starving artist, the pretentious artist, the sensitive artist — there are a lot of stereotypes out there about artists, but it’s not just their careers they have to defend. They also have to defend who they are as daters.

Want to know what it’s really like to date an artist? Well, look no further than this article.

I spoke with Cory Huff, founder of TheAbundantArtist.com, and Annush MacLeod, the wife of Miami cartoonist Hugh MacLeod, of GapingVoid.com, to set the record straight.

Yes, while some artists are sensitive types or like to keep to themselves, MacLeod, who’s been with her husband for four years, said people often mistake this as being self-involved or emo.

“You can’t have a perspective of the world without being involved with the outside world,” she said.

According to Huff, 20,000 people graduate from art school every year, and having been an actor since he was a kid, he knows firsthand that artists come in all different shapes, sizes and personalities — some even come as cowboys.

“The variety of artists is just as much as the variety of people,” said Huff, who’s been married to another actress for 12 years. “You can’t just take those 20,000 people and put them in a box.”

Myth #2: Artists only care about their work

When you have a big goal to accomplish at work, don’t you throw yourself into it to get it done? Well, so do artists — just not in the extreme way people think.

“Professional artists are like professionals in any other field, and they deserve to be taken seriously,” Huff said. “The artist looks at their art as their life. I think artists are still responsible for taking care of their relationships, but people should understand art is just as serious of a career as any other career.”

MacLeod added to that, stating that just because some artists go on binges where they spend days immersed in their work, this doesn’t mean they aren’t committed to their personal relationships as well.

“In my experience, artists are extremely committed to what keeps them interested in every aspect of life, including their art,” she said. “That spills over to relationships.”

Ever heard of Andy Warhol? Well, did you know his estate was valued at $20 million at the time of his death? His net worth is now $220 million. What about Annie Leibovitz? According to CelebrityNetworth.com, she’s worth $20 million.

Believe it or not, people can actually make a living off their art and don’t just rely on the love of their work to pay the bills.

So think you have what it takes to date an artist? Make sure you follow these do’s and don’ts:

The don’ts of dating an artist:

The do’s of dating an artist:

Remember, the best part about artists is they keep you on your toes. While one night you might attend a fancy gallery opening, the next night you’ll be at a warehouse in the middle of nowhere painting pictures of nude models — just go with it.

“I think the best thing you can do, if you’re going to be in a relationship with somebody who’s an artist, is to just roll with it, roll with the crazy,” Huff said.