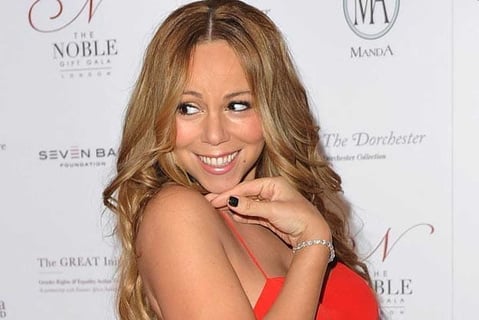 Queen bee, diva extraordinaire and ruler of all peasants is breaking the Internet as we speak. And no, I’m not talking about Kim Kardashian and her nudes.

Mariah Carey is in breaking news everywhere for her recent venture into the online dating world. She is allegedly single and ready to mingle with her new profile on Match.com. As if her split from Nick Cannon in 2014 wasn’t shocking enough, this is sure to stir the pot even more.

Her profile doesn’t say much about her that we don’t already know, but it does tell us she doesn’t mind maintaining her cougar status, likes to cook and watch movies and is looking for a man close to New York who will be her “infinity.” This is no joke considering she even tweeted about it.

Here are some reasons we think this celebrity decided to jump into the real world and get back in the dating game using Match.com:

It’s definitely no coincidence that Carey just released her new song and music video “Infinity” just as she created a Match.com profile. She’s been in the business for quite some time now, so it shouldn’t come as a surprise that she would use every platform possible to get her video out and circulating in the market.

She’s a savvy businesswoman, so naturally she embedded the video in her profile and tweeted about it saying, “Did you see my new #Infinity video? Check it out and my @Match profile.”

On top of that, the video features plenty of product placement with bottles of perfume and recognizable stars like model Tyson Beckford and “Empire” star Jussie Smollett.

It’s still up in the air whether Carey is getting paid by Match.com for the promotion, but we can assume the truth. Nothing gets past us, Mariah.

2. She Knows What She Wants, and She Wants It Now

Carey is the type of person who will make sure she always gets her way no matter what. She even stormed out of President Obama’s inauguration ceremony in 2009 because she was “furious” she wasn’t seated at the First Couple’s table. You best believe if she wants a man, she will get one.

As a divorced 45-year-old single mom, she is ready to settle down again and find her “infinity,” as she says in her Match.com profile. There’s no way Carey has the time or the patience to go man hunting, so what better way to speed up the process than online dating?

She obviously wants to multitask and promote her new song while she also searches for a soulmate, and there’s no chance Match.com would punish her for putting the video in her dating profile.

Because she has quite a reputation for being a diva, making ridiculous requests and bad-mouthing people in public when she shouldn’t, Carey has some making up to do. Not to mention her divorce causes people to assume she is lonely, emotional and vulnerable.

Putting herself on the market using an online dating site where she can be matched with real people makes her look more down-to-earth and less of a stuck-up celeb. Not to mention it gives the outside world the impression she is moving on just fine from ex-husband Nick Cannon.

She is also using the music video to wish other single women good luck in the search for love, and for once it seems she has some compassion in her.

In a statement to Us Weekly, she said, “I hope every woman who is single and listens to this song goes out and finds her infinity. Whether on Match or the traditional way.”

Maybe this is a new era for Ms. Carey — just in time for a new match and a new “infinity.” Check out the video yourself to see what you think: