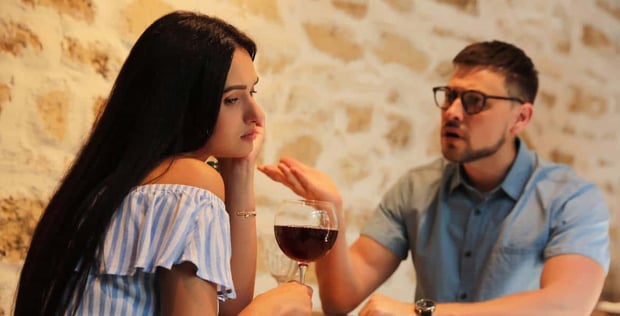 By now, everyone has probably seen the Nice Guys of OkCupid. If you haven’t, here’s the premise:

Someone thought it would be funny to post pictures of unattractive, socially awkward men from OkCupid, along with painful clips from their profiles talking about how they are “nice guys.”

While I can’t help but wonder what would happen if the gender roles were reversed here, it did get me thinking about “nice guys.”

Let’s paint a little picture of the Nice Guy:

The Nice Guy is a girl’s best friend. He’s always there when she has problems.

In fact, he often volunteers his services even when they aren’t wanted. He fancies himself a lady’s closest confidant, yet he rages at being in the “friend zone.”

This isn’t only limited to the guy who longs for a relationship with his best friend and wants to know how he can make it happen.

This is also the type of guy who only talks to women so he can get laid.

First of all, talking about what a “nice guy” you are is generally a pretty clear sign you aren’t, which I think is the point of the site in the first place.

It’s like guys who are always going on about how “honest” they are. It either means they’re proud of acting like assholes all the time or they’re pathological liars.

Similarly, the “nice guy” is anything but. He’s got an agenda (usually a pretty selfish one), and he disguises it underneath the cloak of being a “nice guy.”

At The Art of Charm, we’re not the least bit opposed to agendas, even ones that might be a little “selfish.” But we do urge men to be honest and above board about their intentions at all times.

“People tend to be attracted to honesty,

All of this avoids a pretty important point:

No one ever got laid by being a “nice guy.”

The Nice Guys of OkCupid fail at creating rapport and sexual tension. They then reach the passive-aggressive conclusion women don’t like them because they are “too nice.”

These are the guys who honestly believe women look for assholes. Every man with a lick of social awareness knows on some level this isn’t true.

However, at least they know the type of women they want to date won’t be into dating assholes.

What do women really want?

As there are nearly 3.5 billion women on the planet and I’ve only met a fraction of them, it’s hard to say.

But people in general tend to be attracted to honesty, purpose of action and high social value.

You can bet the most socially successful people in the world didn’t get there by mistreating others. Nor did they get there through false, passive-aggressive “niceness,” which ultimately was nothing more than a self-serving power play.

You want to be nice. You also want to be independent and, above all, genuine.

The sad singles also need to have themselves validated from external sources, usually women. And most women can smell the desperation on them.

The first thing you need to learn is if you aren’t satisfied with yourself as you are, you have to get good at pretending you are while you’re busting your ass to get there for real.

Begging attention off people, especially by trying to make them feel bad when they don’t give it, is just about the worst social strategy going.

Keep in mind that you’re not owed anything from anyone for being nice. The stereotypical “nice guy” often feels entitled to a relationship because of how nice he’s been acting. But if it’s just an act, then it’s not going to win anyone over.

How Online Dating Works for Men