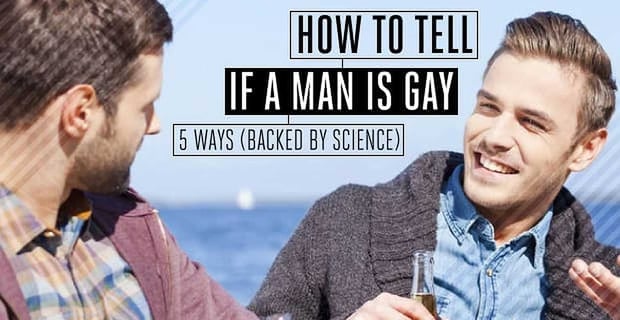 “How do I tell if a man is gay?” It’s a common question I receive from gay men, whether it’s coaching clients or friends, and I sympathize with their struggle. It’s hard enough to ask someone out, but what if you’re not even sure if that person is, well, your type? Then working up the courage to say hello is nearly impossible.

For a guaranteed way to connect with men who you know are gay, visit the 4 best gay dating sites that were chosen by our experts.

Don’t worry, you don’t have to trust in your gaydar alone in the dating scene. Turns out science actually has some answers for us.

There have been a number of scientific research studies conducted that have investigated this very hot topic. Here are some of the findings that speak to how we can decipher an individual’s sexual orientation:

1. Do His Pupils Dilate When He Looks at You?

Look into your crush’s eyes while he’s talking and see what they tell you. Maybe he’s feeling the same way you are!

2. Does He Have a Wide and Short Face?

Researchers from the Center for Theoretical Study at Charles University in Prague and The Academy of Sciences of the Czech Republic indicate that there are some unique differences in the shape of gay versus straight men’s faces.

They purport that gay men in their study showed wider and shorter faces, smaller and shorter noses, and larger, more rounded jaws of a masculine appearance. I know it sounds strange, but the science tells us that sometimes you can judge a book by its cover.

3. What Do His Individual Facial Features Tell You?

Similarly, a University of Washington Study also highlights how sexual orientation can be judged with fair accuracy by particular facial features and configurations.

Rather than merely adoring how cute Mr. Studman is, perhaps really inquisitively studying his facial structure and composition could reveal his true nature.

A study published in the September 2013 Journal of Personality and Social Psychology alleges that gay men tend to walk with a slight “sway” of the hips, while lesbians walk with a back-and-forth motion of their shoulders.

It’s a stereotype, but it’s also a pretty good clue. If you see a guy swinging his hips as he walks, then he could be a queer-friendly person to talk to.

5. Is He Left-Handed, or Does His Voice Signal Anything to You?

A variety of researchers named in this article report the following findings about a confirmation of a gay sexual orientation:

If you’re going to get your answer about your office mate’s sexual orientation, you’re going to have to get creative about scanning his hairline, intimately studying his hands, and finding a way to reach into his pants to support your assumptions about where he potentially lies on the Kinsey Scale.

What Are Your Thoughts?

Can we argue with science? Are they truly substantiated, or are they biased? Do they feed into stereotypes or provide some additional clues into helping to clarify this perplexity? How is your “gaydar” wired in being able to identify whether someone is gay and a possible dating prospect?

Please share your opinions so we can generate some helpful dialogue about this important issue!

Can You Make Finding Love a New Year’s Resolution?

5 Reasons Why You Stay Single on Valentine’s Day

Make the Yuletide Gay: 5 Dating Tips During the Holidays