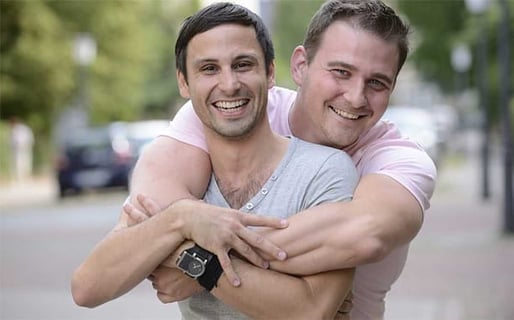 When to Start Getting More Intimate

When do you have sex for the first time with a new partner? This is a question that comes up, please excuse the pun, all so frequently.

You’ve met a guy, gotten to know each other, chatted on the phone, exchanged emails, and perhaps even shared a drink together. You’ve decided to have an official date, so does this date end up with the two of you between the covers?

You do like him and that sexual itch could use a little scratching, so should you sleep with him on the first date?

There is no right or wrong answer.

For some people in the gay world, they don’t exchange pleasantries, or even names, until after they’ve given each other a physical workout.

So what is wrong with doing the wild thing on a first date? Nothing whatsoever. However, you don’t have to if you don’t want to. If you don’t want to be another notch in the bedpost, then don’t. No one can make you go down the physical route.

Yes, we all have a first time, but the tradition of waiting until you’re skipping down the aisle to break out the double duvet doesn’t apply.

The one-night stand scene is still alive and going strong. Some guys prefer to have a revolving door to their bedroom. But the danger is that you may just be one of many, and if a casual, disposable encounter isn’t what you’re looking for, then immediately jumping into bed may not be for you.

The common phrase is “try before you buy.” The argument to counter this is that the first time in bed together is a period of exploration, about appreciating each other, and enjoying the feeling of something unique.

Yes, we all love wild, frantic sex, but mutual (and self) respect is also extremely high up on the list. It all depends on what you are looking for. Be honest with yourself and your date.

I am not telling you to drag him to the jewelry store to try on engagement rings before you allow him the key to your chastity belt. If you want to build up something more, and you feel that first-night bedroom antics will cheapen things, then it’s perfectly reasonable to hold out.

“Being kept in a holding pattern

for too long gets boring.”

Does holding out make him lose interest?

It depends on how long you are planning to wait. Until your mortgage is paid off? Or until you’ve managed to meet every single member of his family to see if he comes from good stock?

In that case, he will almost definitely lose interest. However, if you are talking two or three dates, then you are probably safe, and if he does wander, then he’s not a worthwhile candidate anyway.

In my experience, an acceptable courting period is two to three dates. If you let it go past five, you are in danger of becoming “friends.” Two or three dates allows you to get to know a little more about each other and you get the opportunity to be introduced to many aspects of his personality (and him to yours).

But maybe the ball (or, ahem, balls) is on the other foot and you are wanting to get physical with a guy. You’ve done the wining and dining and had a bit of a kiss and a cuddle, but nothing has been offered below the waist.

This guy is really nice, you like his company, and he seems to like yours. You’ve been gentlemanly, smiled politely at unfunny jokes, been considerate in the choice of restaurants, and you seem to connect.  You call him and he answers most of the time, but there doesn’t seem to be a mutual chase going on.

What’s happening here? Is he being coy and shy?  Probably not. This sounds as though he’s got a few guys on the go and he’s making up his mind. After four or five dates and you’re not getting any indication of bedroom action on the horizon, then it’s time to make dates with other guys.

If he picks up the chase, you can review things again, but it’s time to invest your time, effort and energy into doing something where you can move forward. Being kept in a holding pattern for too long gets boring, and after a while, you’ll run out of fuel, crashing and burning in process. Find another landing strip!

10 Keys to Boosting Your “Sexiness Factor” in the Gay Dating World: Part 2

What to Do When You’re Feeling Pressured to Have Sex

Are You Having Textual Intercourse?