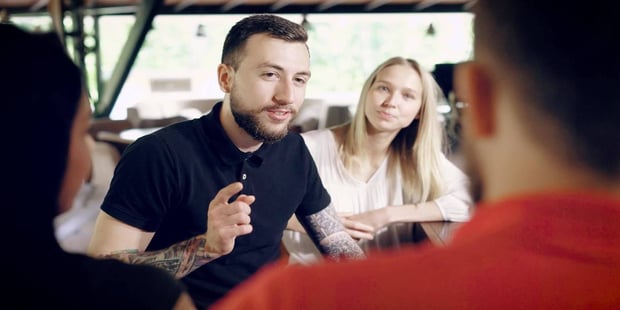 Dating Reality Check: You Are Not Front Page News!

Here is a quick mindset tip for all of you who share this particular issue, and I’m going to demonstrate it with an actual interaction I had with a client.

“Did you see me on the front page of the Los Angeles Times today? If you didn’t, too bad – you really would have been amazed at the article.

There was a big picture of me on the front page, and then there was this article about how I had approached some woman in the Coffee Bean and totally got rejected.

On the front page! It’s unbelievable.

Then there was that full page picture in that annoying supermarket flyer you get every week which showed me getting rejected in aisle 7 of the Pic ‘N Save.

Wow, I can’t believe they actually took a picture of THAT rejection!”

“All right, it’s funny when you say it like that and I hear what you are saying. But it’s kind of awkward if you run into them again or the people that were around, you know?”

“They are not going to remember you

got the heave-ho next to the salad bar.”

“No, that’s your mindset. You’re NOT front page news. Nobody cares and no one even noticed.

Like the guy next to us in Whole Foods just now? He knew I was flirting with the woman in front of me and he didn’t care what happened with her and I.

He’s not going to go back to the office and say, ‘So, you know that tall guy who is always in Whole Foods ordering takeout? Aw man, he got rejected so bad today by this woman!’

What that guy would probably really be thinking is, ‘Hey, at least that guy had the balls to talk to her.’

Then, in five minutes, he’ll forget all about it.

People are caught up in their own lives, so they are not going to remember you got the heave-ho next to the salad bar.”

People get rejected all the time.

When you go out at night, how many guys do you see get flamed?

So you need to embrace this whole mindset about rejection. Remember your rejections are never going to be front page news!

Stop Obsessing About Yourself and Start Listening

How to Choose Between Two Women: An Expert’s Top 7 Tips