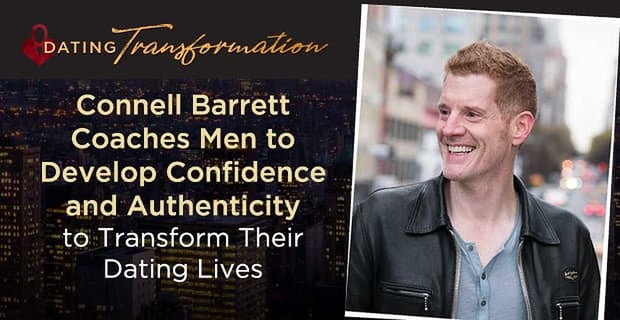 The Short Version: At age 35, after having bad luck with women all his life, Connell Barrett set out to find a way to make dating easier. After completing many courses on strategies to meet women, he found it was his mindset that was keeping him from sharing his authentic self with them. So Connell transformed his own life and then began coaching other men to do the same through his website, DatingTransformation.com. Although he has limited availability for one-on-one coaching, Connell offers free resources on his website to help any man who is open to changing his perspective.

Four words will easily dash any man’s dating hopes: Let’s just be friends. The Friend Zone is where Connell Barrett, Founder of Dating Transformation, often found himself after meeting interesting women. He jokes that he spent so much time in the Friend Zone, he had an apartment there. But fortunately for Connell, and the hundreds of men he’s helped, he didn’t give up and instead decided to upgrade his status with women.

He first tried to crack the code by going straight to the top dating gurus. “I started taking training programs and working with renowned dating coaches,” said Connell. “I was fascinated by the concepts they taught and how I was growing as a person.”

He adopted the techniques that worked for him but ditched the sketchy ones. He took what he learned from the dating gurus and paired it with what he already knew about self-development from authors like Tony Robbins. That combination of techniques formed the foundation for his unique methods.

The result was a self-imposed eviction from the Friend Zone, and a coaching business that has transformed the lives of many clients. He teaches others what he’s learned: that dating isn’t about looks, pickup lines, or status.

Knowing your true self is essential to meeting women.

“They are perceptive, and they can pick up on something that seems off,” said Connell. That feeling can make them uncomfortable and doesn’t reflect well on men who rely on a “fake-it-’til-you-make-it” approach.

When Connell set out to find out how to connect with women, he started by rejecting the sketchy routines and pickup lines. He advocates that men date with integrity. “I’m one of the few coaches who teaches not with the intent of conquering women and getting them into bed, but instead from a desire to connect and collaborate with them.”

Connell takes an immersive approach to help clients learn his methods, and considers himself a self-development coach who specializes in dating. “I’m your wingman; I’m the guide that will take you down the path. Think: Tony Robbins meets dating coach, with a bit of Hitch thrown in,” Connell said.

He is also very clear about the kind of guys he will work with. Connell only takes on about a quarter of those who seek his services, and they must share his respect for women. On nearly every page of his website, he lets prospective clients know that he respects women, and will only work with those who feel the same.

Changing Mindsets One Client At a Time

Connell believes that a large part of finding success in dating is simply changing your mindset.

“A lot of dating coaches teach technique after technique, but I believe that success with dating women is about 80% mindset, and only 20% technique,” said Connell.

While well-timed techniques are useful, eliminating negative thoughts and replacing them with confidence is the best strategy for finding dates.

Many guys have a false narrative inside their head, which manifests itself in thoughts like this:

Connell takes guys through a series of customized drills and role-playing scenarios to rehearse how they will conduct themselves when they approach a woman. He’s developed a series of actions that allow the guys to feel comfortable and confident as their true selves.

One such man was Ken, a 25-year-old man who had never kissed a girl and was stuck in the Friend Zone. After Connell’s coaching, Ken ventured out to meet women. On his third night out, something shifted. He was more confident, stood taller, laughed more, and approached a gorgeous Gwyneth Paltrow look-alike. That night, after drinks and hours of conversation, Ken finally got his first kiss.

Recently a man named Jason in Connell’s Facebook group, which is called How To Be Your Best Self — and Get The Girl, announced that he’d gotten engaged. While every engagement is exciting, this one was especially sweet for Connell because, not long ago, Jason felt like he wasn’t attractive and his prospects were dim. He had some facial scars and was approaching 40. Jason credits the concepts he learned from Dating Transformations for the turnaround.

By changing his mindset about how others viewed him, he was able to be radically authentic — he even took his fiancée fishing on their first date. Now, just a couple months after working with Connell, Jason has set a date to marry his dream girl.

“It feels beyond-words incredible to have that kind of influence on someone,” said Connell.

Improve the Love You Give and Receive With the Dating Manifesto

While not everyone can go to New York City to have Connell act as their wingman, his Dating Transformation Blog has a wealth of information on what he teaches his clients. Whether you’re an older man trying to get a date or want to know how to text a woman so that she’ll respond, the blog offers pages of helpful content for guys who are ready to create their own success stories.

The Dating Authenticity Manifesto shares 15 truths that Connell has learned in the last nine years. These truths come from his personal experience meeting thousands of girls, coaching hundreds of guys, and traveling the world studying the art and psychology of attraction between men and women.

“I don’t think I’ll ever stop doing dating advice. It’s such a powerful way to change a man’s life, and also change a woman’s life when she meets that confident guy.” — Connell Barrett, Founder of Dating Transformation

Guys who sign up for Connell’s email list receive access to a series of three videos, each of which takes a more in-depth look at how to confidently approach women.

In the future, Connell has plans to offer programs so that more men can learn how to be authentic and find compatible partners. He intends to stress the self-development aspect of his work, helping men grow to be the best version of themselves while attaining an exciting dating life. He also wants to add live events to his repertoire.

“I don’t think I’ll ever stop doing dating advice,” said Connell about branching out into more coaching programs and live events. “It’s such a powerful way to change a man’s life, and also change a woman’s life when she meets that confident guy.”