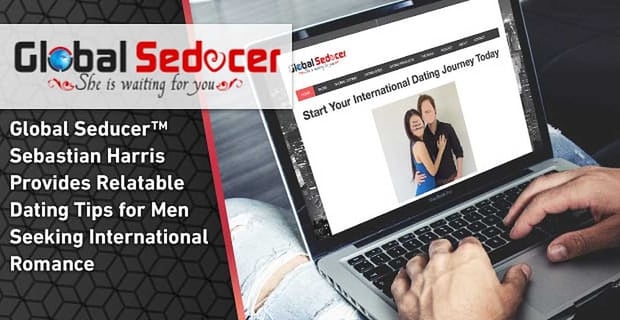 The Short Version:  Sebastian Harris, aka the Global Seducer, hasn’t always felt comfortable talking to women. At one point, he was just plain terrified of opening his heart and being crushed by his crush. However, through years of personal growth, he built up his confidence, recovered from his lowest low, and found happiness in the arms of a loving woman. Now he wants to help others go from self-sabotaging insecurity to romantic bliss. Since 2014, Sebastian has coached single men in one-on-one sessions and shared helpful dating resources on his website. He reviews dating products, writes seduction tips, and shares his experiences via multiple platforms to let single men around the world know that they don’t have to face their dating challenges alone.

Dating coach Sebastian Harris can relate to insecure singles because he was once just like them. He’s an average German guy who has battled insecurities, made dating mistakes, and come out the other side. He doesn’t look like a model. He doesn’t have an extroverted personality. And yet he’s living his best life with a beautiful woman by his side and a flourishing career as an international dating expert.

As a teenager, Global Seducer Sebastian Harris felt insecure about his scarred chest.

How did that come to pass? With a lot of growing pains. Sebastian is very open about his journey from emotional wreck to relationship guru. He was born premature with a congenital heart defect. He underwent three heart surgeries before the age of 13. These surgeries left him scarred and afraid no one would ever find his body attractive.

When he was 17, he worked up the nerve to ask a girl in his class out on a date, and she laughed in his face. “You are disgusting!” she told him. The next year, he wound up in a toxic relationship with someone who didn’t treat him well, but he didn’t think he could do any better.

Finally, after four years of misery, Sebastian decided it was time to change. With the support of several mentors, he began traveling across Southeast Asia, Europe, and South America in search of love, knowledge, and self-improvement. In 2014, he got involved in the dating coaching industry and came into his own as a dating and relationship expert known as the Global Seducer.

“The reason why I have such a strong connection with my readers is because I do not make up a story,” he said. “I don’t have to. I’ve been through a lot, and I only share my experiences.”

Today, Sebastian has coached men from all over the world, primarily in the US and Europe. A solid third of his clients are college-aged men seeking dating advice to help them as they enter some of their most sexually active years. He also sees a fair number of recently divorced men hoping to get back into the dating game but who are feeling apprehensive about how it’s changed over the years.

Another third of Sebastian’s clients are career-driven men in their late 30s to early 40s. These professionals have typically thrived in the business world and fallen short in the romance department. Many of them work in male-dominated professions, including computer programming or engineering, so they don’t have many avenues in which to interact with women day to day.

Sebastian said he enjoys working with more mature, rational, and business-oriented individuals because they’re open to solutions and willing to change their habits. “Their experience in business taught them that coaching can be extremely valuable,” he said. “And the more open you are, the easier it is for me to help you.”

Offering an Honest Look at the Modern Dating Scene

The Global Seducer blog is a comprehensive resource for men looking to date women around the world. Sebastian told us he doesn’t hold anything back from his readers. He details his own personal experiences — including how he lost his virginity — to let readers know that he has gone through many dating challenges in his life, and he understands how difficult it can be for men to approach and woo beautiful women.

“Almost every one of my articles includes some anecdote or experience from my past,” he said. “I do this because I want to show my readers that if I can do it, they can do it, too. I know it sounds like a cliché, but I really mean it.”

In the last few years, Sebastian has written nearly 400 articles about attraction, self-esteem, sex, and other dating-related topics. Global Seducer is a one-man operation, so he doesn’t have a team of people helping him out. It’s all on Sebastian. He does all the writing, editing, and posting himself.

In addition to his numerous writing projects, Sebastian also coaches single men in person and via Skype. The one-on-one sessions motivate single men to make instrumental changes in how they approach women and navigate an ever-changing dating scene.

Sebastian is always looking for ways to share his knowledge and insights with singles. In 2016, he recorded a few podcast episodes, but he didn’t stick with it. Over the years, many guys have sent him messages asking when he’s going to podcast again. Well, that day is fast approaching. Sebastian told us he has bought a high-tech microphone, and he’s determined to start using it on a daily basis.

“I’m taking it seriously. From the moment I will launch my podcast, I will record a new episode every single day,” he said. “No excuses. If you don’t see a new podcast episode from me every 24 hours, you can assume that I’m either on an airplane or in the hospital.”

Finally, Sebastian also offers an array of dating product reviews on his website. These articles recommend resources that cover everything from how to gain confidence for a first date to how to work through a rough patch in a marriage. “What makes these resources so unique is that I personally buy and test every single product I review,” Sebastian said. “I would never publish a review without testing it myself.”

“Rise of the Phoenix” Details a Transformative Dating Journey

Sebastian said the Global Seducer resource he’s most proud of is his new book, “Rise of the Phoenix: How to Get the Hottest Girls in a World That Wants You to Fail.” Released the day before Valentine’s Day in 2018, the self-help book sends a powerful message to singles who long to be the leading man to a leading lady.

“Rise of the Phoenix” details Sebastian’s journey from suicidal loser to legendary seducer.

In his book, Sebastian asserts that anyone can land a dream date as long as they believe in themselves and approach women with sincerity and style. He doesn’t offer pick-up lines or secret formulas — instead, he lays out the fundamentals of romance and what it takes to impress and please a modern woman.

This general seduction guide helps men learn how to attract any woman anywhere. Sebastian wrote every word detailing his own personal experiences, and he enlisted a former client to proofread the manuscript before publication. “I’m not a native speaker,” Sebastian noted, “so I wanted to be sure my grammar was all right.”

While “Rise of the Phoenix” isn’t his first book, it’s the one he’s most proud of because it covers aspects of seduction and dating that resonate with him. He hopes its inspirational message will change the lives of single men feeling down on themselves.

“It contains everything. I finally found my voice and my unique style,” Sebastian said. “The feedback from readers is already overwhelmingly positive. I can’t wait to see how it does. It’s my baby.”

What Clients Say About the World-Class Dating Expert

Sebastian’s dating tips often yield fast results for single men. You can read through dozens of thankful messages and testimonials on his success stories page. He lets potential clients know they can trust him with their hearts because others have, and it’s worked out well for them. “Thank you, Sebastian,” wrote a reader named Douglas in an email. “Thanks to you, I met the woman of my dreams.”

“Sebastian Harris is one of the few dating coaches who understands the dynamics between men and women,” said Ed Hudson, of DatingMetrics.com. “He has the ability to connect with women within seconds by speaking to their emotions. And that’s exactly what he teaches his coaching clients.”

“I met an amazing woman… I am happy with her. Thank you so much for this article.” — Anton, a Global Seducer reader

Men have flown halfway across the globe — from the US to Bangkok — to meet with Sebastian and learn his seduction strategies. The long list of men Sebastian has helped includes everyone from wealthy poker players to 25-year-old virgins.

Sebastian told us one client’s story hit close to home because he had gone through the same heart surgery and had the same scar Sebastian had. Their shared medical history bonded them immediately. The single man had tears in his eyes when he met Sebastian for an in-person coaching session.

“The coaching hadn’t even begun yet, and we were both in tears,” Sebastian recalled. “That was definitely the most emotional moment I can remember.”

It took many years of misery and self-doubt before Sebastian believed he was worth loving. But he did get to that point (and landed an amazing girlfriend), and he knows his clients can, too. Today, he is an encouraging, down-to-earth, and inspirational dating coach for single men around the world. The dating tips in his blog, book, podcast, and coaching sessions are invaluable to active daters who lack the confidence or knowledge to get a date.

In the coming years, Sebastian plans to expand his business to help more people by offering interactive online courses and increasing the number of coaching clients he takes on.

“I try my best to be the best writer, editor, podcaster, and product creator that I can possibly be,” he told us. “I just hope I can continue this amazing journey and help as many men as possible.”