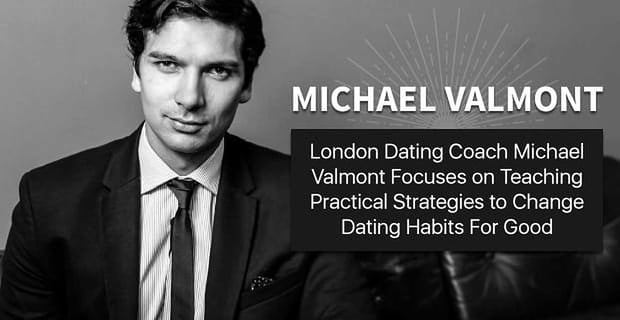 The Short Version: Few motivational leaders make a career out of galvanizing the inner strengths of singles and changing their lives. But Michael Valmont has become a notable dating authority in London because he gets results. Alongside a small team of dating experts, Michael inspires single men to feel more confident and capable in the dating scene. The dating coach’s practical tools and groundbreaking insights build a strong foundation for romantic success. By getting to the root of someone’s dating obstacles, Michael’s coaching team fosters long-lasting self-improvement that transforms every aspect of a person’s life.

Through his work as a London dating coach, Michael Valmont has witnessed many transformative journeys and seen his clients go from lonely singles to self-assured daters. One of his proudest moments as a coach, he told us, came from his consultations with a 22-year-old single with Crohn’s disease.

The single was nervous during their initial meeting, and his hands shook as he described his fears about dating. He’d only had one girlfriend before, and the relationship had ended before his illness, so he worried that romance was impossible now. He saw his health problem as an insurmountable hurdle in his social life.

Michael Valmont, Founder of Core Evolve, is a leading dating coach for men in London.

Michael shared with him strategies to get over his insecurities, grow his self-esteem, and escape the friend zone by being upfront about his desires.

After working with Michael, the 22-year-old came away believing in himself and his ability to change his life. Soon after, he decided to follow his dreams and move to the US to attend an Ivy League university. His health no longer holds him back, and he told Michael he has no trouble finding a date these days.

“That, for me, is the real reward of coaching — to see that transformation,” Michael said. “Learning about dating was liberating for him because he didn’t think it was possible to improve so much.”

As someone who used to be a shy guy, Michael empathizes with uncertain clients like the 22-year-old single looking for love. Today, the seasoned coach devises impactful strategies to motivate singles to evolve into confident daters.

Michael founded a coaching company for single men who want practical strategies to overhaul their romances. A diverse and authoritative team coaches singles in person and via Skype and promotes lasting development in dating and life skills.

“We like to work really deep with people and have a deep impact,” Michael said. “In longer, intensive programs, we want to go through the highs and lows with our clients and address all those insecurities in the dating process.”

Michael described his clients as smart, analytical, and successful men (and some women, too) who simply don’t know how to attract a date. The team’s holistic approach means they advise singles on everything from appearance to conversational style. It’s all about developing the skills that person is missing. With empathetic and honest feedback, the dynamic team gets to the root of the client’s issues and fosters lasting change in dating habits, beliefs, and outcomes.

The Six-Week Mastery program is an intense course designed to accelerate success in a variety of dating scenarios. The course begins with an hour-long consultation with the head coach to talk about the client’s relationship history, strengths, and goals. Michael said the initial consult is really to determine what they can do to help the person get where he wants to be.

“We only take on clients we know we can help,” he said. “It’s not a one-size-fits-all process. We come up with different strategies with every person we work with.”

People fly in from all over the world to consult with this experienced team. If you don’t live in the London area, Michael offers a Seven-Day Immersion program to condense the team’s important takeaways. During the week-long curriculum, singles work with the team for 10 to 12 hours in a day and benefit from extensive trainings.

As part of the one-to-one programs, the dating coaches not only give advice but give people the opportunity to turn words into actions. A professional wingman will actually accompany clients out to a bar or coffee shop where they can practice approaching date prospects and build confidence in a variety of social situations. This experience can be stressful and challenging, but the coaching team’s support encourages clients to move forward, take action, and not let fear paralyze them.

Also, an upcoming course called Online University (client memberships opening up late November 2017) will guide singles with a library of videos, podcasts, and personal stories. The nine-month program will be an affordable way to jump-start your dating life and avoid rookie mistakes. Whether watching hundreds of hours of self-help videos or asking a personal question on the private forum, the online community will inspire singles to make fundamental changes in their love lives and grow in meaningful ways.

Want to learn on your own time? Check out Michael’s YouTube channel and articles on Match and POF.

Michael believes in facilitating self-improvement as a way of prompting dating success. “It helps people learn and keep pushing themselves,” he said. “If you keep putting the work in, you’ll see gradual increases in self-esteem every single day. And you will get better.”

Backed by a Well-Rounded Team With Diverse Skill Sets

Over the years, Michael has surrounded himself with competent and extraordinary individuals who feel just as passionately as he does about helping singles improve and grow in the dating world. His team brings a variety of skill sets to the table, so they can set clients up for success with targeted advice about body language, conversational styles, and social charisma.

“It’s never been just about me,” Michael told us. “I trained people who have different skills than I do so we have this dream team of experts in body language, mindset, confidence, and other facets of dating.”

The coaches convey practical knowledge that can uplift singles long after the session is over. Ultimately, the team’s objective is to lay the groundwork so that, after the six weeks of intensive work is over, their clients can continue to improve on their own.

Liberating Singles by Giving Them the Confidence to Date

Michael is on a important mission to equip singles to become the best version of themselves. His work goes beyond simply tweaking a dating profile — it’s about making deep transformations to a person’s life.

Dating coaching gives singles the tools to turn their lives around and attract the right dates.

When a wealthy man lost his wife of 30 years, he didn’t know what to do next, so he turned to Michael’s consulting team in search of a new lease on life. The heartbroken widower didn’t want a relationship; he just needed to have fun again. Within a few coaching sessions, he rediscovered that spark within himself and felt liberated to move forward.

Another client, a former drug addict, traveled from Bristol to London to learn dating strategies from Michael’s team. After living his life as a slave of addiction, this client felt he was starting from scratch as a single man. His social confidence grew steadily over time as Michael taught him the strategies he needed to succeed.

One day, the client even worked up the courage to climb a steep flight of stairs to talk to a bartender he’d had a crush on for months. That conversation didn’t lead to a date, but it did empower the single man to act on his desires and take risks to get what he wanted. Now he has a girlfriend thanks to the positive mindset instilled in him by Michael’s coaching team.

Often the most important goal the dating coaches have for their clients is to make them feel happy with who they are, regardless of relationship status. That confidence becomes the first step to attracting the right kind of people and being ready for a true connection on equal footing.

“My passion for helping people comes from my own experience of not knowing where to go to get a date,” Michael told us. “I try to not only teach the skills but be an example of what my clients can accomplish and what they can do to change themselves.”

When clients (like the 22-year-old with Crohn’s disease) believe in the lessons of dating coaching and throw themselves into it wholeheartedly, amazing results are sure to follow. Michael Valmont’s online and in-person trainings provide real permanent solutions to dating problems big and small.

Over the past few years, Michael has established himself as an authority in the dating industry and has created a coaching company designed to change the lives of singles worldwide. Together, the team of experts empower people to hone their dating tools and philosophies. By blending practical tips with overarching knowledge, the coaches give clients the framework to learn, improve, and thrive in the dating scene.

“Sometimes people transform just from a 60-minute consultation,” Michael said, “because we really listen to them and challenge them on the stories they’ve been telling themselves. As we learn more about them and work on their issues, we see massive success.”