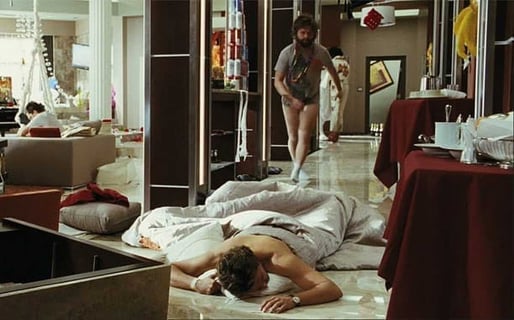 Do’s and Don’ts for Throwing a Bachelor Party

So, one of your best buddies is tying the knot and it’s up to you to plan the bachelor party? This will be his last night as “one of the guys,” so it’s a big responsibility. Get it right and don’t ruin his life before it begins! Follow these simple do’s and don’ts:

1. Don’t wake up in Vegas with a dead hooker in the tub.

Yes, it’s a bachelor party, but forget about the raunchy movie versions that never seem to end well. Get the words “bash” and “stag party” out of your head.

This is a big event for all of you guys. Think of it as a chance to celebrate your friendship, enjoy the groom’s company, and give him a great send-off into married life.

So, the groom won’t get within 10 feet of the dancer. Then you force him to let her sit on his lap while he reenacts the “Home Alone” hands on his face expression for a snapshot. Now somebody posts it on Facebook.

Dude, you just humiliated his bride and threw a wet blanket on his burning romance. She told everyone her man would never touch another woman at his bachelor party, but now there are aspersions and doubt flying everywhere.

Either collect all the cell phones from your guests as they arrive, or make them swear an oath that no pictures will be taken when there is a female in the room. Her mere presence brings all of the night’s activities under suspicion.

You’re in charge, so don’t leave any room for misunderstanding, embarrassment or destroying the bond of trust in your friend’s relationship with his bride-to-be.

No ladies? Does everybody have their pants on? Let the shutters click and the flashes flash.

“Give your friend a night to remember, not

a night of regret that will haunt him.”

3. Do something that has special meaning.

A bachelor party is about your group of guys and your bond. You can make the rounds to some of your favorite pubs for darts and a beer, build it around a Monday Night Football game, play a couple hands of Texas Hold ’em, or start it off with a game of softball or a round of golf.

You don’t want to keep it too pedestrian and ordinary, though, so be sure to do something to up the stakes. Rent a limo, treat him to a prime rib dinner at a nice steakhouse, fly through the local casino for an hour, and get all the guys to chip in on a nice engraved token of your esteem.

It might be an aluminum bat, a crystal beer mug, a gilded putter, or whatever will remind him of the best friends he’s ever had. Oh, and make sure it’s not something his new bride will think is hideous and belongs in the attic.

Don’t get drunk, and don’t let him get too hammered either. You are the social director and possibly the designated driver. If you drink at all, it should be one beer or drink every hour or two, max.

Make sure the groom paces himself, too. Water down his drinks if you have to. There will always be a few characters from “Animal House” at every bachelor party, but don’t let them set the mood or run the show.

Be the host or the maitre d’ during the entire event. Keep things flowing smoothly and in a civilized manner. Have fun but assume the responsibility for the well-being of the whole group, especially the groom.

Be the diplomat who keeps all the tempers cool, and keep a clear head on your shoulders.

5. Do plan out the whole night.

Women plan everything down to the smallest detail, but men tend to fly by the seat of their pants. You don’t have to be as persnickety as a wedding planner for the Queen of England, but you do have to make an itinerary.

If you will be visiting more than one venue, you have to be the timekeeper, you have to know what time you need to move along, and you have to get things ready to move before the last second.

They might not be ready to leave the strip club or the casino when the time is up, but you don’t want to wait until half the guests have said their goodbyes before you get back to your house for the presentation of the gift, a brief speech and the cake.

Leave a little flexibility in your plan when they’re having fun. But when you’re the producer of the show, you have to keep close to the schedule.

Also, be sure to leave at least three or four days between the party and the wedding. A week or more is fine too when you have people’s schedules to consider.

6. Don’t let the groom pay for anything.

This is a night for the groom to feel like a king. His money is no good, unless he’s Donald Trump and you’re Oliver Twist. If the budget is getting a little steep, get the rest of the groom’s party to ante up a little cash.

This is another reason for planning ahead — it will help you keep the budget realistic and give you time to do a bit of fund raising from your friends.

A bachelor party is not about a last fling of hedonism and debauchery before he gets married. He is already committed to his fiance, and any final flings should have been taken care of before that commitment.

Give your friend a night to remember, not a night of regret that will haunt him throughout his coming years as a husband and father. Party hardy, but party smartly.

4 Ways to Create a Proposal She Will Brag About