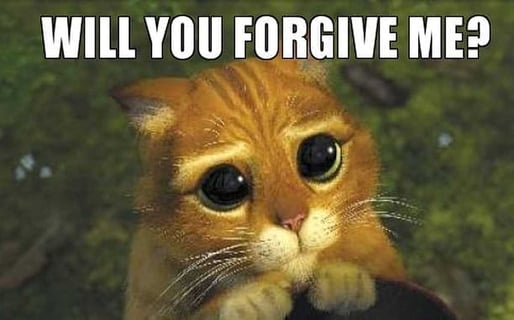 How to Know When to Forgive Her

To err is human. We all make mistakes. Still, there are lines of betrayal that are difficult to forgive when someone we love has violated our trust. Lying, infidelity, abusiveness, public humiliation — these offenses can break our spirit. Should you swallow your pride and forgive her anyway? Maybe. Maybe not.

The answer depends on the seriousness and frequency of her crime, the genuine love in her heart and yours, and the level of her remorse.

Let’s say your girlfriend heard a false rumor about you and another woman. She disregarded your history together and your great record as a boyfriend. She cut up all the clothes you had at her apartment, broke all your CDs, broadcast the false rumors on Facebook, and destroyed your reputation with your family and friends.

Oops. A long couple of hate-filled weeks later, she finds out the real truth, but the devastation of the atomic bomb she set off can’t be fixed quickly or completely. You were both crazy about each other, but can things ever really be the same? Now she is at your mercy. She was wrong. She was stupid. She knows it, and she’s really sorry now. What do you do?

It’s a horrible situation but hers was a crime of passion. There was never really a lack of love on her part. She should have come to you first — that was her biggest mistake. But it’s not the kind of transgression you have to worry about recurring. Your relationship is probably safe in her hands. You might consider cutting her a break if you still love her.

“If one by one we counted people out.

For the least sin, it wouldn’t take us long.

To get so we had no one left to live with.

For to be social is to be forgiving.”

Let’s look at a different scenario.

Your best girl is doing the wild thing with her ex two or three times a week while you’re at work. He’s a big-mouthed jerk, so everybody knows — except you. You’re walking around with the huge horns of cuckoldry on your head for all to see (except for you) while everyone is laughing behind your back.

It turns out they’re even planning a little getaway to Cancun while you’re at a company convention next week. Finally, your best buddy can’t take it anymore and tells you everything. You’re devastated, but you calmly confront her. Her response is, “Oh, who told you? I suppose it was Bobby. That little jerk. OK, I’ll stop.”

Well, this is a horse of a different color. You might be able to forgive one night when she had a few drinks and lost control with her very persuasive ex, but this is a long-term pattern of behavior that makes your whole relationship a lie. It’s the kind of thing you cannot not presume will just stop and remain stopped. And she is not sorry for her behavior. She’s just sorry she got caught. Lower the boom.

No two situations are alike, and no two relationships are alike. It’s best not to make life-changing decisions in the depths of anger and despair, so give yourself a little time before you decide if you can forgive her or not. If you do forgive her, then she has a clean slate, and you cannot rub her nose in it again — unless it happens again.

Ghandi said, “If we practice an eye for an eye and a tooth for a tooth, soon the whole world will be blind and toothless.” The thing about our actions and mistakes is that we can never “undo” them. They are a permanent part of our history. Sometimes the only way to move on with life is to forgive, when that forgiveness is deserved. Surely, the time will come when it is your turn to be in need of forgiveness. That’s when your benevolence in the past might be your “get out of jail free” card when you need it the most.