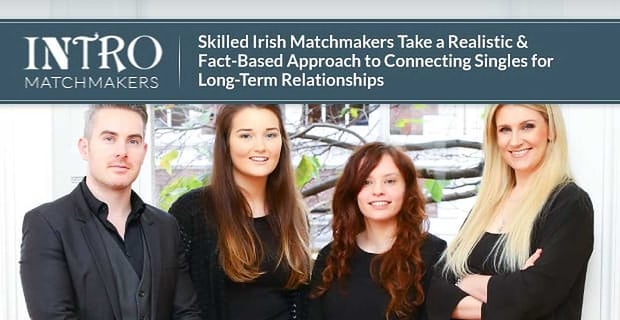 The Short Version: Many singles in Ireland choose to take a passive role in their own love lives, hoping that a relationship will somehow fall in their laps if they drink at the local pub often enough. Intro is an Ireland-based matchmaking agency for daters who’re tired of leaving their happiness up to chance. An experienced team of matchmakers takes the time and effort to arrange first dates based on mutual compatibility. Every week, over 200 clients go on promising dates and provide feedback to the matchmakers. This personalized process has made Intro Co-Founders Feargal and Rena Harrington keenly aware of the dating challenges in Ireland, and they’ve made it their mission to help singles find a relationship. The couple also recently developed a safe dating site called ARealKeeper.ie to authenticate and protect online daters. By offering many trustworthy dating resources, Intro has greatly improved the love lives of Irish singles nationwide.

One morning, an Irish beef farmer was eating breakfast when his girlfriend of seven years and his brother dropped a bombshell on him. They’d been secretly dating one another for the past three years and were getting married in a few months.

Understandably, the beef farmer was heartbroken and adamant that he didn’t want to show up to that wedding alone. He knew he needed help in the dating department, so he turned to Intro, an Irish-owned matchmaking agency in Dublin. The matchmakers took him on as a client and connected him with someone who, on paper, seemed like his polar opposite. For one thing, she was a vegetarian.

The single woman was a well-educated lecturer fluent in seven languages and wanted a partner who was as educated as she was. The matchmakers knew the farmer was her intellectual equal and persuaded her to give him a chance. Their first date was a great success. Months later, she went with him to his brother’s wedding. Now the beef farmer and lecturer are happily married.

Feargal and Rena Harrington were strolling through a dog park seven years ago when they realized how tough it was for couples to meet one another in Ireland. The bar scene was most singles’ go-to method, and it wasn’t really effective.

Feargal met Rena by chance through his brother Eoin Harrington, but most singles aren’t so lucky and spend lonely evenings at a bar with no viable alternatives to improve their love lives.

So, in addition to raising young kids together, the couple decided to start a boutique matchmaking agency that focused on building serious relationships. In 2011, Feargal and Rena founded Intro Matchmaking to open singles up to new dating possibilities. Today, the couple commutes over an hour every day to be in the heart of Dublin on Grafton Street where their offices welcome singles of all ages.

Intro is a fact-based matchmaking company that relies on statistical data to inform the team’s decisions. Every match is made for a reason, and professional matchmakers talk through their recommendations with clients and get them excited about the arranged date. Feargal described the personalized matchmaking systems as more personalized than online dating and more effective than traditional dating methods. The matchmakers facilitate a values-based dating process for Irish singles seeking a long-term connection.

“We deal with people who are invested emotionally and financially in getting a date,” he said. “When you join a dating agency, you’re really taking the plunge and making an effort to meet someone.”

A Small Team Arranges Hundreds of Dates Every Week

In Ireland, many people struggle to find a fulfilling relationship at the local pub. Singles may not like shining a light on their problems, but ignoring the subject certainly hasn’t been working for them. Feargal told us nearly 2 million people in Ireland are currently single. “In a country of only 4.6 million people, that’s outrageous,” he said.

Intro Matchmaking aims to give singles a way out of their dating troubles and into a lasting relationship. Instead of passively sitting at a bar and hoping true love comes to them, single men and women can take advantage of a curated dating network that has proven successful over the years. People as young as 21 and as old as 84 have come to the Irish matchmakers in hopes of finding love — and one in four have ended up in long-term relationships.

“Into Matchmaking is a professional face-to-face Irish dating agency that takes pride in offering Irish singles an honest, open, and stress-free alternative to online dating.” — Intro’s about page

The five-step matchmaking process provides hands-on dating assistance from the intake call to detailed feedback sessions. Every week, a team of six professional matchmakers pair 100+ daters with compatible goals, values, intelligence, and personalities. They do all the legwork to schedule the date and make the necessary reservations, so all singles have to do is show up. Then, on the following Monday, the team calls every person to ask how the arranged date went. They make in excess of 200 calls to make sure their clients are satisfied and successful.

“Irish people tend to keep everything quiet, sweep it under the rug, and hope eventually something will happen,” Feargal said. “Obviously, that doesn’t make sense, so we decided to become the most private and confidential matchmaking service in the country to see dating done right.”

Oftentimes, the team’s focus is on setting realistic expectations. Feargal told us the most common issues arise over the client’s high standards in a match’s age, location, and education. A 50-year-old wants a partner 20 years younger or a small-town single wants a lover who lives next door. The matchmaking team won’t take on a client who binds their hands by having unrealistic expectations about the date prospects in their area.

“We concentrate on what stops people from success; it could be massive, or it could be tiny,” Feargal explained. “Generally, our clients are much better off when they let go of the idea of a perfect match and put their trust in us.”

Intro Matchmaking doesn’t force time limits on love, which means the matchmakers will continue seeking dates for as long as the client wants them to. Memberships can be put on hold for three months for no extra charge. Every week, around 50 couples go on hold to pursue a relationship and many stay together beyond the three months.

“Our clients have a full life, a happy career, and good friends,” Feargal said. “They come to us because they want to enhance what they’ve got going on.”

In recent years, Intro Matchmaking has expanded its services and resources into a new venture: a dating site. ARealKeeper.ie is a relationship-focused dating site for Irish singles who want to find matches on their own time. “It’s built completely bespoke,” Feargal said.

After five years of talking to singles at his matchmaking agency, Feargal saw a need for a private and secure dating site. Irish singles voiced frustration with misleading and fake dating profiles, describing an unsafe online environment where genuine connections were rare. Feargal and his wife decided to build a better tool for authentic and love-oriented daters. On ARealKeeper.ie, daters can trust the quality of the membership.

Additionally, to ease safety concerns, ARealKeeper.ie has a system set up to record where and when members’ first dates occur. You can let the site’s admins know when you’re going on a first date with an ARK member for added peace of mind. The trustworthy dating network brings a sense of accountability to online dating, creating a more enriching and secure experience all-around.

“I was so sick of dating, meeting the same types of guys every weekend,” wrote Suzanne, a 29-year-old Dubliner, in a testimonial. “I was about to give up. So glad I tried ARK, otherwise I wouldn’t have met Colm. He’s my lobster!”

Since 2011, Intro Matchmaking has helped thousands of couples and has built a national reputation as one of the most effective resources for relationship-ready people. Feargal said about a third of clients come to them through referrals, and the testimonials page is brimful with compliments.

“The staff at Intro were amazingly supportive and understanding,” wrote Kate, a single woman in Dublin, who met her long-term boyfriend through the agency. “I loved that all the dates were arranged — that took the pressure off.”

“You guys tell it like it is, and, at first, it was hard to hear, but I can honestly say I needed to hear it. We are just both over the moon.” — Elaine, an Intro client who’s now engaged

Intro’s matchmakers sometimes have to get clients to open their minds and let go of arbitrary dating standards. For example, one woman rejected a potential match because his name was Ben, and she wasn’t attracted to Bens. After getting over his initial shock, Feargal pressed the issue and argued that she was rejecting a perfectly nice guy for no good reason. The single woman brought up Ben’s career as another disqualifying feature because she wasn’t interested in dating chemical engineers.

Feargal persisted, saying, “If he were to be as judgmental about your career as you are about his, he’d say you’re boring because you’re an accountant. But you’re not. So, what about it?” Luckily, with some persuading, the woman reconsidered her position and agreed to give the chemical engineer a shot. Now they’re married. It turned out, she was attracted to this Ben.

“People shoot themselves in the foot left, right, and center,” Feargal concluded. “It’s our job is to say ‘Stop, you’re being ridiculous.’ In a nice way.”

Sometimes the best thing the Intro matchmakers can do is help Irish singles get out of their own way on the road to happiness. They expand the horizons of Irish daters across the country by looking outside the box to create matches between, for instance, a learned lecturer and a beef farmer. These two different people may never have met or thought they would make a suitable match, but now they’re happily married.

The matchmaking process led the lecturer to realize her own standards weren’t really what she wanted in a partner. “When I came to Intro, I was looking for a red bike,” she recalled. “But I ended up with a blue bike, and I’m more than happy with my blue bike.”

Feargal and Rena are working to transform the Irish dating culture and give people safe, authentic, and effective means to get in a relationship. From the intuitive matchmaking of Intro to the trustworthy dating networking of ARealKeeper, these accomplished dating experts bring together hundreds of Irish singles every day.

“We’re trying to take over the dating world in Ireland,” Feargal said with a laugh. “It just takes a little persuasion to tell people that they need to get rid of their initial perfect match and just let their guard down. It’s all about compromise and flexibility.”